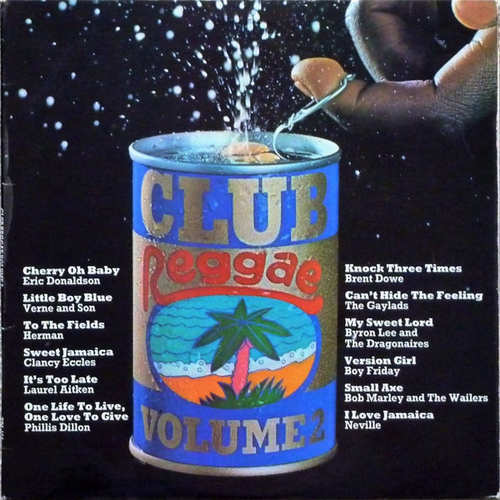 Side One
1. Eric Donaldson – Cherry Oh Baby
2. Verne And Son – Little Boy Blue
3. Herman – To The Fields
4. Clancy Eccles – Sweet Jamaica
5. Laurel Aitken – It’s Too Late
6. Phillis Dillon – One Life To Live, One Love To Give

One of the best Reggae albums that was released in 1971 was CLUB REGGAE which featured the most popular Reggae tunes in the discotheques at the time. This was such a successful album that it had to be followed by a second one, and this is it.

The LP starts off with the then 23-year old Eric Donaldson with CHERRY OH BABY, a song that won a gold medal in 1971 at the Jamaican Song Festival. The next track is LITTLE BOY BLUE by Verne and Son and is an uncompromising Reggae sound that has a tight yet swinging guitar and organ. This was produced by Alvin Ranglin for his G.G Records label. TO THE FIELDS comes next and is performed by Herman who is in fact Herman Chin-Loy, the owner of Aquarius Records. Next, we have SWEET JAMAICA by Clancy Eccles with an organ and piano intro along with a creeping technique that Clancy had used on some of his other recordings. Laurel Aitken has been on the Reggae scene for many years and he appears next with IT’S TOO LATE, his own composition that sounds like the Drifters from the early ’60s even though it has the Aitken stamp on it. A female artist is next in the form of Phillis Dillon with ONE LIFE TO LIVE, ONE LOVE TO GIVE, a song that took her into the Jamaican Top Ten for the first time.

Every now and then a pop tune comes along that is suited to the Reggae rhythm and this is the case with KNOCK THREE TIMES by Brent Dowe who was the lead singer with The Melodians. This was his first solo release, produced by the late Leslie Kong for Beverley’s Records in Jamaica. Former label mates of The Melodians were The Gaylads, who come next with CAN’T HIDE THE FEELING which is probably the best record they had released up to then. It has a great vocal arrangement and a superb production. Byron Lee and The Dragonaires come along with their version of George Harrison’s MY SWEET LORD which has Keith Lynn on lead vocal. This was one of their most requested songs when performing live. At the time of this album’s release, the Reggae known as ‘Version’ was becoming popular and the next track was this and features Boy Friday with VERSION GIRL. Boy Friday was a relatively unknown artist but sounds suspiciously familiar. Moving onto the last track we find the legendary Bob Marley and The Wailers with SMALL AXE, which has the usual Marley feel and has Peter Tosh helping out on lead vocals. Finally, we have I LOVE JAMAICA by Neville, a song released out of Federal Records in Jamaica and although it has a Reggae feel the vocal has a Calypso feel.

All in all, this adds up to a fine album and back in the day it cost 99p.

Herman – To The Fields