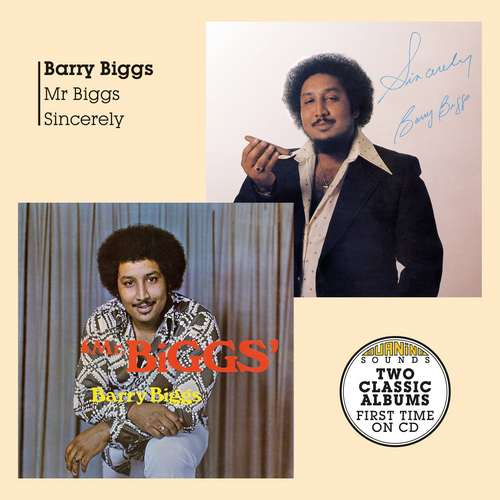 Barry Biggs, born 1946 in Kingston, made a living as a recording engineer and cameraman with the Jamaican Broadcasting Company, but was “destined to be a singer”. In 1970 he recorded a single for Harry Johnson and joined Inner Circle as a singer. After that, he moved to The Astronauts, “a fantastic band, but we only ever made two records”. His career really took off when he was asked to join Byron Lee’s band. Byron was looking for a vocalist with a voice in the genre of American soul groups such as The Stylistics and The Delphonics. He scored an impressive string of hits, mostly covers of popular soul tunes. Contrary to the roots/rasta trend in reggae during the 1970s, the sweet-voiced singer continued to focus on songs in the romantic genre, the genre in which he excelled and felt at home. His version of Love Come Down, originally recorded by Evelyn ‘Champagne’ King, was a top 5 hit in 1983 in The Netherlands. His output declined after the 1980s, but last year he surprised us with the release of a new album, recorded at the Heavy Beat Recording Studio in Miami.

Recently Burning Sounds released the first two albums on a double CD. It concerns the albums Mr Biggs from 1976 and Sincerely from the following year. A total of seven bonus tracks have been added in this release. This double first time on CD set includes the four hit singles Barry had in the UK in 1976 and 1977. Mr Biggs features Work All Day, No.38 in August and Sideshow No.3 in December 1976. The album Sincerely contains You’re My Life, No.36 in April and Three Ring Circus No. 22 in July 1977.

Among all the sweet, romantic songs we were able to find some roots-like songs. There’s his hit Work All Day, of course, but also Barry’s version of Jimmy London’s The Road Is Rough, one of the bonus tracks, sees him in a roots fashion. The dub version of Work All Day has also been added as a bonus track, named Play All Night. There are also several ballads on the album. His take on The Delphonics’ hit La La Means I Love You follows the original quite closely. The self-written tune You’re My Life is also a ballad. The Girl I Knew is a soul tune that reminds us of the Philly Sound of that time. There are three versions of the song Got To Be Mellow, two vocal versions and the instrumental version called The Recognition.