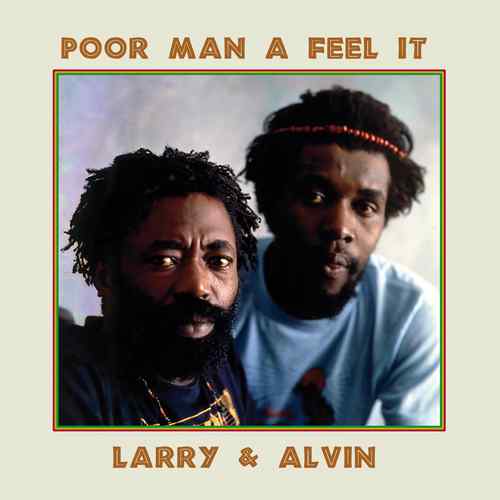 Simultaneously with the release of U Roy’s ‘forgotten’ album Dread In A Africa from the mid-’70s, Dutch reissue label Jamaican Art Records has put out an even more rare album by Jamaican singers Larry Marshall and Alvin Leslie who together formed the duo Larry & Alvin. Backed by a group of musicians, well-known to many reggae fans under the name of The Revolutionaries, the duo started to record songs for producer Alvin ‘GG’ Ranglin which should lead to the release of a full-length album in 1978. But as it happens sometimes the material was never issued with the exception of the song Last Nite, which hit the streets in 1981 on Ranglin’s Hit label. While Alvin Leslie, who did the back-up vocal, vanished in oblivion, Larry Marshall went on to release singles and albums in the late 1980s and early 1990s.

Although relatively unknown to the general public, Larry Marshall – who died from complications of Alzheimer’s disease on August 24, 2017 – was one of the unsung heroes in Jamaican music history. He was a very talented songwriter with a unique, yet typical Jamaican voice. Born in 1941 in Lawrence Park in the parish of St Ann, he left for Kingston in 1957 in search of a music career. Between 1962 and 1967, he had minor hits for producers such as E. Henry (Too Young To Love), Philip Yap (Promise Is A Comfort To A Fool and Snake In The Grass), Coxsone Dodd (Please Stay), and Prince Buster (I’ve Got Another Girl and Suspicion). However, his greatest successes came in the late 1960s when, in addition to his work as assistant engineer, writer, arranger, and dub-plate seller at Studio One, he teamed up with Alvin Leslie to form the duo Larry & Alvin. Their massive Jamaican hit Nanny Goat, which is regarded as the record that began the shift from rocksteady to early reggae, is a true classic and so are Mean Girl and Throw Me Corn, all three of which the riddims were recycled extensively over the years as is customary in Jamaica. In 1973, Coxsone Dodd released Larry Marshall’s album Presenting Larry Marshall. After leaving Studio One in 1974, he released the 1975 single I Admire You, followed by the album of the same name for Carl Patterson’s Black and White imprint. In 1974, Larry Marshall left Studio One due to disputes over royalties and other growing tensions and released the album I Admire You a year later. And there’s also another Larry & Alvin album, the very rare In Jah Corn Field, produced by Errol Geraldine and released on the Jumbo International label in Jamaica only. After the release of several ‘Gussie’ Clarke produced singles in the mid-1980s – including remakes of Throw Me Corn and I Admire You – and the albums Dance With Me Across The Floor (1988) and Come Let Us Reason (1992) – he emigrated to Miami. Having not received a significant financial reward for his musical career, he supported himself by working on building sites.

The producer of Larry & Alvin’s Poor Man A Feel It is Alvin ‘GG’ Ranglin who started to sing in public in his teens and was briefly a singer with Gladstone Grant and Vernon Buckley of the Maytones before he became their manager and then successfully started to produce them. After producing artists like the Maytones, Winston Wright, Monty Morris, Carlie Ace, Keeling Beckford, and The Slickers, returned as a singer with Alphonso Flowers in 1971 under the name of Flowers & Alvin. The financial rewards of licensing his productions to Lee Goptal of Trojan Records and the Palmer Brothers of Pama Records who released them in the UK between 1968 and 1973 helped Alvin Ranglin a lot to build up his business and stable of artists. And thus Alvin Ranglin became an unstoppable force in Jamaican music. It actually was Gregory Isaacs who gave him his first international hit with the 1974 single Love is Overdue and from 1974 to 1977 cemented the producer’s reputation with a series of stunning singles and LPs such as In Person, and the two Best Of volumes. But also artists such as Dennis Brown, Freddie McKay, I-Roy, Trinity, and Lone Ranger gave him hits in the ’70s, while the early ’80s saw him release great music by artists like Sugar Minott, Culture, George Faith, Lady Ann, and Barrington Levy, with whom he enjoyed a string of hits. For long-time reggae fans, most outputs on Alvin Ranglin’s label have always been highly collectible. To these fans’ delight, there’s Larry & Alvin’s must-have LP Poor Man A Feel It to add to their vintage collection.

As already stated, this Larry Marshall LP was slated for release in 1978, but only one of its tracks, Last Nite, saw the light of day in 1981 on the Hit label’s 7″ vinyl. Then, in 1997, four never before released songs of the Larry & Alvin album were included on a compilation CD titled Jamaica’s Reggae Stars – Volume 1 – The Singers, which was issued by Dutch independent record label Jamaican Gold. At the time plans were made for a full Larry & Alvin album release to follow soon. However, it all went down the drain after the Jamaican Gold label was terminated in 2001. And although one would think that the saying ‘tomorrow never comes’ would be applicable here, some 25 years later the initial plan finally became a reality through the positive input of Alvin Ranglin and the Jamaican Art Records team. All tracks are transferred directly from the original mastertape in Jamaica.

Poor Man A Feel It

Titled Poor Man A Feel It, the 10-track LP features the previously released tracks Last Night (aka Last Nite), Africa, Woman, Why, Why, Why, and Sadness & Misery plus 5 tracks that were kept in the vaults of Alvin ‘GG’ Ranglin. The riddims for all songs were laid by the stellar Revolutionaries at Channel One, while the voicing and technical mixing were done at Harry J Recording Studio on 16-tracks by Sylvan Morris. Those familiar with Larry Marshall’s music know that he’s a great singer and songwriter and this album underscores that once again. His emotional and intense voice, heavily influenced by the Revival church and Folk traditions in Jamaica, along with the back-up singing of Alvin Leslie makes it a true joy to listen to this wonderful collection of tunes. On both sides of this black vinyl disc Larry & Alvin create an incredible atmosphere with well-produced songs that range from pure roots music like the huge Africa and the title track Poor Man A Feel It to love ballads such as I Have Got Another Girl and the lovers laments Why Why, Why and Please Stay – an updated version of the song Larry Marshall recorded for Coxsone Dodd in 1965 and for Clancy Eccles in 1968. Each and every tune is definitely worth going on repeat with personal favourites being Spider & Fly and Sadness & Misery.

Both Alvin ‘GG’ Ranglin and the team of Jamaican Art Recordings deserve the utmost respect for offering a brilliant album to fans of the golden era of reggae music.

Conclusion A brilliant album that will surely please fans of the golden era of reggae music.