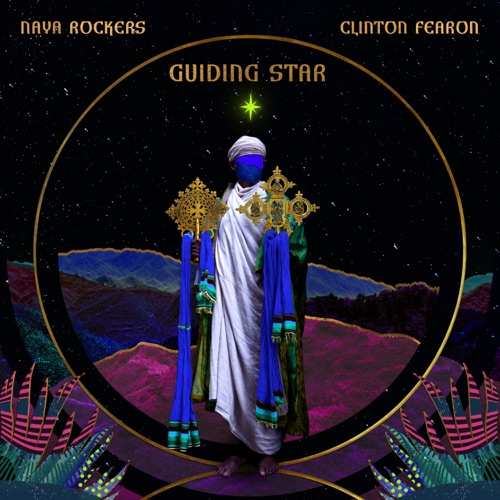 1 Guiding Star
2 Guiding Star (Extended Version)
3 Guiding Star (Instrumental Version)
4 Guiding Star (Andy Bassford Guitar Version)
The single Guiding Star, released by Naya Records, is an inspiring collab between reggae legend Clinton Fearon and Naya Rockers, the band of drummer Nathan Sabanayagam and bassie Nate Edgar. The band has built up a firm reputation as a solid backing band for big names in reggae, such as Stephen Marley, Big Youth, Bushman, Barrington Levy, The Skatalites, Blakkamoore, Addis Pablo, Iba Mhar…. the list is almost endless. We don’t need to say much about Clinton Fearon, known as the bassist of the legendary Jamaican group, The Gladiators. He has shown since the start of his solo career in the 1990s that he still counts as an artist in the current reggae scene.

The promo CD single we received contains no less than 4 versions of Guiding Star. This 100% pure-roots Nyabinghi song will not leave you indifferent. Lyrically it’s a masterpiece, bringing a message of spiritual and environmental consciousness, strictly positive vibes. The vocals are perfectly embedded in a vibrating, spacy dub-esque backdrop. That combination leads you, if you are sensitive to it, to higher realms. Guitarist Andy Bassford’s input, the musician who has played with many legendary reggae artists, allows his magical guitar sounds to subtly wander into the drum and bass foundation of the song. This is music for the heart and soul.