U-Roy – Dread In A Africa 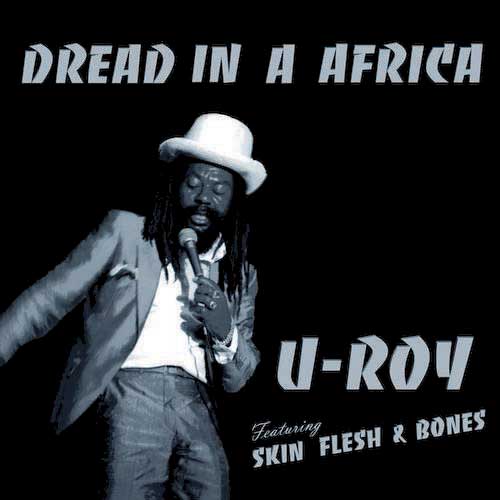 Though U Roy wasn’t the first deejay to put his toasts — the reggae-birthed precursor to rap — on records, he is often referred to as the “Originator” because of the unprecedented popularity of his early singles and the influence of his distinctive style, which caused the 1970s birthed scores of imitators. U Roy’s style of toasting over a riddim was radically different from that of people like for example Count Machuki. His rich-toned voice proclaimed sizzling, jive-saturated lyrics rather than simply inserting a few phrases. And besides that, he rode the pared-down instrumental track all the way through, rather than interjecting at crucial points.

U Roy debuted on record in 1969 when Keith Hudson produced his single Dynamic Fashion Way. In the same year, he also recorded for Lee Perry and Bunny Lee, but it wasn’t until the next year that he started to become successful and well recognized. For Duke Reid’s Treasure Isle imprint he recorded Wake The Town, Rule The Nation, and Wear You To The Ball, which held the number one, two and three position in the Jamaican charts for six consecutive weeks. His time with Duke Reid brought him a whole heap of hits, all being deejay versions of rocksteady tunes. It was this fruitful period in his career that established his name as a trendsetter in the music of Jamaica. Although he went on to make records with producers like Joe Gibbs, Lloyd Campbell, Winston “Niney” Holness, and Alvin Ranglin, he quietly faded from sight. In 1976 U Roy returned to the forefront of reggae music with the brilliant Prince Tony Robinson produced album Dread In A Babylon. The latter revived U Roy’s career and he proceeded to record strong music for Prince Tony and Bunny “Striker” Lee.

Popularity intact, his output slowed in the 1980s. The Mad Professor teamed up with him for the monster True Born African (1991). The new millennium showed no signs of stopping U Roy. Tabou Records released two great albums, Serious Matter and Now, which showed the artist shining with the likes of Dennis Brown, Ernest Wilson, and Alton Ellis. His most recent efforts have been Rebel In Style, Old School New Rules, Pray Fi Di people and Talking Roots. His Stur Gav Sound System, which features top deejays like Ranking Joe, Charlie Chaplin, U Brown, and Josey Wales, ranks among the most popular in Jamaica and frequently tours the US, Europe, Japan, and the UK. He passed away on the 17th of February 2021, aged 78.

After reissues of Lovindeer’s top-ranking 1982 LP De Blinkin’ Bus and The Ethiopian’s album Open The Gate Of Zion, Jamaican Art Records now offers the fans of vintage reggae the ‘forgotten’ album by U-Roy, Dread In A Africa. This reissue is enhanced by extensive sleeve notes, including an interview with U-Roy. The album was produced by Alvin Ranglin in 1975, and scheduled for release in 1976. However, a part of the original tapes was lost in a fire, so Alvin Ranglin issued the album in a blank sleeve with additional tracks by Skin, Flesh and Bones. This band consisted of the top session musicians of the time: Sly Dunbar on drums, Dougie Bryan on bass, Ranchie McLean on guitar, and Tarzan Nelson was the man on keyboards.
Alvin, a radio and television technician, got involved in the jukebox industry and started his own soundsystem. The step to producing artists was quickly taken, and so a successful career developed as a producer for artists such as The Maytones, Gregory Isaacs, Dennis Brown, Max Romeo, I Roy and Barbara Jones.

Dread In A Africa

The reissued LP contains 12 tracks, two more than the 1975 original. As mentioned before, it is a combination of instrumental tracks and vocal tunes, without hesitation performed by U-Roy. A blissful moment of recognition at the first tones of the opening track as we were touched by the classic reggae vibes! U-Roy expertly rides across the riddim of Gregory Isaacs’ hit stunner Love Is Overdue. Also in the next track, a less well-known Gregory Isaacs’ song is used as backdrop, namely Financial Endorsement. Track three uses another classic Alvin Ranglin riddim, this time Madness, the signature tune of The Mighty Maytones.

We immediately recognized Dreadlocks In A Africa and Nana Banana, which appeared in 1977 on a 12 inch, of course in extended mixes. Dreadlocks In A Africa was renamed Carolyn for that release, a hint to the original riddim, Hello Carol by The Gladiators. The tune with the curious title 354 captures U-Roy combining his toast with fragments of Barbara Jones’s Walk Through This World. Pure Ites! The dub version of this song can be found as the closing track of the album, Dreadlocks Dub. Idlers Rest is the organ driven dub/instrumental of Dreadlocks In A Africa, followed by Ghetto Dub a drum and bass workout that uses the melody line of Bob Marley’s Bus Dem Shut (Bredda Pyaka). Rental Skank subtly transforms the song Nana Banana into a relaxed dub exercise.

Conclusion Not to be missed reissue!