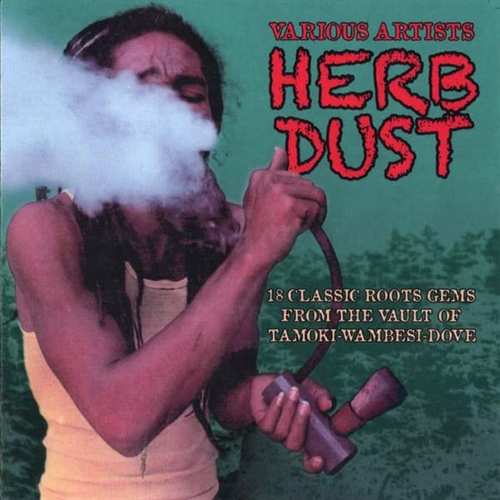 Since Roy Anthony Cousins, founding member of The Royals, started to produce his own works and that of other artists at the beginning of the 1970s, he has released a trailer load of music on his own record labels which include Uhuru, Tamoki, Wambesi, and Dove. In 1983, he put out a neat 10 track compilation LP called Herb Dust Vol. 1 which appeared on Kingdom Records in the UK. Although this CD has the same title as that vinyl LP, it doesn’t feature most of the tracks of that set. Artists such as The Kingstonians, Scunna, Hal Nicholson, and ‘Gladdy’ Anderson aren’t around on this 18 track CD release. Only Vinnie O’Bryan’s Painful Memories aka Heart In Pain was also featured on the tracklist of the 1983 LP.

The Herb Dust CD features a nice mixture of roots & lovers tunes and includes recordings done at studios like Channel One, Aquarius, Randy’s Studio 17, Dynamic Sounds, and Tuff Gong Studios by well-known names such as the singers Lloyd Charmers, Ken Parker, Earl Cunningham, Junior English, Knowledge, The Royals, and Ken Parker. But there’s also material from deejays like Prince Far I, I Roy, Prince Hammer, and Charlie Chaplin as well as lesser-known artists included here. Forces of Music, the studio band that laid down the riddim tracks, contains some of Jamaica’s best musicians such as Phil Callender, Leroy ‘Horsemouth’ Wallace, ‘Style’ Scott, Robbie Lyn, ‘Gladdy’ Anderson, Earl ‘Chinna’ Smith, ‘Flabba’ Holt, Bingy Bunny, Ansel Collins, Pablove Black, Dwight Pinkney… and the list goes on. Unfortunately, no information whatsoever about the years the tracks were recorded, but one can hear that some of them feature overdubs and additional instrumentation (saxophone, trumpet & flute). As is more often the case with releases of CD compilation on Tamoki-Wambesi-Dove, Roy Cousins has been fiddling around with titles of tracks – George White´s Don’t Forget is titled I’m Going To Miss You on the Flowers In The Desert CD – which doesn’t make it easy to find out if a tune has already been featured on another selection from the label. However, this doesn’t imply that it ain’t a worthwhile collection, because it truly is as it contains enough tunes worth hearing.

This surely goes for the opening track, Mashasa by The Royals with an intro by Baba Dread and the great Ernest Ranglin on lead guitar is a wonderful classic tune across a very familiar sounding riddim. And talking about riddims, probably the best known that are heard on this set are Pick Up The Pieces (Prince Hammer’s Pow-Wow and Charlie Chaplin’s Tony Welch) and If You Want Good (The Royals’ Patient Man and Prince Far I’s Dib-Kan). In particular several of the roots tunes included here are a real joy to listen to, although the tunes that deal with affairs of the heart create enjoyable moments too – think Earl Cunningham’s Vera Young and George White’s Don’t Forget. Prince Hammer’s deep roots song Uprising is one of the highlights and this also goes for Knowledge’s House Of Prophet, while The Royals’ Patient Man – an ‘updated’ version of If You Want Good – and Prince Far I’s Dib-Kan on the same riddim track aren’t far behind. Fans of instrumental reggae will surely enjoy Lloyd Charmers organ-led Wanbera and 15 Gambier Terrace L1 by Forces Of Music.

Conclusion To sum up this compilation from the vaults of Tamoki-Wambesi-Dove one simply has to say that it is worthwhile adding to any reggae collection.