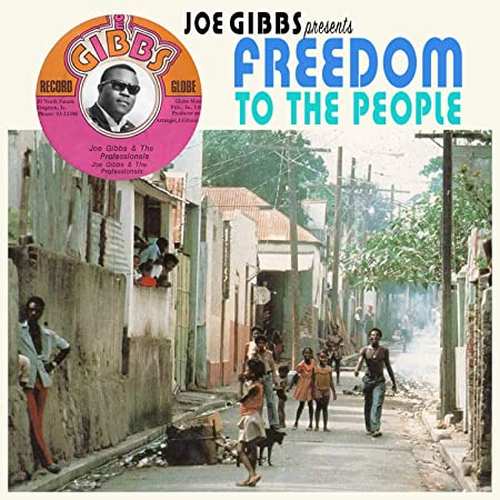 It was the start of the 1970’s and a number of up-and-coming record company bosses were coming into their own and challenging Jamaica’s best. Jooe Gibbs along with Lee ‘Scratch’ Perry, Harry Johnson, Bunny Lee, Winston Riley, and the focus behind this collection Joe Gibbs. Including the very best of Joe Gibbs output from 1971 to 1972, it concreted his reputation as one of Jamaica’s top producers. Numerous tracks on the collection come from two albums, ‘The Heptones And Their Friends Meet The Now Generation’ volumes 1 & 2. The collection features 54 tracks, some Reggae hits and long-lost gems that have been unavailable until now. We now take a look at a selection of these tracks.

Track 1: THE GARDENER – Judy Mowatt. Remember this from volume one of the above-mentioned album and it comes with a pounding rhythm track. Judy is on top form and the overall sound is haunting. Judy went on to become a member of The I Three’s backing vocalists for Bob Marley. Track 3: REBELUTION – Winston Wright & The Destroyers. This comes with the rhythm track from The Abysinnians’ ‘Satta Massa Gana’ and comes with the expected organ from Winston Wright. The original lends itself well to this version. Track 6: HOW YOUR PANTY GET WET – Stranger & Jimmy. This fast-moving number features Stranger Cole and Jimmy Riley who come up with a catchy ditty. The rhythm track sounds as that from the classic ‘Ride Your Donkey’. This comes co-written by the vocalists. Track 11: HYPOCRITE – The Heptones. This may well be familiar to a large number of Jamaican music fans and this was the group’s biggest hit for Joe Gibbs. Comes with a pounding rhythm track and a smooth vocal and chorus. This was a re-make of an unreleased Studio 1 track. Track 14: UPSETTER VERSION – Denis Alcapone. Here we have Dennis in full flow on a version of Lee Perry’s Rock Steady classic ‘I Am The Upsetter’, it is a riot of a tune. Unfortunately, it failed to make the UK 45’s chart but was a classic of the DJ era. Track 17: GOD BLESS THE CHILDREN – The Heptones. This song written by the great Billie Holliday may well be remembered by Jamaican music fans recorded by Nicky Thomas. This version is less commercial and comes with a pounding rhythm track and various combined vocal throughout. Track 21: RIVERS OF BABYLON – Prince Student. Not much is known about the vocalist, there is a singer and DJ on this number and who is which is anybody’s guess, he could have been both. The Melodians also recorded a well-known version which did rather better sales-wise. Track 25: I’VE GOT A FEELING – The Heptones. Another cool slice of Reggae from this outfit and again comes with classic backing vocals from time to time. Percussion is used on the rhythm track and one ends up listening to a catchy, toe-tapping sound. Track 27: MAINGY DOG – Winston Scotland. This track concludes disc one and is a talk-over sound in the vein of U Roy and is a version of the original Peter Tosh recording. Fine organ work on this, could be Winston Wright. If you like talk-overs you will go for this.

Track 3: OUR DAY WILL COME – The Heptones. This was originally recorded by Ruby & The Romantics back in 1962 and reaches No.1 on the American Billboard chart. This is a fine version and comes with a chug-along rhythm track behind a lead vocal Leroy Sibbles helped out by the other group members. The Heptones always came up with classic recordings. Track 5: THE DYNAMIC KEN PARKER (Medley) – Ken Parker. This is as the title says a medley of the best tracks recorded by Mr Parker and features recuts of ‘Only Yesterday’, ‘True True Love’, ‘My Whole World Is Falling Down’, and ‘The Chokin’ Kind’. All covers of original hits and they blend in well together. Track 9: WARIEKA HILL – Junior Byles. This is a chug-along number with Byles and The Versatiles singing along together. The rhythm track comes straight and is not far short of being a Skank recording, it is written by Junior Byles and will be remembered by many Jamaican music fans. Track 11: RUEBEN – Winston Wright and Larry McDonald. This was composed by Joe Gibbs and comes with fine piano playing over a mid-tempo rhythm track. Larry McDonald is a legendary percussionist and this instrumental is catchy even though simple in make-up. Track 14: BY THE RIVER BROWN SUGAR – Cat Campbell. This recording was originally out as a 7″ single on Joe Gibbs Pressure Beat label and is written by the vocalist. This is a mid-tempo, talk-over sound with Cat’s voice high-pitched in front of a punchy rhythm track. Track 16: JUST ANOTHER GIRL – Errol Dunkley. This mid-tempo number has the usual Errol Dunkley vocal that makes him sound young, he was only 21 in 1972. This release took him back to the Joe Gibbs label before zig-zagging around various labels. On this, he is helped out vocally by his backing outfit. Track 18: ETHIOPIA (TO JAMAICA) – Leroy Smart. Starts off slowly and keeps the tempo into a Reggae sound on which Leroy’s vocal is semi-spoken. Overall this is a very basic slice of rootsy Reggae, written by Leroy Smart. Track 20: LET TRUE LOVE BEGIN – Uriel Aldridge. Another track written by the vocalist of whom nothing much is known about. This fast-moving number could be classed as love Reggae and comes with a female chorus from time to time. The rhythm track is basic and we end up with a pleasant track. Track 23: FREEDOM TO THE PEOPLE – The Heptones. This has the rhythm track from ‘God Bless The Children’ that was recorded by Nicky Thomas way back in 1970. The rhythm track was used on several recordings that came out of the Joe Gibbs studio, with different titles. It is a mid-tempo sound given the full-on treatment by one of Jamaica’s top outfits and catchy. Written by Joe Gibbs. Track 25: SCREW FACE SET YOUR PEACE – Winston Scotland. The vocalist was a DJ back in the early ’70s and on this Winston gives a talk-over vocal over the ‘God Bless The Children’ rhythm track. The trombone playing at various times is a feature on what is one of Winston’s rare journeys into a recording studio. Track 27: MAKE LOVE NOT WAR – U Roy. Starting with the expected U Roy talk-over intro it moves into a mid-tempo sound once again using the ‘God Bless The Children’ rhythm track. U Roy only vocalises on the intro, unusual for a U Roy credited recording. This comes as the final track on the collection.

To sum up this 2CD collection, it is full of Joe Gibbs produced hits along with an impressive number of long-lost gems. A number of the tracks are versions of the other tracks, having said this the 54 track collection makes a good addition to any vintage Jamaican music collection.