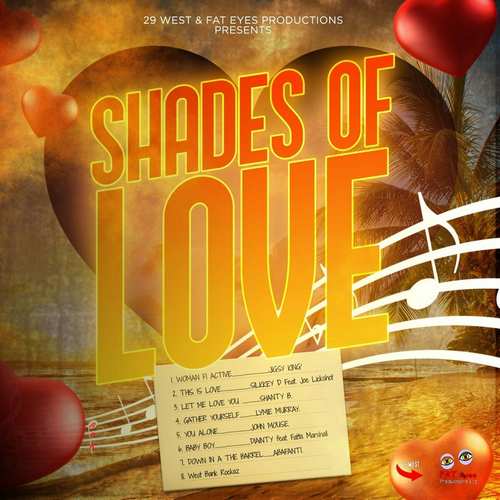 While former member of the Fat Eyes crew, Collin ‘Bulby’ York, comes up with a relicked version of the Jah Shakey aka Far East riddim, producer/engineer Lynford ‘Fatta’ Marshall presents a lovely fresh original riddim on Shades Of Love.

The tracklist of Shades Of Love features the names of seasoned artists like Lymie Murray, Jigsy King, and John Mouse as well as upcomers like Shanty B, Abafanti, and Diainty. And it’s title indicates, Shades Of Love features a riddim with a strong lovers vibe, which however doesn’t imply that every track deals with affairs of the heart. It are Abafanti’s great social commentary Down In A The Barrel, Jigsy King’s solid message tune Woman Is Active, and the uplifting Gather Yourself by Lymie Murray which show that you don’t necessarily need to deliver a love song across this riddim to leave a good impression. Silkkey D’s nice This Is Love feat. Joe Lickshot gets the lovers train going followed by Shanty B with the really appetizing Let Me Love You . Veteran singer John Mouse, given name Michael Hutchinson, shows that he’s still capable of coming up with a steady song. Next comes Diainty’s golden voice which can be fulljoyed while listening to Baby Boy. Only seven vocal cuts here, but you’ll surely enjoy them all on some level.