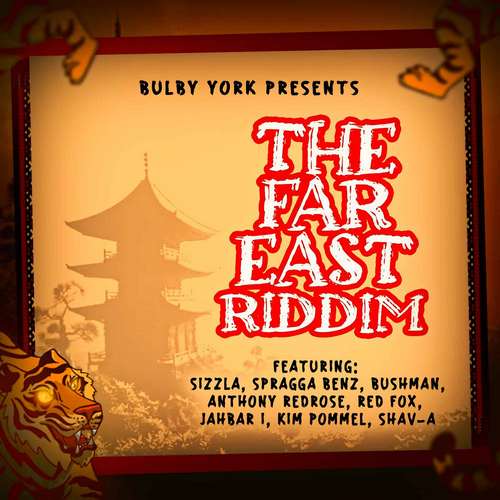 Although named after Barry Brown’s popular tune for Channel One Far East, the riddim was originated by sax player Roland Alphonso whose irresistible Studio One instrumental Jah Shakey was the first tune with that riddim. As has been the case with many Studio One riddims, this one has been relicked countless times since it was cut in the rocksteady era. More than five decades after the riddim saw the light of day, producer/engineer/label owner Collin “Bulby” York, whose talent was formed and developed through King Tubby’s studio in Waterhouse, Jamaica.

After having earned his credentials as a member of the respected Fat Eyes crew, he branched out independently under his label, Bulby York Music. His first release, Epic And Ting showcased Bulby’s ability and skill of mixing retro sounds with a new age feel. Those who purchased this set were treated to collaborations bridging the generations between the older and younger artists; Lee “Scratch” Perry & Jesse Royal, Tenor Saw & Agent Sasco, and Beres Hammond & Bounty Killer. This proved to be a successful formula, and thus he went on to release Master Blaster and Heartcrafted, both through VPAL Music.

With the 2021 release of the Padang Padang riddim, a Steely & Clevie ‘unnamed riddim’ most celebrated with the single from Admiral Bailey called Kill Them With It, he returned to common practice in Jamaica’s popular music – relicking an existing riddim. And now, in March 2022, he breathes new life into Jah Shakey aka Far East, one of reggae’s most favorite riddims.

It’s Sizzla Kalonji who kicks off this one riddim project with Rumors, a song on the awareness of false narratives on the internet and in the news. And, like on most tracks, it’s Barry Brown’s voice you hear at the beginning. Next comes Spragga Benz with Race to Waste Your Life, his indictment of youth crime and on-going fights between private citizens and political figures in Jamaica. Then Love Like Never Before, a sweet song from Bushman dedicated to obtaining the object of his affection and the many ways he’s going to maintain that relationship, creates a totally different vibe. Anthony Redrose heeds a warning Watch What You Doing, as your negative words/actions will have a huge impact on your future activities. Focused on a higher power, Red Fox deejays We Nuh Fraid of anything that comes against him. Rising artist Jahbar I encourages us to put our everything in all we do, while Kim Pommel wants to know when will the Blood Stop? Before the instrumental version of the Far East riddim rounds up this selection, there’s female artist Shav-A with Bring Back the Niceness, a perfect song to embody the feeling of this enjoyable juggling project.