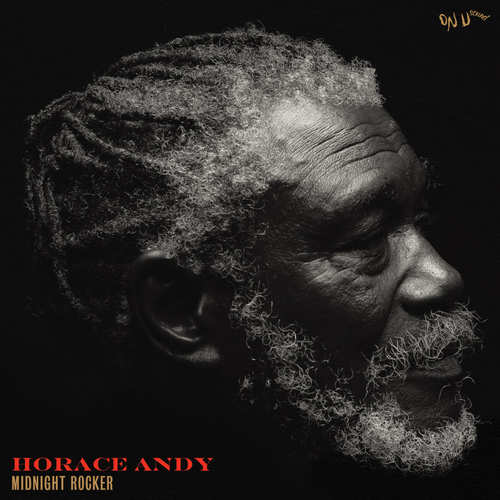 Born in 1958, Sherwood first surfaced during the mid-’70s and formed On-U Sound in 1981. While the On-U Sound crew’s original focus was on live performances, the emphasis soon switched to making records and Sherwood began mixing and matching lineups, resulting in new acts including New Age Steppers, African Head Charge, Mark Stewart & Maffia, and Doctor Pablo & the Dub Syndicate. During the early ’80s, Adrian Sherwood – co-founder of Carib Gems and Pressure Sounds, and founder of Hitrun Records as well as Green Tea Records and Soundboy Records – brought together many Jamaican artists under the collective name of Singers and Players, including Prince Far I, Mikey Dread, Bim Sherman and many others; this helped promote the individual artists at the same time as promoting the On-U Sound record label. Sherwood’s distinctive production style soon began attracting interest from acts outside of the dub community and by the early ’80s Sherwood was among the most visible producers and remixers around, working on tracks for artists as varied as Depeche Mode, Primal Scream, Einsturzende Neubaten, Simply Red, the Woodentops, and Ministry. He became increasingly involved in industrial music as the decade wore on, producing tracks for Cabaret Voltaire, Skinny Puppy, KMFDM, and Nine Inch Nails, and although On-U Sound continued to reflect Adrian Sherwood’s eclectic tastes, the label remained a top reggae outlet. Fast forward to 2019, the year Sherwood released two studio albums of longtime friend and collaborator Lee ‘Scratch’ Perry, Rainford and its radically remixed version Heavy Rain.

Known for his distinctive falsetto vocal style, Horace Hinds aka Horace Andy aka Sleepy sang on many classic productions for reggae producers like Coxsone Dodd, Phil Pratt, King Tubby, Lloyd ‘Bullwackie’ Barnes, Bunny ‘Striker’ Lee, and Prince Jammy to name a few. His career started in 1967 when he recorded his first single, the unsuccessful This Is A Black Man’s Country, for producer Phil Pratt. In the early ’70s, he started to record for Coxsone Dodd, which resulted in Studio One classics such as Skylarking, Every Tongue Shall Tell, and Mr. Bassie. The 1970s and the first half of the 1980s were his most prolific period. He found a new generation of fans in the 1990s, thanks to his work with trip hop pioneers Massive Attack. He continued to record new music for Jah Shaka, Ariwa, and Bunny Gemini, and in 1999 he came up with an album called Living In The Flood released on Massive Attack’s Melankolic record label. In 2007, he cut an impressive album called Livin’ It Up with legendary riddim twins Sly & Robbie. Whether recording in Kingston or in other places of this world, he kept his sleepy choirboy delivery and conscious roots intact, which made that he has always been a favoured vocalist among reggae fans and his eerie, haunting style has been imitated endlessly over the years.

Although having worked with countless producers in his 50+ year career and despite living in London since 1985, it’s the very first time Horace Andy has worked on an album with Adrian Sherwood. For the latter it’s the second time he has worked on late-career recordings of a Jamaican artist – Lee ‘Scratch’ Perry being the previous one. Similar to what he did with Perry on the lauded Rainford album, Sherwood has managed to get the best out of Horace Andy. The ten tracks on this album are stamped with quality all over with each and every track benefitting from superb musicianship, carefully crafted production work and Horace Andy’s still great sounding vocals. The backing band on this album features contributions from some of the best On-U Sound players including Gaudi, Skip McDonald, George Oban, Crucial Tony, the Ital Horns, and the late Style Scott.

A look at the tracklist shows devoted Horace Andy fans that the album includes a few do-overs of his classic tunes such as This Must Be Hell, Materialist, Rock To Sleep, and Mr. Bassie. The album opens with a gorgeous new version of the Tapper Zukie produced epic 1978 single This Must Be Hell on the Take Five riddim. The driving backdrop for this more darker sounding revitalised version features a crisp bassline which is simply awesome to hear. Also, the late ’70s, Winston ‘Niney’ Holness produced song Materialist about the seductive lure of money and possessions gets a great reinterpretation. Another big tune from Horace ‘Sleepy’ Andy is the sweet roots lullaby Rock To Sleep, which originally came out on the Yard label in 1976. (Some state that this tune is an early cut to Damian ‘Jr Gong’ Marley’s Welcome To Jamrock). Just like the aforementioned updated versions of classics, Rock To Sleep is also a worthy do-over that caresses the eardrums. Seeing that this album includes Horace Andy’s umpteenth version of Mr. Bassie, one wonders if it’s truly worthwhile to come up with another version. After only one listen, one simply has to conclude that Adrian Sherwood has rearranged this Horace Andy classic in such a way that it sounds really fresh and modern without losing its original strength.

Especially Massive Attack followers will recognise the title of the group’s much-loved 1991 single Safe From Harm, a track taken from the album Blue Lines. Here, Horace Andy reinterprets Shara Nelson’s lead vocal and turns his rendition into a laid-back, heavy duty piece that definitely belongs to one of the album’s highlights. Remains a batch of brand new songs, most of which are worth hearing multiple times. With Easy Money the listener is treated to a nice song that somehow brings to mind his Phil Pratt produced 1975 single Root Of All Evil. However, far better is the powerful message tune Watch Over Them in which he pleads H.I.M. to keep the youth away from the many traps and temptations that would derail them. Today Is Right Here is a tune of sheer beauty, both musically and lyrically. Backed by a lovely horn section, Horace Andy reflects on the brevity and impermanence of life in order to remind the listener that life is fragile, short, and precious. Big tune! The more you listen to Try Love, the more it grows on you, which unfortunately can’t be said about Careful. For some reason, it simply doesn’t strike a chord.

(Note: A dub version of Midnight Rocker is planned for future release.)

Conclusion As a whole, Midnight Rocker can be ranked among the best Horace Andy albums. Truly a major achievement for an artist of his age.