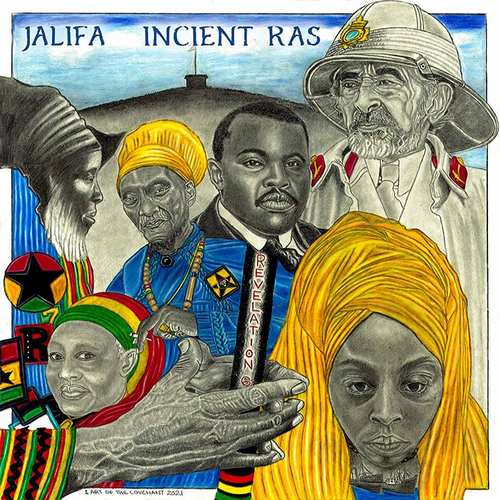 Born in Trinidad’s Port Of Spain with the given name Kalifa Nataki Alexis. Jalifa’s first musical influences came from seeing her father and two elder brothers singing. Their father, Roy Theobalds – known to many and all Rastafarian Camps as Priest Ekechi, the leader and Bobo Shanty High Priest gathering house Upper Gonzales Hill (Bobo Yard) Trinidad – would MC and DJ on the mic and mix down on the set whilst they chant and sing. Despite growing up within the Rastafarian lifestyle and strong beliefs within the faith, Jalifa listened to all styles of music, genres ranging from Reggae, Dancehall, Hip-hop, R&B from the old skool to new skool. Jalifa’s other influences came from artists like Sister Nancy. As Jalifa got older she began to take the music on a serious level and started out freestyling Hip-hop, while her elder brother Adiel Alexis also played a major part in Jalifa becoming the artist that is known today.

Her recording career started with the single Summer Getaway, done alongside Italian reggae dancehall artist High Degree. It was followed by the solo single When I Chant, Unite featuring Reddy, Born Ready, and Why Worry on the Enchanted Riddim. In 2018, Jalifa released her very first mixtape Born Ready which was curated by Ras Jammy and presented by the Suns Of Dub Record label. After having released a few other singles in the years that followed, she teamed up with producer/musician JAH David Goldfine of Zion High Productions which led to the release of Incient Ras, a four song vocal and dub showcase.

Besides Jalifa’s powerful voice and carefully crafted conscious lyrics, the digitally released 8-track EP Incient Ras features the rootical sounds of the Zion I Kings players including the keyboards and trombone of the late Andrew “Drew Keys” Stoch. Further instrumental contributions are made by Addis Pablo (melodica), Jonathan “Rankine Jedd” Rankine and Horseman (drums), JAH David Goldfine (bass), Benjamin “Ashanti Selah” Smith (keyboards), and background vocals by Sadiki “Buzzrock” Phillips. The spiritually charged Incient Ras, of which the title is derived from the saying “Old soul”, reflects Jalifa’s being, not just as a musician but, more of her cultural background and spiritual journey as a young Rasta youth within this time and space, by trodding the ancient order of Melchizedek and living a natural way of life. In true showcase style, each vocal track is directly followed by its dub version. From beginning to end, this EP treats the listener to a dubby ambiance with heavy duty bass lines rolling behind militant lyrical deliveries. As a whole, this collection brings forth a positive vibration to soothe the soul and keep the mind and heart alert.

All in all, Jalifa is a true revelation and this Incient Ras EP is definitely recommended for fans of deep roots music.