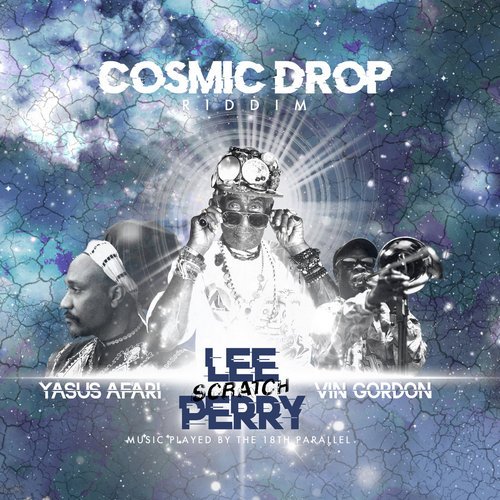 FTR042
A. Lee ”Scratch” Perry – Words From The Upsetter
B. The 18th Parallel – Spring Thunderstorm

In recent years, Fruits Records has definitely become a favourite of ours. This has happened as the Swiss label started to release some of the absolute finest reggae music on singles and albums with notable new works from veteran artists like I Kong, Oku Unuora, The Inspirators, Cornell Campbell, Linval Thompson, and The Viceroys as well as worthwhile efforts from younger artist like Micah Shemaiah, Samory I, and I-Twins. After having released the two 7″ vinyl singles from The 18th Parallel with Horns of Guiding Star Orchestra and Sylvan White in February, the always busy production team behind the label already comes up with their next remarkable release, four tracks on The 18th Parallel’s superb Cosmic Drop Riddim divided over two 7″ singles. The first single features the voice of the late Lee “Scratch” Perry, the creative genius behind the legendary sound of the Black Ark studio, one of the dub originators, and the man responsible for shaping the sound of Bob Marley and the Wailers among many other Jamaican greats. The second single features Perry’s longtime friend Vin Gordon, one of Jamaica’s finest trombonists, and dub poet Yasus Afari.

Back in 2014, the riddim now known as Cosmic Drop Riddim was laid down in Kingston JA when Fruits Records’ crew of musicians – not known yet as The 18th Parallel – was recording their first release ever, I Kong’s comeback album A Little Walk. The unused riddim stayed on a hard drive for five years until the production team found the right artist to ride it. In the summer of 2017, musicians of Fruits Records had the privilege to tour European festivals with Lee “Scratch” Perry as members of the Najavibes backing band. This is how they got to know The Upsetter, It marked the start of the production process as the first seed was sown. Lee “Scratch” Perry aka The Upsetter had that mystic vibes they were looking for. It wasn’t until 2019, that Lee Perry voiced The 18th Parallel’s Cosmic Drop Riddim. The recording was then spiced up with a few more overdubs – analog string synthesizer, cosmic guitars, subtle sounds of musique concrète. And finally, it was A-Lone Ark’s Roberto Sánchez who recreated the type of sound that the Black Ark was famous for: full of Mutron Bi-Phase, tape delay, and spring reverb hits which comes to full expression when listening to the thunderous dub version on the flipside of Lee Perry’s Words From The Upsetter, The 18th Parallel’s Spring Thunderstorm. As one can imagine the production of Lee Perry’s song has been a long and heavy process, and now, due to his passing in August 2021, the iconic reggae figure isn’t able to witness this release, which is dedicated to his loving memory.

As a pleasant surprise, the Lee Perry single is accompanied by a second 7″ single which brings two extra unexpected cuts on the Cosmic Drop Riddim. The first one is a gorgeous instrumental with Vin Gordon’s trombone meeting bass clarinet and bass flute. Together they create a deep, foggy, mystical atmosphere that would perfectly fit the soundtrack of a night journey to East Africa. On the flip side, lovers of dub poetry are treated very well as it contains a very nice poem by Yasus Afari called Healing Chant.

With the release of these two 7″ singles, Fruits Records reaffirm their status as one of the most reliable imprints when it comes to high-quality reggae music.

Words Of The Upsetter