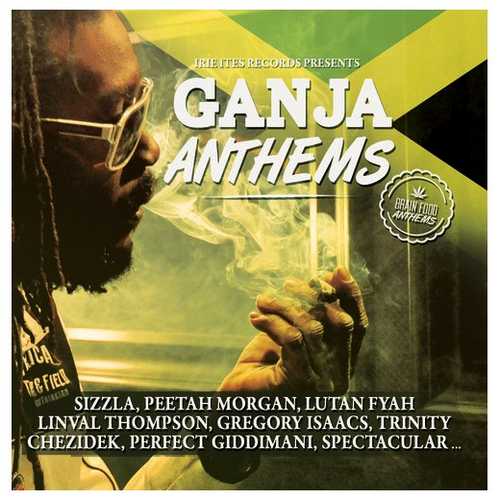 Over the decades, reggae artists have sung, chanted, and played about the virtues of the weed, its spiritual vibrations, and also tales of smuggling and police raids. Compiling a list of all marijuana songs in reggae would be an immense task, let alone to do it in chronicle order. Instrumentals like The Skatalites’ Collie Bud, recorded for Randy’s in 1964, and the Duke Reid produced Cool Smoke by Don Drummond from 1965 are examples of early references to the good herb. The rocksteady and early reggae eras saw a noticeable increase in ganja tunes with Hopeton Lewis’ irresistible rocksteady single Cool Collie being one of the earliest tunes on which a singer tackles the theme.

And then, in 1969, King Stitt recorded an early deejay anthem entitled Herbsman Shuffle for producer Clancy Eccles. However, it was in the roots reggae era of the 1970s, when Rastafari consciousness started to play a prominent role in reggae music, that the ganja tune really came into its own (think the Wailers’ Kaya and African Herbsman). Many, many marijuana songs followed including international hits like Culture’s International Herb, Peter Tosh’s Legalize It, Black Uhuru’s Sinsemilla, and in the new millennium Come Around by Collie Buddz, Marlon Asher’s Ganja Farmer, and High Grade by Turbulence & Spectacular (released by Irie Ites on 7″ single in May 2006).

A project that deals with one of the reggae artists’ favourite themes comes from Irie Ites Records outta France. As its title Ganja Anthems clearly indicates, this album collects 16 odes to the sensi from a full supporting cast of weed specialists. Besides the 13 tracks featured here that were previously released on vinyl or cd, there are also 3 brand new burners that have not been put out before. These include Sugar Roy & Conrad Crystal’s Weedman Look Out on a revisited version of a classic Studio One riddim, Peetah Morgan’s Healing Of The Nation and Spectacular’s More Herb. However, the latter isn’t a completely new tune as it was featured on the Irie Ites Meets Zenzile 10″ vinyl release from 2006. But you can call it a new one as it appears here in the remixed version of Russ D, producer of reggae & dub music since 1986. When it comes to the three new tracks it’s, in particular, Peetah Morgan’s Healing Of The Nation, which has been composed by the Roots Radics, that stands out.

No better way to start this sampler than with Turbulence & Spectacular’s High Grade, a successful collaboration tune as it reached the top positions of the reggae charts in England, Germany, and France. The two deejays deliver a wicked effort over relick of Burning Spear’s original Rocking Time riddim, played by Mafia & Fluxy and expertly mixed by Gussie P. Also Chezidek’s excellent Bun Di Ganja is underpinned by a riddim for which Mafia & Fluxy, now with help from Earl ‘Chinna’ Smith and Bongo Herman, again relicked a classic reggae riddim, this time John Holt’s Strange Things. Fans and followers of Perfect Giddimani know that when it comes to making ganja songs, he always pours much passion into the topic. And so he does in Straight To Mi Heart across the infectious Soulful Spirit riddim, a tune that is also featured on his album Reggae Farm Work.

The Strange Things riddim reappears on Sizzla’s entertaining Smoke My Herbz, but now it’s a hip-hopped out version which works well. Next comes Lutan Fyah’s Smug Alert, a stirring piece performed with passion. This tune, together with Spectacular’s original version of More Herb, was featured on 2006 released 10″ vinyl single Irie Ites Meets Zenzile. Veteran time with first Linval Thompson and then the late Gregory Isaacs in collaboration with deejay Trinity. It’s the duo’s Irie Collie that leaves the best impression. But then it’s the next collaboration, Please Mr Officer by Lorenzo & Chezidek, that kills it all. A real ganja anthem and truly a masterpiece on a great new version of Mikey Dread’s Roots & Culture riddim. This track runs for almost 8 minutes with after 4 1/2 minutes the dubbed up version kicking in, not only with that well-known massive horn riff but also with Mikey Dread’s “skib skibbydib skib” vocals. It’s hard if not impossible for the remaining tracks to match or even outmatch this superb effort and although Daddy Rings’ Ganja Pipe and Malijah’s Mi No Ina Way Dem Ina are the best of the rest, they certainly aren’t of the same high caliber.

Perfect Giddimani – Straight To My Heart

Conclusion All in all, a smokin' collection of some of the finest ganja anthems!