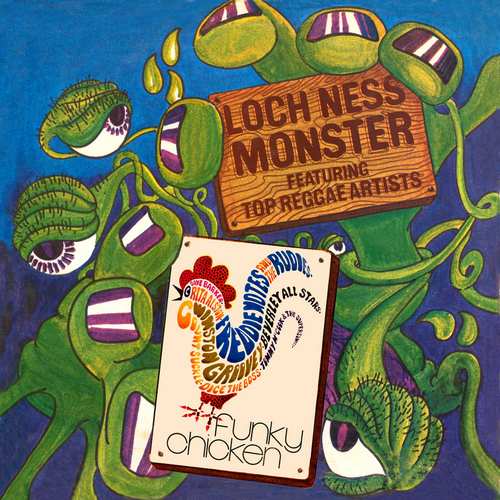 Trojan Records released these two albums in 1970 and they became best-sellers for the company. Unavailable since 1996, ‘Funky Chicken’ along with ‘Loch Ness Monster’ contains many of the wildest releases from the Boss Reggae era. Both albums, currently unavailable on any format, are now represented here, with the original track-listings and 16 bonus tracks, all echoing their respective themes. We take a look at a selection of the tracks.

1: LOCH NESS MONSTER – King Horror. The artist’s real name was Lord Davey, a Jamaican toaster on a sound produced and written by Laurel Aitken. Starting off with the screaming King Horror it moves into a mid-tempo trombone led number with the artist coming in-and-out throughout with words and further screams. Original UK release Grape. 3: BARBWIRE – Nora Dean. This will be familiar to most Jamaican music fans and has appeared on numerous albums/CDs over the years. Produced by Byron Smith it is a mid-tempo upbeat number on which Nora is helped out by another female vocalist. This comes with a heavy rhythm track and once heard is hard to forget. Original UK release Trojan. 6: VAMPIRE – The Upsetters. Starting off with a Frankenstein style vocal it then moves into a fast organ based instrumental, the organ coming from Winston Wright. It comes as a catchy number one remembers from the day it was released. Original UK release Upsetter. 9: DRACULA PRINCE OF DARKNESS – King Horror. Again we hear from Horror, this starts off with a weird intro before moving into a fast sound with spoken vocal. The rhythm track is very basic and is again organ led. Original UK release Duke. 11: PUSSY CATCH A FIRE – The Soul Mates. Weird opening before moving into a spoken intro and then a mid-tempo sound on which some of the main vocals are spoken. Chug-along rhythm track. Original UK release Pressure Beat. 15: BIRTH CONTROL – Lloydie & The Lowbites. Lloydie is actually Lloyd Charmers and this was first released through Pama Records. It comes with a spoken vocal fronting a simple organ led rhythm track. Various moans and groans as you would expect from the title. Original UK release Lowbite LP. 18: VENGEANCE – Lloyd Charmers & The Hippy Boys. Starting off with the expected strange voice, probably Lloyd himself, we get a fast-moving predominantly instrumental Boss Reggae sound. The vocal comes and goes and a female is heard helping out in a strained fashion. Original UK release Explosion. 22: PUSH IT IN – The Versatiles. A saucy very fast slice of Boss Reggae that brings memories flooding back to the reviewer. The Versatiles were Dudley Earl and Louis Davis and became prolific recording artists. Produced by Joel Gibson, we get some moans and groans on the backing track and the number gets the feet tapping. Original UK release Amalgamated. 24: WET VERSION – Dave Barker. This is what you would expect, the original “Wet Dream” (Max Romeo) rhythm track with some of the original vocal and Dave Barker coming in with a talk-over vocal. The sound is not unlike “Double Barrell” on which he performed with Ansel Collins. This is produced by Bunny Lee. Original UK release Jackpot. 26: WRECK A BUDDY – The Soul Sisters. A classic Ska tune in pure street style by an outfit consisting of Rita Marley, Nora Dean and Cecile Campbell. This mid-tempo chug-along number has Rita Marley on lead vocal and the other group members on back-up vocals. Produced by Joel Gibson and Joe Gibbs. Original UK release Amalgamated. 26: RETURN OF THE VAMPIRE – The Upsetters. The final track on this disc is produced by Lee Perry and is fast moving and nothing more than an instrumental version of an earlier reviewed track. Original UK release Upsetter.

1: FUNKY CHICKEN – Winston Groovy. This Soulful/Funky Reggae number comes as the title track to the original album. The vocal is spoken over a chug-along rhythm track and was written and produced by the well-known Reggae singer Laurel Aitken. Original UK release Jackpot. 3: THE ROOSTER – Tommy McCook & The Supersonics. This opens with spoken words and laughter before it moves into a predominantly instrumental track with some talk-overs from time-to-time. The rhythm track is organ led, probably Winston Wright and turns out to be a catchy number. Original UK release Duke. 6: THE MONSTER – Beverley’s All Stars. Another spoken intro before it becomes a fast organ dominated instrumental, it has an occasional talk-over from Prince Rough who was a sound system DJ. It was the B side to Delroy Wilson’s “Show Me The Way” and produced by Leslie Kong. Original UK release Trojan. 8: OPEN JAW – Tommy McCook & The Supersonics. Produced by Duke Reid and again with a spoken intro this mid-tempo instrumental goes round-and-round and is slightly hypnotic. The intro could be by Dave Barker of “Double Barrell” fame. Original UK release Duke. 11: POPCORN – The Upsetters. This is what could be called breakdance Reggae with a grooving beat and when on the Apollo label as a 45rpm single was credited to Billy Ball & The Upsetters. This Lee Perry produced track is another that has a hypnotic feel. Original UK release Trojan LP. 16: HONKY TONK POPCORN – Laurel Aitken as Pama Dice. Aitken had a habit of performing under different names and this is no exception. Another chug-along Reggae number on which Pama Dice comes and goes throughout. The basic rhythm track features bongo drums and goes round-and-round and was produced by Laurel Aitken. Original UK release Jackpot. 20: APOLLO 11 – The Hippy Boys. This outfit backed many various artists as a studio outfit and recorded themselves. Nice organ on this instrumental, most likely Winston Wright again. Composing credit goes to Lee Perry and was produced by Joel Gibson aka Joe Gibbs. Original UK release Amalgamated. 22: STRAIGHT TO THE HEAD – The Upsetters. Starts off with a short spoken intro and moves into a fast funky instrumental stomp. Nothing outstanding about the overall sound that goes round-and-round. Composed by group member Carlton Barrett and produced by Bruce White and Tony Cousins. Original UK release Trojan LP. 24: LOOK A PYE PYE – Lloyd Chalmers. Starting off with a weird laughing intro it is a mid-tempo predominantly instrumental Reggae-Funk sound. Some vocal touches on and off. Composed and produced by Lloyd Chalmers as a B side. Original UK release Explosion. 26: GERONIMO – The Pyramids. This outfit also performed as Symarip and were six British-based musicians. The writing credits go to Tony Cousins such as they are as the vocal is just a chant over a fastish jumpy rhythm track. Formed in the mid-60’s The Pyramids/Symarip backed many of the top British Reggae singers. 28: SHOCKS OF MIGHTY – Dave Barker & The Upsetters. On this fast-moving number Dave Barker chants over a classic Reggae rhythm and one is reminded of “Double Barrell”. Although this becomes repetitive it is a catchy. It is a Lee Perry produced number and finishes disc 2. Original UK release Upsetter.

This 2CD collection from Cherry Red Records will probably not be to every Jamaican music lover’s taste, but one cannot deny that it was an interesting part of the Jamaican music scene. Covering two of Trojan Records best sellers it would be a valuable inclusion into any Jamaican music collection and with 56 tracks at £11 99p and the usual 8 page booklet it gives the listener an insight into a different area of Jamaican music.

The Versatiles – Push It In

Upsetters – Straight To The Head

Conclusion This 2CD collection will probably not be to every Jamaican music lover's taste, but one cannot deny that it was an interesting part of the Jamaican music scene.