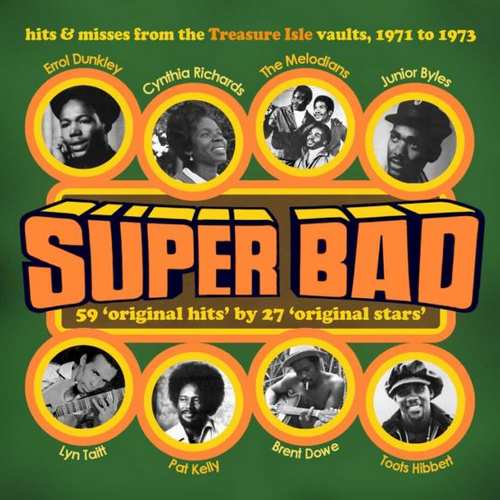 Here we have another 2CD collection that includes a large number of Jamaican hits out of the early 1970s. Produced by Duke Reid at his Treasure Isle Studio ‘The Duke’ had become one of Jamaica’s music industry leaders, having released some of the biggest selling Ska, Rock Steady and Reggae 45s on the island. This contains hits by established artists, The Heptones, The Tennors, Errol Dunkley and Pat Kelly along with numerous long-lost gems by The Willows, The Saints, and Laselles Perkins. Containing 50 tracks, 33 of which are new to CD make up this well- structured collection that will be a must for Duke Reid collectors and early top quality Reggae sounds. We take a look at a selection of these.

Track 1: SUPER BAD – Jeff Dixon. This is naturally the title track to the collection and comes as a classic talk-over number with the rhythm track from ‘I’ll Be Lonely’ by John Holt & Joya Landis. This can be found on the ‘Trojan Rarities Box Set’ from the mid-2000s and is a fun sound. Track 3: PIRATE – The Ethiopians. This number has Calypso tones at the start before moving into a fast straight Reggae track. This comes with the usual vocals expected from one of the Kings of Jamaican music. Track 5: SENTIMENTAL REASONS – Cynthia Richards.. One of Jamaica’s underrated female artists Cynthia is here on a much recorded song and her clear-cut vocal does it justice. The rhythm track comes mid-tempo and is another straight Reggae sound. Track 7: BROKEN HEARTED MELODY -Delroy Denton. On this Delroy is backed by The Silvertones and the track has nothing to do with the song of the same name recorded in a pop vein by Sarah Vaughan. This is a chug-along, mid-tempo straight Reggae sound. Track 9: JANGO – Eddie Ford. Starting off with a spoken intro given by two vocalists it moves into a mid-tempo number. The two vocals are heard at various times throughout. Eddie gives a polished semi-sung vocal and the overall sound is toe-tapping material. Track 11: YOU’RE THE ONE I LOVE – Dorothy Russell. This is a fabulous very early Rock Steady/Reggae killer sound. Coming with a classic Soul vocal it has a chug-along mid-tempo rhythm. Unfortunately Miss Russell never became a Reggae star as she should have done. Track 13: WEATHER REPORT – The Tennors. Formed in Kingston in the mid-1960s they started life as The Tennor Twins. They became a trio with the addition of Ronnie Davis in 1968. This slower number comes with a polished lead vocal and the vocalist is helped out by a backing chorus at times throughout. This is a cool slice of Rock Steady. Track 16: IF I SHOULD MAKE IT – Freddie McKay. This is mid-tempo and comes with the clear vocal one expects from an artist who over the years became a prolific part of the Jamaican music scene. Nothing complicated about the rhythm track, just Reggae of a high standard. Track 18: RUB IT DOWN – The Eagles. Obviously nothing to do with the pop outfit of the same name we have a track that was originally released on The Techniques label. This has tones of the Maytals ‘Monkey Man’ and there is nothing complicated about the rhythm track, on which we hear some nice trombone playing. Track 20: JUNGLE FEVER – Cynthia Richards. This is a strange number that comes with a spoken vocal that comes in-and-out throughout. The rhythm track is nothing special and it is a number that does not show off Cynthia’s vocal talents. As mentioned before this artist should have had more success than she ended up having. Track 23: MIGHTY REDEMER PART 1 – Justin Hinds & The Dominoes. This mid-tempo slice of cool Reggae comes via one of Jamaica’s top outfits. The vocal is combined and the writing credits go to Mr Hinds. This was released on various coloured Duke Reid labels, pink/white and green/white in 1972. Track 25: BUCK AND THE PREACHER – Tommy McCook. This track finishes disc 1 and is composed by Duke Reid and was released on the Pyramid label. This starts with a spoken intro and we hear a vocal from time-to-time throughout. A you would expect from Tommy it is predominantly instrumental with classic percussion. Has appeared on various other collections.

Track 1: BREAK UP TO MAKE UP – Leroy & Junior. Originally a hit for The Stylistics in 1973 this mid-tempo version stands up well against the original. Leroy is Leroy Sibbles (The Heptones) and Junior is Junior Byles (The Versatiles). This is a fine way to start this disc and can also be foundon Trojan’s ‘Soulful Reggae Box Set’. It originally was released as a 45rpm on the Treasure Isle label. Track 3: WATCH A WHISPERER – The Willows. Not much known about this outfit other than to say they are very accomplished. This comes as mellow Reggae with a cool rhythm track and combined group vocals. Some percussion on the backing track and a catchy number. Track 5: HE’S AN OLDER MAN – Albert Tulloch. Again another artist who one knows little if nothing about. Track 8: PASSION LOVE – The Melodians. This time around we have an outfit that should be known to most Jamaican music fans. Mid-tempo number with the usual combined vocals from The Melodians. The rhythm comes with some percussion and we end up listening to a slice of classic Reggae. Track 11: ADAM 12 – Lyn Taitt & The Tommy McCook All Stars. Not sure why we have this title but the track is a good one. The rhythm track is based on ‘Samba Pa Ti’ by Santana and we end up with a slick instrumental from one of Jamaica’s finest instrumentalists in Lyn Taitt and helped out by another of the island’s top outfits. Track 14: LOVE MAKES THE WORLD GO ROUND – The Melodians. Released in 1973, this mid-tempo number has all the class we expect from The Melodians. This was released as the B side to ‘Passion Love’ on the Randy’s label in the UK. Written by group member Brent Dowe and easy on the ear. Track 17: MEMORIES DON’T LEAVE LIKE PEOPLE DO – Bunny Brown. A song recorded by various artists in a pop/soul vein, namely Johnny Bristol and Tom Jones, this version is slowish and comes as laid-back Reggae. Bunny gives a soulful vocal at high-pitch and this is a worthy version. Track 19: NOBODY – Pat Kelly. On this Mr Kelly is backed by the Treasure Isle All Stars and it starts off with some fine organ. Pat is helped out by a vocal chorus on this Bob Dylan song. This version could be said to be the better of the two. This was released by Pama Records on a vinyl album after the original 45rpm single on the Duke Reid label. Track 24: FEEL THE SPIRIT – Toots Hibbert. This comes as a mid-tempo sound that is credited to Toots Hibbert as a solo performer, not sure why it is not credited to The Maytals. Usual classic sound with clear main vocal. Toots is helped out by backing vocals, maybe the other group members. Nice chug-along rhythm track and an overall good track. Track 25 FEEL THE SPIRIT VERSION – Toots Hibbert. Not only does this track finish off the collection, but it’s also a version of the previous track.

Looking at this 2CD collection released by Cherry Red Records we have a varied selection of tracks, different styles of Jamaican music. In total it contains 50 recordings and is another well put together selection of tracks and as usual it comes with an 8 page informative booklet. At £11.99p this collection should not be missed.

Conclusion Another well put together selection of tracks from Doctor Bird/Cherry Red that should not be missed.