Yabby You & The Prophets – The Yabby You Sound (Dubs & Versions) 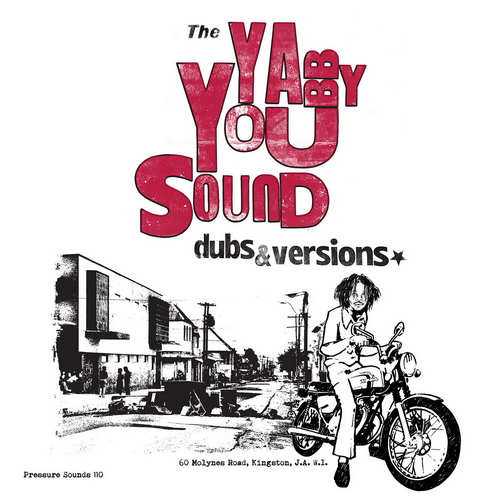 A notable amount of music recorded and produced by the late Vivian Jackson aka Yabby You can be found in Pressure Sounds’ extensive catalogue. Its list of albums includes titles such as Deeper Roots (Dub Plates And Rarities 1976-1978), Deeper Roots Part 2, Beware Dub, Walls Of Jerusalem, Prophecies Of Dub, and Conquering Lion. The latest addition is The Yabby You Sound (Dubs & Versions), an album that presents some of the best Dubs and Versions that Yabby You produced between 1975 and 1982.

The sales of Yabby You’s first two singles, Conquering Lion and Love Thy Neighbour, provided him with enough money to launch his Prophets label in 1974. The riddim for Conquering Lion was recorded by engineer Karl Pitterson at Dynamic Sounds and then voiced and mixed by King Tubby at his studio, which was located close to Yabby You’s home in the Waterhouse district. Since then Yabby You and King Tubby cultivated a special relationship and nearly all if his subsequent releases were voiced and mixed at Tubby’s. In retrospect, it’s obvious Yabby You benefitted from Tubby’s extraordinary mixing skills – and that of the dub originator’s apprentices Prince Jammy, Philip smart, and Scientist. The result of this collaborative relationship with King Tubby are the many incredible dub versions that appeared on the B-side of singles and on albums such as the landmark LP Prophesy Of Dub and Beware Dub.

The album opens in great style with two relicked versions of Studio One riddims; Roland Alphonso and The Soul Vendors’ Death In The Arena and Sound Dimension’s Rockfort Rock. Tribal War Dub – from the LP Vocal & Dub – was recorded at Lee Perry’s Black Ark but mixed and overlaid with syndrum sound effects at King Tubby’s. Creation Rock Version, a killer dub with a pounding bass, was featured at the flip side of Michael Prophet’s 1980 single Creation Rock. Ex-Skatalite and prime session musician Tommy McCook recorded some great instrumentals for Yabby You including the mighty Death Trap and was a key collaborator with the producer/singer throughout the ’70s. Also, United Africa Dub is a real scorcher with Tommy McCook’s flute leading an instrumental dub of Yabby You’s 1982 track Jah Over I, which incorporates a solid steppers drum pattern from Sly Dunbar, with syncopated snare fills. In all, these three tracks form a great opening part, to say the least.

Yabby You also launched the careers of notable vocalists like Michael Prophet, Tony Tuff, and Trinity. Also, Wayne Wade was one of the discoveries and this set includes four dubs all taken from singles of the teenage singer. First, there’s the excellent dub version of Wayne Wade’s stirring reworking of Yabby You’s signature tune called Lord Of Lords. It’s followed by the sublime Black Is Our Colour Dub with the singer’s sweet vocal floating in and out of the mix. Now I Know Dub is the dubbed out version of Wayne Wade’s 1978 single Now I Know, a recut of Dennis Brown’s Baby Don’t Do It. And then there’s Man Of The Living Dub, of which the vocal is one of the deepest roots tunes that has been recorded by the artist.

Dub U So and Yabby U Sound are taken from the 1982 LP named Yabby U Meets Sly and Robbie Along With Tommy McCook. Both tracks actually revisit some of Yabby You’s older riddims and are new dub mixes by Professor and Scientist with Yabby U Sound being a minimalist remix of the anthemic King Pharaoh’s Plague. As was the trend of the time, Yabby You also issued noteworthy deejay versions of his most enduring riddims. Vengeance In Dub, the powerful Repatriation Rock, and Warrior No Tarry Yah Version are three version sides to deejay records. The first one is the dub of Ranking Trevor’s toast over a recut of Jah Vengeance, followed by Jah Stitch’s deejay cut to Zion Gate aka Judgement On The Land named Repatriation Rock, and singer Tony Tuff deejaying over his own tune One Big Family, riding the classic Paragons’ Man Next Door riddim. All were mixed at King Tubby’s, probably by Prince Jammy.

From the original Yabby You & Michael Prophet 1979 LP Vocal & Dub comes Heads A Roll Dub, which is a dub of Yabby & the Prophets’ Blood A Go Run Down King Street, a standout track on the vocal set Deliver Me From My Enemies. Both Mash Down Rome Dub and Turn Me Loose Dub, dubs to Michael Prophet’s vocal cuts Mash Down Rome and Turn Me Loose, are also taken from that LP. Death To All Racist and Aggression Dub are both taken from Michael Prophet LPs, Yabby You Meets Michael Prophet And Scientist At The Dub Station and Stars In Disco Showcase respectively. Death To All Racist is the dub to Michael Prophet’s Stop Throw Stones, while Aggression Dub may actually be named Falkland Crisis Dub. Babylon A Fall Dub comes from the Babylon A Fall Discomix 12” on the Grove label. Don’t overlook Time Changing Dub and Chanting Version either. These are the version sides to singles by lesser-known talented singers Samuel Patterson (Time Changing) and Errol Alphonso (Chant Jah Victory).

The two bonus tracks featured on the CD are earlier cuts of the riddim used for Yabby U Sound. Without a doubt, this is one of Yabby You’s most essential and heaviest riddims. Tommy McCook’s Plague Of Horn is a great driving sax cut, which is followed by a thumping dub mix from King Tubby. Both tracks are well known and most likely can be found in any reggae fan’s collection, whether it’s on vinyl or CD.

Conclusion In all, a worthwhile release that in particular will delight reggae fans who aren't too familiar with Yabby You's musical output.