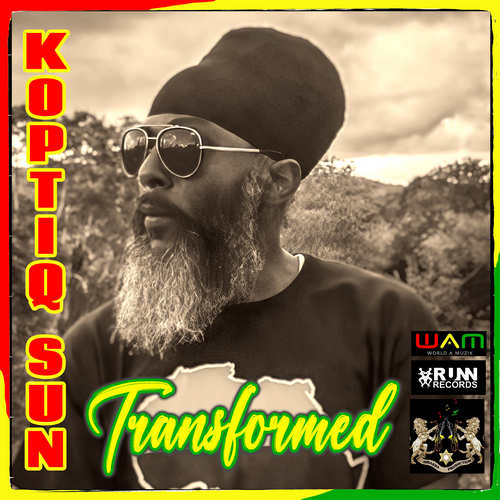 In the mid to late 1990s, Dutch record label RUNNetherlands, later renamed RUNN Records, in collaboration with Barry O’Hare’s X-Rated label attracted international attention with the release of acclaimed ‘continuous mix’ albums, which we now would call mixtapes, like The Heathen and Drum Song and full length studio albums from at the time talented up-and-coming Jamaican artists such as Tanya Stephens, Professor Frisky, Mikey Spice, Prezident Brown, and Daweh Congo. Especially the latter’s album entitled Militancy was hailed as a modern roots classic by connoisseurs and reggae fans alike.

And now, more than two decades after the label had built itself a good reputation amongst reggae fans, RUNN Records is back with a remarkable brand new artist album that is stamped with quality all over. This time it’s a full length album by Koptiq Sun – not a new talent, but a multi-talented Jamaican singer, songwriter, arranger, music engineer, and producer artist from Kingston who was previously recording and performing under the stage name Jeffrey Star or Geoffrey Star.

Music has been the central theme in the life of Geoffrey ‘Star’ Forrest, the son of guitarist and bassist Bertram Ranchie’ McLean who played in bands like Ja-Man Allstars, Skin, Flesh & Bones, and The Revolutionaries. A formal introduction to singer, songwriter, musician, and producer Michael Johnson aka Mikey Spice gave him the opportunity to record songs like I Don’t Know, Soulless Soldier, Jah Jah Love, and I’ve Got Heaven on the Ingredience label using the alias Rich Kid. These songs showcased his melodious sound and attest to his writing ability, while his versatility, also under the alias Rich Kid, was exemplified by his combination with Shabba Ranks in Man Pon Consignment Remix (1996) and Jahmel in Masterbuilder (1998). He was chosen as a finalist in both the Jamaica Cultural Development Commission’s annual Festival song competition (JCDC) in 1998, and the Caribbean Music Expo (CME) 2002. After the CME, he toured Europe with The Mighty Diamonds, Wayne Wonder, Fred Locks, and Lady Saw. It was while on tour, that he met Aswad’s Brinsley Forde who became impressed with his vocal talent. As a result, he worked with Aswad and together they collaborated on a single entitled Are You Thinking What I’m Thinking.

Counting Bob Marley, Burning Spear, Dennis Brown, Beres Hammond, and Michael Jackson among his primary influences, along with a slew of R&B artists like Al Green, Marvin Gaye, The O’Jays, John Legend, and Ne-Yo, he has combined his creativity and inspirations into a sound all his own. This could be heard on his cuts for Don Corleon’s successful mid 2000s Drop Leaf and Seasons riddims like I’m Sorry and Picture Me And You. Fast forward to 2015, when he released his 14-track debut album entitled Unscripted on his own Jusdaha Productions imprint under his alias Geoffrey Star. That album featured the single I Don’t Understand, which was produced by Grammy Nominated producer/engineer Barry O’Hare. And then, the journey of a follow up album began in July 2017.

In Koptiq Sun’s own words: “I was going through a major spiritual transformation from my previous life and artist career as Geoffrey Star, feeding on electric foods and in pursuit of getting in touch with my higher self. Melodies and words of wisdom bombarded my consciousness demanding actions from my artistic core. There was no escaping! Barry and I had a meeting discussing the kick off of the album and the rest is history…”.

All vocals for the new album were recorded by Geoffrey ‘Koptiq Sun’ Forrest at Tiny Cube Studio in the serene hills of Golden Grove, St Ann JA, and mastered by one of Jamaica’s finest, Christopher Daley. Producers include Barry O’Hare (World A Muzik), Guido Delvoux (RUNN Records), ‘Beezy’ Coleman, Sam Gilly (House of Riddim), and Geoffrey ‘Koptiq Sun’ Forrest (Judasha Productions). Barry O’Hare unfortunately passed away before the project was completed and thus the Transformed album is released in his honor.

After the opener Intro, of which the nature sound behind the spoken words is taken from free material on Zapsplat.com, it’s Brother’s Keeper that sets the tone for the rest of the tracks which are all of significant quality. The rocking and grooving tune gets things started in a big way and is truly candy for the ears, especially due to Koptiq Sun’s vocal delivery and the vibrant riddim with its gorgeous sounding horns. It’s followed by the matching Decimate, a powerful message tune that fires on all cylinders. With the next huge tune – All Seeing Eye – leaping off the speakers you don’t even get time to sit down and relax as this track also keeps you involved from beginning to end. Next drops Spit Truths on a riddim with a very familiar sounding bassline. This solid piece has very nice vibes and is more laidback than the preceeding tracks. The middle part of the album is formed by the crucial Kong-Kara, a true roots killer that simply has to go on replay, the wonderful ‘Beezy’ Coleman produced Universal Child, the somewhat jazzy Philosophical Obsessions, and a truly dazzling and respectful remake of Bunny Wailer’s Armageddon. Next comes the head nodding After Life, a delightful song that grows on you the more you listen to it. Don’t know why, but somehow the funky groovin’ Life Is Good reminds of the Commodores’ Nightshift. A nice tune to hear before the album is rounded off with Playing With Fire and the massive bonus track Better Place on the Main Dish riddim, a relicked version of Black Uhuru’s Guess Who’s Coming To Dinner.

This is a great – comeback – release from RUNN Records. So, if you enjoy reggae music, there’s enough on this album that you’re going to fulljoy. Ignore at your peril!!

Conclusion If you enjoy reggae music, there's enough on this album that you're going to fulljoy.