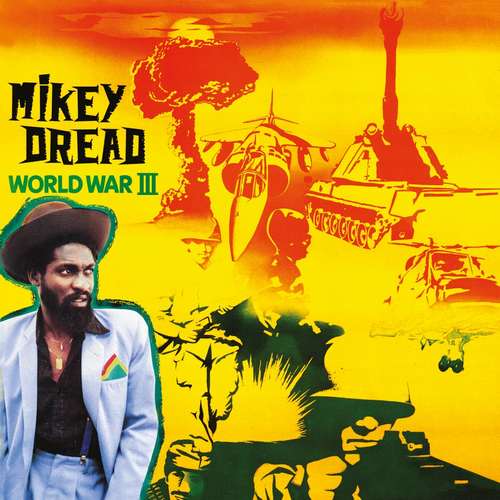 Michael Campbell was an exceptional and consistently fascinating figure in reggae music, by many of his fans probably better known as Mikey Dread. This Port Antonio born rastaman delivered his earliest contribution to the reggae business towards the end of the seventies when he started to host his popular four-hour radio show Dread At The Controls on JBC, Jamaican Broadcasting Corporation. It was the first reggae radio show on the Island and the rootsiest Jamaica had ever heard! Mikey became a massive hero in Jamaica and his success enabled him to record some good tunes for Lee Perry and Sonia Pottinger.

After the JBC bosses and the island’s establishment figures had forced him to resign from his program in 1979 he turned his full attention to recording and launched his own D.A.T.C. label. The album African Anthem Dubwise was his debut album. With fresh-sounding production work, Mikey Dread became part of a group of young and talented producers who made their mark in the late seventies. He produced himself as a deejay, as well as hard roots singers like Rod Taylor, Edi Fitzroy, Earl 16, and Junior Murvin, to name a few. The dub sides and version sides made people buy the records also for their dubs, and that hadn’t happened since King Tubby’s heydays with Bunny Lee a couple of years previously. His most prolific and successful period was from the late 1970s to the mid-1980s, releasing some 10 albums and several singles. He also toured with The Clash and even produced some of their songs. In the 1990s he toured all over the world, provided vocals with the reggae collective Singers And Players on Adrian Sherwood’s On-U Sound record label, produced dub tracks for UB40, and was involved in many other projects. Late in 2007, he said he was being treated for a brain tumor, several months later -15 March 2008- he passed away.

Most of the songs on the album are inna extended mixes, with the vocal part followed by Mikey’s inimitable dub versions, mixed by Mikey himself and Scientist. Mikey’s somewhat nasal vocal delivery contrasts well with the rough riddims and sparse vocals of Edi Fitzroy, Watty Burnettt and Earl Sixteen. “King Tubby a de dub plate master..Prince Jammy a de mix it master..Scientist him a apprentice master….A dis one here a the studio master..a dis one here is e worldwide master!”. Iconic phrases from this dub extravaganza called The Jumping Master. Here we hear Mikey inna singjay stylee, with a few vocal lines from Edi Fitzroy. Driven irresistibly by Flabba Holt’s bass lines, multiple versions of this song can be found on the Master Showcase album. Next comes Mikey’s superb, dubbed up, interpretation of Slim Smith’s Rougher Yet riddim, called Break Down The Walls. Killer tune!

The third track, Jah Jah Love (In The Morning was mixed in London by Bill Price. It’s loosely based on Ken Boothe’s Moving Away riddim. Side 1 closes with Israel (12 Tribe) Stylee (Extended Play) a relentless dub exercise, thundering from the speakers for nearly nine minutes. Earl Sixteen’s irresistible voice can be heard sparsely on Money Dread, served on an unbreakable Roots Radics backdrop. Then comes Mental Slavery using the well-known Drifter riddim, followed by Skin Head Skank, a thoughtful drum and bass attack. After the slowly dragging and echoing Losers Weepers, Finder Keepers, with the deep bass voice of Watty Burnett, it’s time to say goodbye in an appropriate way. He does this with the mind-blowing tune World War III, contemplating racial issues, the discrimination against rastas, and ultimately calling for mutual understanding. Nuff Said!

Conclusion Great reissue set with Mikey Dread at his best!