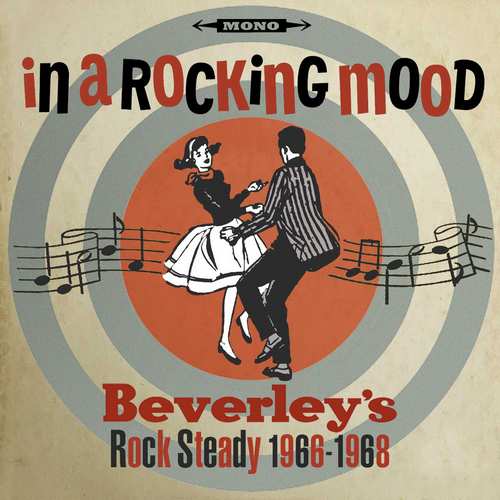 DISC ONE: KEEP THE PRESSURE ON – VOCAL GEMS

This collection is the first release of Beverley’s Records Rock Steady recordings. Produced by Leslie Kong it features some of the finest recordings released in Jamaica when Beverley’s was launched at the start of the 1960s until its closure in 1972 after Producer Leslie Kong died in 1970. Artists such as Desmond Dekker, Jimmy Cliff, The Maytals. and Bob Marley/Wailers are included on the 2CD, 47 Track collection. 10 of the recordings are new to CD and it is now time to look at a selection from both discs.

DISC ONE: KEEP THE PRESSURE ON – VOCAL GEMS

1: KEEP THE PRESSURE ON – Winston & George. This classic starts off with a trombone lead into and then moves into a fast Rock Steady number. The duo combines to give a cool vocal and more trombone is heard mid-way through. This track was included in the ‘Rock Steady Rarities Box Set’. 3: RUDIE GETS PLENTY – The Spanishtonians. This five-member outfit was also known as The Spanish Town Skabeats and on this fast-moving slice of Rock Steady we have combined group vocals. Nice laid-back saxophone mid-way through. The track was included in the ‘Trojan Rude Boy Box Set’. 5: MOSES – The Rio Grandes. This sound is fastish and has a catchy rhythm track, The vocals are from all group members and this was the B side to ‘Soldiers Take Over’ a track heard later on this disc. Released on Pyramid in 1966. 8: SOMEBODY PLEASE HELP ME – Norman Grant. This artist co-founded The Twinkle Brothers in 1962 with brother Ralston. On this Ska number Norman gives a fine vocal with a soulful tone. The rhythm track comes uncomplicated and features some fine guitar work, this was Norman Grant’s first Ska recording. 10: I’M IN A ROCKING MOOD – Austin Faithfull. This is the overall title track to this collection and is a full-on Rock Steady number from 1967. The vocal is full-on and lends itself well to the rhythm track. Some nice trumpet playing to be heard mid-way through. Austin also fronted a group called The Hippies. 12: FESTIVAL TIME – Eric Morris. The vocalist is also known as Eric “Monty” Morris and worked with the original Skatalites. This starts with a Calypso feel and a vocal from a young sounding Mr Morris. This is a mid-tempo sound and with a pleasant laid-back recording overall. 14: YOU TREATING ME BAD – George Dekker. This track comes from one of The Pioneers’ original members and on this the sound is not unlike the mentioned outfit. This mid-tempo sound has multi-vocals with George out front and is classic Rock Steady. Some nice percussion on the rhythm track and this track can also be found on ‘Rock Steady Rarities Box Set’ from Trojan Records. 17: HOLD HIM JOE – Glen Adams. This artist was a Jamaican musician, Composer, Arranger, studio engineer and co-founder of The Heptones. Also a member of The Pioneers and on this mid-tempo number Glen’s vocal is cool and backing singers are present. True Rock Steady rhythm, gets the feet tapping. 18: AIN’T THAT PECULIAR – Austin Faithfull. On this mid-tempo Reggae sound, Austin is joined on backing by The Hippies and the vocals are main and backing. Some fine piano on the intro and Austin gives a soulful vocal. An overall catchy and cool number from 1968. 21: SOLDIERS TAKE OVER (alt.tk)- The Rio Grandes. Nice military sounding intro before moving into a mid-tempo rhythm with combined group vocals. Excellent saxophone playing mid-way through and overall a pleasing sound. Released by Trojan Records in the UK during 1966. 24: FINE FINE FINE (alt.tk) – Freddie McKay. This soulful singer never saw the success he so rightly deserved and on this he sings a Soul style song over a Rock Steady rhythm. It comes with an uncredited female backing chorus and was released on the Pyramid label in 1967. 25: I’M IN A ROCKING MOOD (alt.tk) – Austin Faithfull. To finish off this disc we have an alternate take of the compilation’s title which comes as nothing more than a version of this number earlier on this disc.

1: WOMEN OF THE WORLD. Superb, gritty early ’60s pre-Ska tune from Alphonso. It is an adapted tune from the musical ‘Brigadoon’. If you are looking for a classic way to start disc two then this is it. 4: EL TORO. Released on the pink and black Beverley’s label. A lilting rhythm track and fine saxophone playing along with a bass guitar riff throughout. UK release 1967. 7: THE CAT. Great Jazzy Ska number that moves and grooves and the ‘El Pussy Cat’ tune is used at times. For the record, the b side was ‘Rudie Got Soul’ by Desmond Dekker. 10: SOUL FINGER. This is a version of the tune originally released by The Bar-Kays. This does the original great justice with funky sax playing and a catchy guitar riff. It is a track that is hard to get out of one’s head. If you like your Rock Steady to have a soulful feel then this certainly fits the bill. 12: SOCK IT TO ME. This is a slower number, being Rock Steady. Cool rhythm track and a toe-tapping sound that can also be found on ‘Trojan’s Rarities Box Set’. Released on 45rpm in 1967. 15: CHARADE. This has been covered numerous times in various styles over the years. This Rock Steady rendition is pure class with A1’s sax playing as one would expect. Released in 1967. 17: GOOD NIGHT MY LOVE. Slow start before moving into a mid-tempo Ska number, the tune having been given a vocal by numerous pop artists over the years. On this Roland is backed by The Beverley All Stars once again. This was the B side to Derrick Morgan’s ‘Want More’ and this is a real killer track and can also be found on Trojan’s ‘Reggae Rarities’. 18: WHITER SHADE OF PALE. Originally recorded by Procul Harum and taken to the top of the UK charts, this lilting Rock Steady version does the original justice. The saxophone playing glides over the rhythm track and overall this is a classic slice of Jamaican music. On the rhythm track we have Lyn Taitt & The Jets. 22: SOUL FINGER. Heard earlier on this disc this is a version and nothing more. It comes as the final track on this disc and the complete collection. This version has not appeared on CD before.

To sum up, this 2CD collection one has to give high praise to Cherry Red Records for putting together another high-quality collection that features a numerous quantity of classic tracks. Many of the tracks will probably be new to many Jamaican music lovers and this gives the listener the chance to hear groups and singers they have not previously come across on disc one and get them into their music collection. For fans of Roland Alphonso disc two will be a gem with a selection of quality tracks from a legendary artist. The collection comes with 47 tracks and the usual 8 page booklet full of information and pictures and at £11 99p it will enhance any Jamaican music collection.

Norman Grant – Somebody Please Help Me

Roland Alphonso – Song For My Father

Conclusion A high-quality collection that features a numerous quantity of classic tracks.