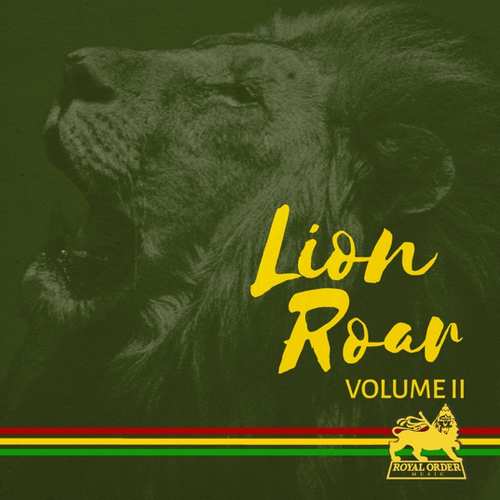 Lion Roar, Vol. II is the second edition consisting of songs culled from the catalogue of Royal Order Music, a reggae label founded by California-based DJ/producers King I-Vier & Jan Yzer. The label has become a force to be reckoned with, releasing a number of hit tracks over the years. Some of the genre’s most recognizable names in reggae business have recorded for Royal Order Music including Chronixx, Protoje, Sizzla, Gappy Ranks, and Pressure Busspipe to name a few.

This new compilation album kicks off with Sizzla’s relevant Political Lies, which is delivered in fine style on 2017s What To Do Riddim. Mortimer’s Ganja Train was previously released on 7″ vinyl with This Feeling on the flip. The 2016 issued herbalist anthem comes over a riddim produced in collaboration with Loud City Music. The uptempo reggae riddim has a thumping bassline, wailing guitar, and mystic percussion and is the perfect vehicle for Mortimer’s vocal delivery. Randy Valentine is represented with two tracks taken from his 2017 EP New Narrative. The UK-based multi-talented versatile singer/songwriter/producer with Jamaican roots goes into lovers’ territory with the respectful Me & My Lioness, which is a solid effort. Next drops the gorgeous Real Like That, which describes the everyday struggles of many people in this world. It is the sax play of Daniel Halligan and backing vocalists Sherieta Lewis and Nikki Burt that add something extra to this tune.

Pressure Busspipe seemingly effortless rides Roots & Harmony Band’s sterling Cultivator Riddim from 2014. With Good Ganja Herb the wicked chanter from out of the Virgin Islands adds another worthwhile herbalist anthem to this collection of tunes. On the same riddim comes Smoke Alarm by Perfect Giddimani, another one in the artist’s long line of smashing herb tunes. However, here he fails to make a strong impression. Would have been better if another cut for the riddim had been included like for example Wayne Marshall’s excellent The Boom Draw or Sizzla’s Sweet To My Brain. A big and mighty offering is the Gappy Ranks & Torch collab Barefoot over the wonderful Smart Riddim. What a song!! This is the kind of tune that can be heard multiple times without getting bored.

Bob Hustle’s solid piece Life Is What You Make It is the first track over the heavy War Is In The Dance Riddim, probably best known as the riddim behind Gappy Ranks’ track Carpenter from his Shining Hope album, that completely dominates the last segment of this compilation. Four cuts on that wicked 2014 relicked version of Frankie Paul’s Worries In The Dance plus famed DJ Vadim’s remixed version of Gappy Ranks’ Carpenter. The underrated Rob Symeonn aka the Spark Igniter sharpened his skills as a singer and entertainer by working with New York-based sound systems after which he released his debut single Anything For Jah in July 1997. All She Wants showcases the singer’s distinct and inimitable vocal style to the fullest and, together with Addis Pablo’s delicious instrumental Melodica In The Dance, is the best of the four regular cuts for this excellent riddim. Somewhat disappointing is DJ Vadim’s remixed version of Carpenter, which doesn’t match, let alone outmatch, the original at all.

Addis Pablo – Melodica In The Dance

Conclusion In all, "Lion Roar Vol. II" is a strong compilation and a good introduction for those who aren't familiar with Royal Order Music releases.