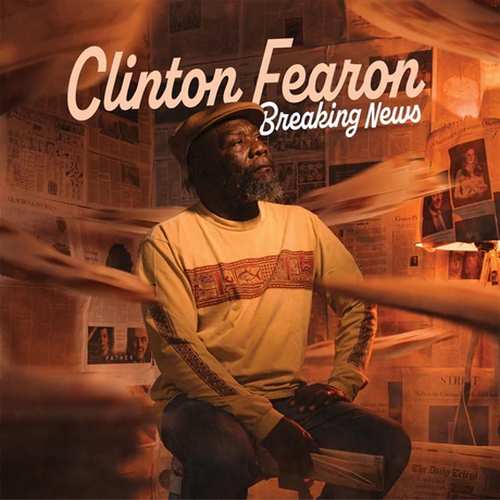 Reggae veteran. and much revered former member of The Gladiators, Clinton Fearon is back with the follow-up of his 2019 album History Say. The tracks for the new album were written in a few months during the COVID-19 pandemic. At home in Seattle WA, he was living the crisis with his wife Catherine, broadcasting together live series to keep in touch with the outside world. Moments that turned out be bright lights throughout the crisis and helped Clinton’s inspiration stay positive. On the other hand, the constant bad news from the media also touched the songwriter, who felt the need to fight back with lyrics full of common sense and compassion.

The process of making his thirteenth solo album entitled Breaking News was an unusual one for Clinton Fearon. Before the COVID-19 pandemic, he was used to recording a sample track (vocals/guitar) for each song in the studio before he started recording track by track with his Seattle musicians, but this time he had to proceed differently. Clinton Fearon first recorded a real demo and quasi took care of all instruments (except drums and keyboards) with his engineer Pete Remine at Dubtrain Studio in his neighborhood. The demo was then transmitted to musicians in France so that they could immerse themselves in it. A few months later, Clinton Fearon flew from Seattle to Bordeaux and began recording with The Riddim Source alongside Damien “Bobby” Coutrot, sound engineer of the Baco Studio. The musicians of The Riddim Source are no newcomers as they’ve been making reggae music in France for many years. The players of instruments are Xavier ‘Kubix’ Bègue (guitar), Julien ‘Manjul’ Souletie (vocal and percussion), Simon ‘Saymon’ Coutant (drums), Thomas ‘Mato’ Cirade (bass), and Muctaru Wurie (keyboards). Produced by Boogie Brown Productions (Clinton and his wife Catherine), Breaking News is made up of ten vocal cuts and one dub track, which actually is a dubbed out instrumental.

It’s the strong title track Breaking News that gets things up and going, Musically and lyrically this is Roots Reggae music at its very best and thus without any doubt one of the album’s highlights. Environmental consciousness is one of the topics that is close to Clinton Fearon’s heart as once again comes to the fore in Don’t Dump It, an appealing warning song in which he asks not to dump all kinds of garbage in the water. Reggae music not only entertains but also educates! The COVID-19 pandemic caused Social Unrest in countries all over the world and this is not surprising that Clinton Fearon wrote a song about it. Previously released as a single, the solid social commentary now reappears in this collection of tunes. The opening lot comes to an end with New Chapter, actually the longest tune to be found on the album and one that probably needs to grow on you.

To cheer up difficult times you need to have songs like the unpretentious Have Some Fun and the lovely sounding Sweet Morning Sun, and that’s exactly what these tracks do in the middle part of this album. Next comes Brace Yourself which with its inspirational vibes and along with I Wanna Dance sets a nice stage for the songs that follow. As Breaking News winds down, the listener is treated to two very strong pieces; Trod On and I Am Thankful. The former is probably the stronger of the two, but both rank near the very top of songs for the album. Together with the fully enjoyable Unbeatable Dub, they really round out a solid, very well-rounded project. In all, this album is definitely something you’d expect from an artist with such a wonderful background and rich musical foundation, so you can’t really go wrong with this brand new Clinton Fearon set.