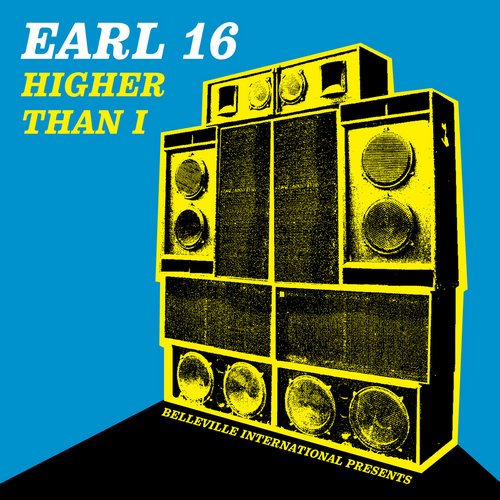 After having put out albums by Rod Taylor and Joseph Cotton in the previous months, Earl 16’s Higher Than I is the third album that has been released by Paris-based Patate Records to celebrate the 30th anniversary of its record shop and label. Just like the previous albums, this one comes in digital format on their Belleville International imprint and again it’s a set of vocal tracks combined with a batch of dub versions, in this case, five vocals and six dubs.

Jamaican singer Earl Sixteen – born Earl Daley in Kingston, Jamaica – recorded his first single in the first half of the 1970s with his group The Flaming Phonics, but it wasn’t until he hooked up with Lee “Scratch” Perry at his Black Ark Studio that he started to make a name for himself. During the period 1975-80 he recorded bonafide classics for producers like the aforementioned Lee “Scratch” Perry (Cheating and Freedom), Augustus Pablo (Changing World and Rastaman), and Derrick Harriott (Malcolm X). With Mikey Dread he teamed up for sessions backed by the Roots Radics Band and mixed by Scientist at King Tubby’s studio. Tunes such as Reggae Sound, Jah Is The Master, African Tribesman, and the album Reggae Sound all helped to build Earl’s name and reputation as a quality songwriter and singer. The first full-length album that truly satisfied from beginning to end was his mid-1980s set Showcase, which he recorded for Studio One producer Coxsone Dodd. Since then Earl Sixteen has recorded quite a few albums for various producers, but except for albums such as the Gussie P produced Wondrous Works set from 2000 and the JahSolidRock produced The Fittest from 2011, not every collection of tunes proved to be fully satisfying.

Hot on the heels of his recently released 10-track LP Moving Forward, a roots album inna Showcase style from Merge Productions, comes the Higher Than I album. While his avid fans would probably have hoped for more vocal efforts from this reggae veteran on both releases, in the end, they will be certainly pleased with his latest set as this one has no flaws, neither lyrically nor musically. This Higher Than I album showcases Earl 16’s melancholy, reflective, yet soulful, confident rebel vocal style perfectly and does justice to the considerable talents of this fine artist. Four tracks use riddims, although sometimes differently mixed, that were also utilized for Rod Taylor’s album Mister Bossman. These are all recorded & mixed by Serial P and include the Crush riddim, the Higher Than I riddim, the Mother Long Tongue riddim, and last but not least the Bye Bye Bye riddim. And then, there are the UK Roots style riddims for Praise Jah and Jah Is My Light, which bear the stamp of producer and musician Steve Mosco aka Jah Warrior. Earl 16 impresses greatly with the album opener Travelling Man, which is just candy to the ears. It’s followed by one of this set’s clear highlights, the gorgeous message song with powerful statements called Higher Than I. This boom tune definitely goes on repeat! Delivered over the Bye Bye Bye riddim, Important To Be Nice is a superb tune about the state the world is in today and how important it is to change our way of life and change or attitude. The social commentary titled Victims is a track where you might have to take a second to take in the sound before you dive into it on a lyrical level because the Mother Long Tongue riddim sounds so nice to the ears. Fans of UK Roots will be delighted when they hear Praise Jah leaping off the speakers and probably even more when the storming Steppers piece Jah Is My Light drops in. Actually, this one is more dub than vocal and a good prelude to the dub part of this set.

Even if this album features only five real vocal tracks, it’s recommended to pick up this wonderful singer’s new project.

Conclusion This album has no flaws, neither lyrically nor musically.