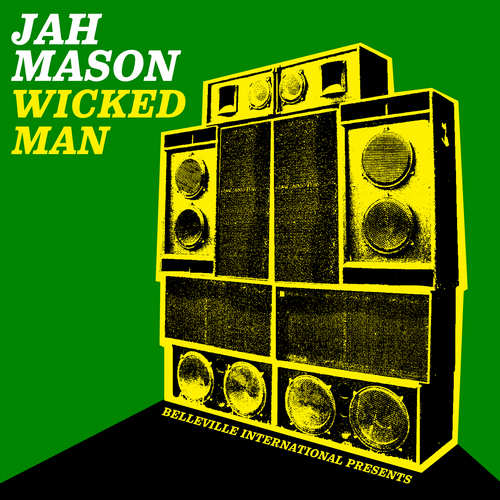 Paris-based Patate Records is going through its most prolific times since it was founded in 1992. Release after release hit the streets in previous months including digital-only albums from Rod Taylor, Joseph Cotton, and Earl 16 along with singles from Uman, Winston McAnuff, and Barbés.D. The most recent release that has been put out by Patate Records is a 6-track EP from Bobo Dread artist Jah Mason entitled Wicked Man featuring two pieces produced by Cisco and four tracks by Steve Mosco aka Jah Warrior.

Andre Johnson, better known by his stage name Jah Mason, belongs to a group of highly-rated young reggae singjays to emerge from Jamaica at the beginning of the new millennium. Under the name Perry Mason he recorded his debut single Selassie I Name Me A Call for Junior Reid’s ‘JR’ label in 1992. Because he sees himself as a builder of righteousness he decided to change his artist name to Jah Mason. Since then he started to gain more and more attention – first locally, then on an international level – due to recording some uncompromising Rasta tunes such as Money Dem A Run Down, See Dem A Flex, Dem Have And Dem Want, False Hype, Hard Mama Work, and Never Bow as well as two wicked combinations with Jah Cure, Run Come Love Me and Working So Hard. Jah Mason has been featured on many of Jamaica’s leading labels like Stone Love, Flames, JR, Mixing Lab, Solgie, Blend Them, King of Kings, Ffrench, and New Life. Since 2002, he has been regularly releasing albums with especially VP Records 2006 released Princess Gone… The Saga Bed being his most acclaimed one.

Jah Mason, who balances a ‘fire brand’ singjay style similar to Capleton, Turbulence, or Junior Kelly, is featured here with a few tunes that are sounding very familiar to the ears. Talking about Request and Saga which both were the outstanding closing tunes on the Jah Warrior produced underrated 2004 album, Most Royal. Together with their dub versions, they also appeared on two Bellevile International 7″ singles in 2004 and 2008 respectively. Request is underpinned by a truly awesome reworking of Dennis Walks’ classic “Drifter” riddim which can also fulljoyed when listening to the killer dub version It’s All About The Dub (aka Request Dub). Next comes Saga across a fresh original backdrop called Glory riddim which – in combination with its wicked dub version Ina Di Saga Dub (aka Saga Dub) – will certainly tear down the place when you pump up the volume and play it real loud. Don’t overlook the opener and title track Wicked Man and its dub, the EP’s closing track Warriors Dub, because these two efforts are also worth going on repeat.