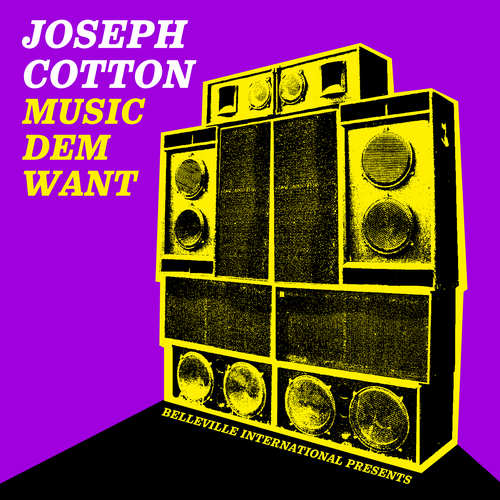 After the recent release of Rod Taylor’s album Mister Bossman as part of a special issue series intended to celebrate the 30th anniversary of Paris-based record shop and label Patate Records, Joseph Cotton’s Music Dem Want is the next album released in digital format on their Belleville International imprint. Just like the Rod Taylor set, this new Joseph Cotton collection is made up of vocal tracks and dub versions.

Born Silbert Walton in St. Ann JA in 1957, the deejay Joseph Cotton, son of the legendary Count Ossie, started his recording career in 1976 under the influence and guidance of U Roy, U Brown, Prince Jazzbo, and Big Youth. He became known as Jah Walton and recorded numerous sides for an array of producers. In 1987 he cut No Touch The Style for London-based Fashion Records, the result being their biggest seller of 1987. Half Slim was another hit for Joseph Cotton and these hits won him the accolade as Top Deejay of the year in an Echoes poll. In those days, he became a figurehead of the dancehall scene, where the deejay took precedence over the old skool singers. In the 1990s he recorded an excellent version of Justin Hinds’ Rub Up Push Up for the same label and together with Ranking Joe and U Brown toured Europe with the Blood & Fire sound system. He was sampled by Drake and worked with France’s young generation, from Biga Ranx to Manu Digital or Danakil. Just like Rod Taylor, Joseph Cotton, nicknamed “The Best Dressed Jamaican In Town” has been living in France for many years.

Joseph Cotton’s witty lyrics and powerful bouncing flow over reggae and dancehall riddims is showcased on his very first album for Patate Records/Belleville International. The downright delightful old skool vibe from the title track marks the start of an album that along with new material features three previously released singles. First, there’s the Serial P produced Internet Babies on D-Fact Crew’s Bye Bye Bye riddim from 2006. A tune with interesting lyrics delivered in fine style over a head-nodding backdrop. And then there’s also 2002 released entertaining dancehall single Plant Deh Vegetables on the Mother Long Tongue riddim, which just like Teacher Man on the Suzy riddim is another Serial P production. Of more recent times is 2020 released Gold Spoon Society on an early digital riddim called Chase Vampire. This is a real nice storytelling tune about the artist’s days in Kingston City with a fairly large part reserved for namedropping. A highlight is Parents, the sterling collaboration with veteran singer Cornell Campbell. The set is rounded off by the instrumental version of Music Dem Want, aptly titled Trumpet Dem Want, and the dub counterparts of Parents, Plant Deh Vegetables, and Teacher Man respectively.