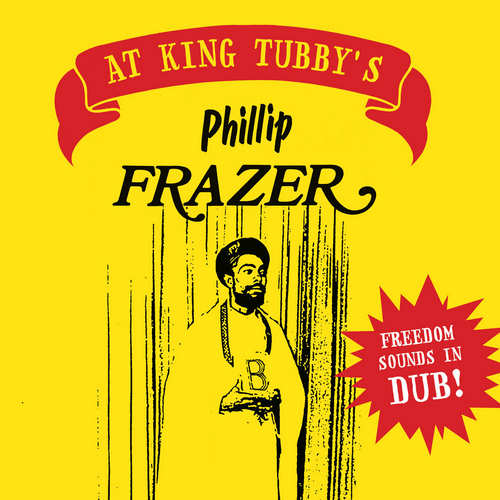 Towards the end of last year, Patate Records put out a 12-track showcase album from Phillip Fraser – with the artist’s name spelled Phillip Frazer – featuring tracks recorded for Freedom Sounds in the 1970s. Actually, Phillip Fraser was part of the Freedom Sounds collective alongside childhood friends Prince Alla, Earl Zero, and Bertram Brown. Together they produced some of the best music coming from Jamaica at the time. Voicing and mixing were done by Osbourne Ruddock aka King Tubbby and Hopeton Brown aka Scientist at King Tubby’s, while the riddims were laid at Channel One by the Soul Syndicate Band.

During his late teens, Kingston-born Phillip Fraser felt the inspiration of Rastafari and joined the Rastafarian community. Influenced and inspired to sing by the late Slim Smith, he started to improvise songs in Greenwich Town alongside his colleague Earl Zero in 1975. Earl Zero, who had already enjoyed hits produced by Al Campbell and Tommy Cowan, urged him to pursue a recording career. And thus it happened that he and Bertram Brown recorded his debut single This Time (Won’t Be Like The Last Time). which also marked the start of the Freedom Sounds label. his career went into overdrive with the releases of songs like Breaking Up, Come Ethiopians, Single Man, and Two Thousand Years. In 1978, his Bertram Brown produced debut LP titled Come Ethiopians was released on the Freedom Sounds imprint.

With the exception of Black Rose, all vocal tracks were featured on the singer’s debut LP, while dubs like Leaving Babylon and Israelite Children were featured on Blood & Fire’s 1996 released Freedom Sounds In Dub. The aforementioned Black Rose was featured on Prince Alla’s 1996 album on Blood & Fire called Only Love Can Conquer. Also noting that John Saw Them Coming and Troubles were presented ‘In Disco Style’ on Phillip Frazer’s debut LP. The album gets started with a real scorcher, the classic heavy roots vocal cut called John Saw Them Coming, which is followed by King Tubby’s awesome dub version. Next comes Children of God, a song of sheer beauty which is simply great to listen to. And the same goes for its dub version. Come Ethiopians, a killer roots tune that at the time did very well in England, comes on the same riddim as Rod Taylor’s Ethiopian Kings, but lyrically with a different concept as it came to Phillip Frazer through reading the bible a lot. The deadly dub version of that tune was created by either King Tubby or Scientist. And then there’s the solid Troubles in which the singer provides an insight into living in the ghetto. The superb Black Rose is, in fact, a collaboration between Prince Alla and Phillip Frazer and a next version to Prince Alla’s epochal mid-1976s tune Stone. Its dub version, King Tubby Ina Zion, is really nice to hear but certainly doesn’t come near to the killer dub of Stone titled Great Stone. The album comes to an end with the gorgeous 2000 Years and its dub entitled I’m Just A Rastaman.

Here you get music that is very powerful with the bass being deep and awesome and the lyric matter being a testimony to the unequal and evil arrangement of the world, created by people devoid of intelligence led by wisdom.