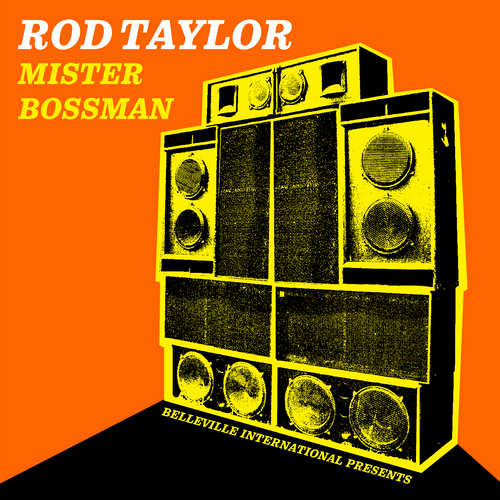 To celebrate its 30th anniversary (running since April 1992), Paris-based record shop and label Patate Records, decided to launch a series of albums or singles in digital format on their Belleville International imprint. These feature artists they have worked with and, of course, the music they love namely reggae in all its colors. Besides Winston McAnuff’s single Make It Better/Dub It Better, there has been the release of full-length studio albums from veteran artists Rod Taylor, Joseph Cotton, and Earl 16. And there are lots of new recordings coming from Jah Mason, Horace Andy, U Brown, and Cornell Campbell to name four. So, let’s start with the album that actually inaugurates the new collection, Rod Taylor’s Mister Bossman, which consists of seven vocal tracks and four dubs.

Reggae singer and producer Rod Taylor, who’s also known as Rocky T, was born in 1957 in the ghettos of Kingston JA and moved to Marseille, France, in the 1990s where he’s been based ever since. After forming a short-lived group called The Aliens with Barry Brown and Johnny Lee, Rod Taylor recorded his first single titled Bad Man Comes and Goes in 1975 for Ossie Hibbert. He then gained exposure as part of Bertram Brown’s Freedom Sounds collective (along with other reggae artists such as Prince Alla, Sylvan White, Phillip Fraser, and Earl Zero), releasing the hit single Ethiopian Kings, which led to work with Mikey Dread for who he recorded the sterling His Imperial Majesty. He subsequently worked with a variety of producers in the late 1970s and early 1980s including Prince Far I, Ossie Hibbert, Nigger Kojak, and Prince Hammer. His collaboration with the latter preceded the release of his 1979 debut album If Jah Should Come Now, which in 1980 was followed by Where Is Your Love Mankind. After almost 50 years in the business, Rod Taylor is still recording and performing with sound systems or bands.

Listening to the various vocal cuts, it’s good to hear that his voice, which has some resemblance with Horace Andy’s, hasn’t changed a bit and thus still caresses the listener’s eardrums. Also lyrically it’s on par with his classic works. The album takes off with Run Run, a great old-skool-styled roots piece that has been co-produced with Tabou 1’s Guillaume Bougard. At the end of the album’s vocal part, the track returns in the form of a gorgeous combination tune featuring the late deejay originator Daddy U Roy. Also the wicked message tune and title track, Mister Bossman, across Cisko’s recorded & mixed Warriors riddim, harks back to the old Roots Reggae style and is simply great to listen to. Next comes What Can A Poor Man Do, which shows that Rod Taylor is fully capable of managing more modern productions in a convincing way. Easily one of the strongest tunes is City Of Gomorrah as this one on Serial P’s Crush riddim is a roots killer that fires on all cylinders. With its 5mins 20seconds playing time it’s the longest track on this set. Dennis Brown’s 1970 tune Created By The Father has been covered by several artists including Errol Dunkley, Junior Delgado, and Gregory Isaacs. In 2007, a single with Rod Taylor’s version of the song was released on the Belleville International label. Fifteen years later, a remixed version of that tune on the Bye Bye Bye riddim is featured here, actually outmatching the previously released single. This Rod Taylor version is so beautiful to hear, simply excellent done! Chemical World Affair is an outstanding piece with a strong message about the state of the world today. Then it’s time to fulljoy the dub cuts of Mister Bossman (Mister Hornsman), What Can A Poor Man Do (Higher Than Dub), City Of Gomorrah (Crush Dub), and Chemical World Affair (Mother Long Dub). Actually, these are closer to instrumentals than to heavily dubbed out versions and thus are probably not really suiting the taste of hardcore dub heads.

Overall, do yourself a favour and track down this latest set of Rod Taylor and add it to your collection. Pretty sure, you won’t be disappointed.

Conclusion This is a great new album from a reggae artist who's in business for almost 50 years.