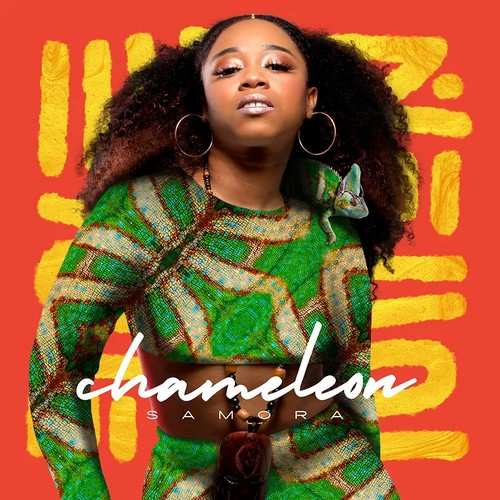 After her first international tour in 2018, her 2019 released debut album Moengo and two singles in the same year, Samora dropped 6 more singles in 2020 and had 7 singles and 5 video releases in 2021, which in 2022 is followed by her aptly titled sophomore album Chameleon.

Born in 1991 in Paramaribo, Suriname, Samora came into contact with music at a very early age and fell in love with the different sounds and styles, from Gospel to Reggae. Even as a little girl, she wanted to become a singer. When she moved to the Netherlands at the age of 14, she was able to realize her dream and turned to a career in the music business. Between 2012 and 2014 she attended the Nederlandse Pop Academie in Utrecht, founded her own band, and participated in music competitions, some of which she won. After her first two singles Amazing and My Turn in 2015, she turned more and more to Reggae-related music, which was reflected in her 2016 released Momma Said. The rest is history…

Her debut album already showed that Samora musically doesn’t limit herself by sticking to the reggae genre as Moengo featured cross-overs with pop, rock, soul, hip-hop, and R&B. On her new album, she continues to express her stylistic versatility and colorful variety, although this time in a much better and more balanced way as a result of her growth and further development as a singer/songwriter. The 13-track Chameleon treats the listener to songs that combine different styles of Afro-Caribbean music ranging from modern Dancehall to soulful Afrobeat with Pop appeal as well as Reggae in various styles. Sometimes her music is modern and energetic, sometimes it’s rootsy and dreamy.

Most of the songs on Chameleon were recorded, produced, and mixed by Swiss producers Res Staudenmann and Kiro MusicMaker, but there are also contributions from Jahwise from Brazil/Australia, Upsetta Records/Loud City Music from the USA, Bobby Beats from the Netherlands, SoundCham from Germany, and Tuffarapha from Switzerland. Included here are the two previously released singles Precious, a song that encourages women of dark complexion to become more aware of their own beauty and strength, and the gorgeous collab with Turbulence titled Please Be Mine, an ode to the indescribably strong and unforgettable moments at the beginning of a love story. Besides the collab with Turbulence, the album also features guest appearances from artists from various corners of the world including Anthony B and Jah Mason from Jamaica, La Tifa from Colombia, Dr. Ring Ding from Germany, and Guillaume Hoarau from La Réunion.

The album opens with the infectious dancehall banger Pon Di Front Road (Independent), after which the first reggae track, a solid collab with Jah Mason titled Let Them Go, leaps off the speakers. Next Samora delivers the wonderful lover’s lament Tears, a lovely tune that is easy on the ears. Modern dancehall blended with Afrobeat is what the listener is offered when the already mentioned single Precious drops in. German veteran artist Dr Ring Ding is known for his Ska and Reggae collaborations with artists including Lord Tanamo, Derrick Morgan, Laurel Aitken, Judge Dread, Vic Ruggiero, and many others. Here he adds Samora to that list with the Ska stomper My Way, which makes you wanna move your dancing feet. The next guest artist to appear is Anthony B, who joins Samora on the fine lover’s ballad All The Way. From the Reggae sound of this lovely tune back to modern dancehall with first the hardcore sound of Rise. It’s followed by the Tuffarapha produced, differently vibed Too Bad. Back to Reggae again with the collab song em>Please Be Mine. The poppy love song Take It Easy, partly sung in French, is simply beautiful to hear, especially because the voices of Samora and Guillaume Hoarau blend so well together. No need to tell what Reggae I’m In Love, the collab with La Tifa, is all about. A nice, head-nodding tune. With the dreamy sounding Is There Any Left, the listener is offered a tune that probably isn’t the easiest one to appreciate to the fullest.

With her absolutely delightful second album, Samora not only shows that she’s a very gifted artist with great potential, but also that she’s fully ready to play a prominent role in the music business.