Various – All You Need Is Love-The Beatles Reggae Songs 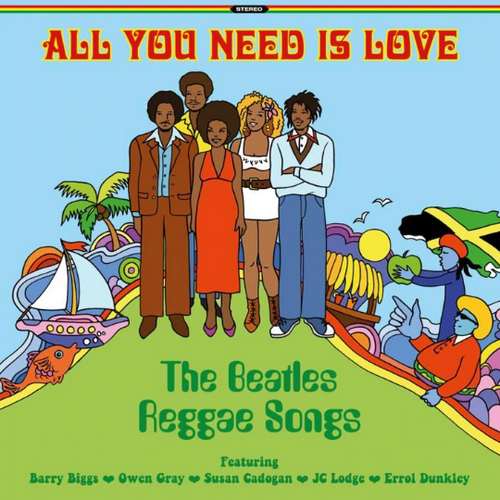 The Beatles’ songs have always been a source of inspiration for Jamaican artists and producers. The number of covers that were released, both in Jamaica and in the UK, are countless. The reggae fans who were more focused on roots/rastafari themes were not very enthusiastic about these efforts, but the older reggae fans certainly appreciated these tunes.
This album brings us 16 tracks, the majority of which are produced by Delroy Williams, the man behind Burning Sounds’ Storybook Revisited series, of which this album is also a part. Exceptions are the Barry Biggs’ tunes And I Love Her and While My Guitar Gently Weeps which were produced by Barry Biggs in Florida.

The reggae veterans who perform here have all earned their spurs in the Jamaican music business. Barry Biggs, the man with the gripping falsetto voice, delivers four covers. It remains a pleasure to listen to this reggae veteran, his voice is still up to par! Errol Dunkley is one of the most expressive voices in Jamaican music. Here too it is striking how good his voice is after such a long career. One of the three tunes he sings is You Will Never Know (I’ll Be Back). He also recorded this tune – with great success – in 1972, for Sonia Pottinger.

JC Lodge, active and successful in many areas, can already look back on a great musical career. She tackles two Beatles tunes with verve, of which Blackbird is the best known. Blackbird became a much sought-after hit in the 1974 version of The Paragons with Roslyn Sweat. Owen Gray -Jamaica’s First Home Grown Star- wraps If I Needed Someone in an uptempo reggae jacket, a less successful effort. Better are his performances of Jealous Guy and The Fool On The Hill. The closing is done by Susan Cadogan, who gained name and fame with the Lee Perry production Hurt So Good. We truly like her version of Here Comes The Sun!

As said before, this album is specifically aimed at the more mature reggae fan, who doesn’t like dancehall. If you belong to this group, this album is definitely worth checking out!