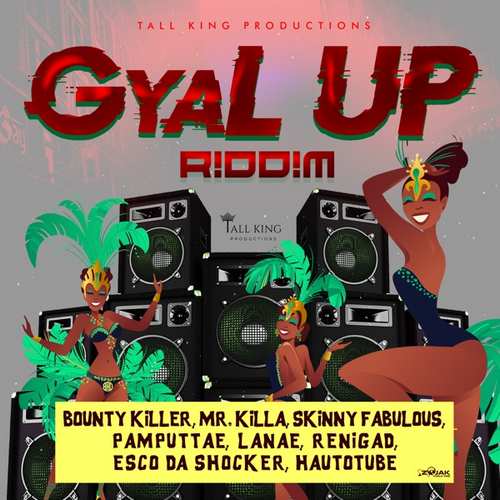 Tall King Productions brings forth the Gyal Up Riddim, which is produced by the versatile Matthew “Esco Da Shocker” Thompson who has garnered a lot of success in the entertainment industry. If the name of this producer, songwriter, recording artist, acclaimed disc jockey, and radio personality doesn’t ring a bell, it probably will when you’re told that he was one half of the duo Leftside & Esco. With their brilliant 2005 dancehall single Tuck In Yuh Belly on the Throwback Gigi riddim and 2006 single Whine Up Pon Her on the Galore riddim, they stormed to the top of the Jamaican and international charts. After a few differences the succesful duo decided to split up. Being the son of pioneer disc jockey Errol “ET” Thompson and step son of the Queen of Reggae Marcia Griffiths he was destined to become a frontrunner in music business.

Matthew “Esco Da Shocker” Thompson’s latest project is the fast-paced infectious dancehall backdrop called Gyal Up Riddim. It features cuts from Bounty Killer, Esco Da Shocker himself, and lesser known names Mr Killa, Skinny Fabulous, Pamputtae, Lanae, Renigad, and Hautotube. Longstanding dancehall artist Bounty Killer comes up with three versions of Up Deh, the ‘Clean’ and ‘Raw’ version plus the collab with Mr. Killa & Skinny Fabulous. It’s up to the listener to choose the prefered one. Also Esco in his role as singer brings a ‘clean’ and ‘raw’ version of his cut Break N Bruk. Never heard of Hautotube, so his two versions U Ukku is the first acquaintance with the young artist. He sounds nice on the riddim, but in the end fails to make a serious impression. Almost the same goes for Lanae, although she makes a slighty better impression. Pamputtae, who’s break came in 2006 when she did an intro for Tony Matterhorn’s song Goodas Fi Dem, shows that she’s more experienced than the two previous artists. The 12-track project is rounded of with the straight instrumental of the riddim.

With its energetic and refreshing feel, the Gyal Up Riddim is a dancefloor filler.