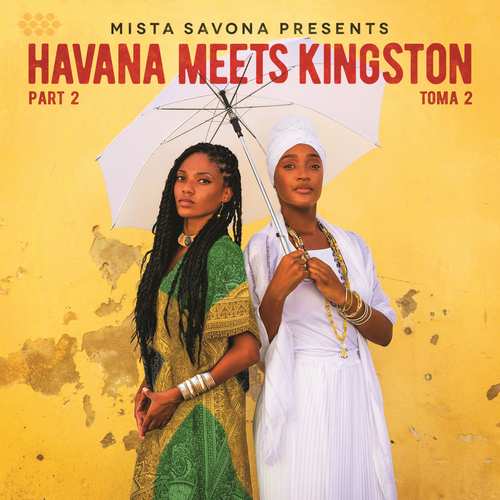 After having released a series of reggae and dub albums since 2007, Australian producer/multi-instrumentalist Jake Savona, who goes by the stage name Mista Savona, became interested in Cuban music and decided to create the Havana Meets Kingston project. For this, he brought together the maestros of both genres, including renowned Jamaican musicians like the drum & bass duo Sly & Robbie, guitarist Winston “Bopee” Bowen, and percussionist Bongo Herman to record together with Cuba’s top musicians and vocalists in the emblematic Egrem Studios where Buena Vista Social Club and many other musical gems in Cuban music have been produced. More sessions followed, other guests such as Randy Valentine, Ernest Ranglin, Aza Lineage, Cornell Campbell, Prince Alla, and Leroy Sibbles, were invited, and after years of painstaking effort, the first volume finally hit the street.

Let’s take a closer look at those tracks on this album that in particular caress the listener’s red gold and green eardrums. The first highlight is the opener, the previously released single The Fire From Africa. The very essence of the Havana Meets Kingston project fully resonates in this song with Nyabinghi drums playing a prominent role. Lyrically, Jamaican singers Micah Shemaiah and The Gideon as well as Cuban rapper PuchoMan, from the group La Armada, deliver verses celebrating the meeting of their islands. The powerful rocksteady roots song The Human Chain has the charismatic voice of Clinton Fearon blending perfectly with the riddim section of the Jamaican riddim twins Sly & Robbie. The timely song is a cry from the heart, a bitter observation of a humanity divided by resentment and jealousy, weakened by the greed and poverty that surrounds the world. Next comes the optimistic song We Can Do It (Solutions) by the underrated Stevie Culture, the former lead singer for The S.A.N.E. Band and a prominent record producer. It’s a big tune that deserves to go on repeat. Micah Shemaiah’s Destiny is backed by an infectious riddim. This track touches on the in reggae often used ‘back to Africa’ theme. “Rasta people, Christian people, where is your destiny? Cuban people, Jamaican people, where is your destiny?”

Absolutely great to see a track featured on this album from the criminally underrated The Jewels featuring of Glasford ‘Porti’ Manning. While in Jamaica in 2014, Mista Savona finally found him living in utter poverty in a hut in the hills above Kingston with a little help from Peter I who interviewed him for reggae-vibes.com around 2004 – Read the interview. On this album, the now completely blind veteran together with one of the other original singers of the group does a superb do-over of The Jewels’ Slave Trade, a huge roots piece from 1979 produced by Trevor “Leggo” Douglas. From another Jamaican veteran, Prince Alla, comes the roots anthem We Are One. It’s voiced over a gorgeous reggae riddim recorded at Tuff Gong studio and featuring a guitar solo by Earl “Chinna” Smith. This track brings to mind the artist’s best days with Bertram Brown’s Freedom Sounds.

Don’t be bothered if you, like us, aren’t really into Cuban music. Pretty sure, you’ll find it a joy to listen to the tracks with a strong Cuban element. While the infectious Siempre Si (meaning Always Say Yes) still has a nice Jamaican kind of groove, it’s when the dance number Guarachará drops that the listener is drawn into the vibes of Havana nights. The song opens with a touch of flamenco, then builds into a classic Cuban son before exploding into a high-energy salsa/timba groove that dancers will find impossible to ignore. Previously available on a 5-track EP from accomplished Cuban singer Brenda Navarette, the title track Havana Meets Kingston is another dancefloor filler. The same goes for the joyful Reggae Y Son, which has that all-out Cuban horn extravaganza.

Conclusion In all, a more than worthy follow-up of the project's first part.