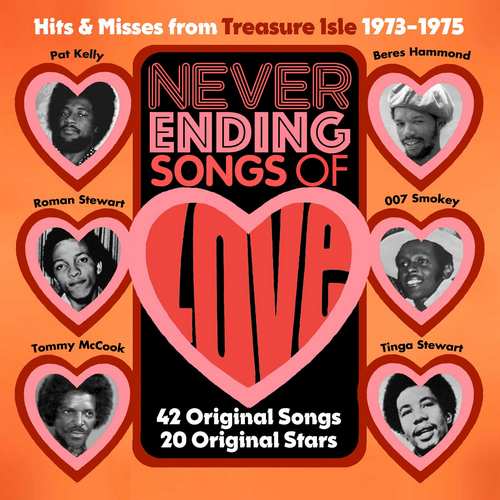 This collection features recordings from Duke Reid’s legendary label. 40 tracks, 35 new to CD and includes numerous Jamaican hits by some of Reggae’s finest artists. 1975 saw Duke Reid selling his record company due to ill health to Sonia Pottinger, this virtually ended the Treasure Isle story. All but 7 of the tracks are previously unavailable on CD and this covers a period of great Jamaican music. Let’s now take a look at a selection of the tracks on this disc.

1: CHATTY CHATTY MOUTH – The Mello Larks. Sounding somewhat like The Maytals, this is a fast punchy Reggae sound. It comes with a lead vocal and a female backing chorus on an uncomplicated rhythm track, nice guitar work mid-way through. Good track to start disc one. 3: BABY COME ON HOME – Pat Kelly. Released on the pink and white Duke Reid label this is a slow number on which Pat is joined by a female chorus. Written by Mr Kelly he is backed by Earl Lindo & The In Crowd Band. Soulful vocal glides over the rhythm track. 6: HIGH SCHOOL DANCE – B.B. Seaton. This comes from around 1974 and on the backing we have Concious Minds. This fast-moving slice of cool Reggae takes its riff from the song ‘Make The World Go Away’ recorded by several mainstream artists. B.B. Seaton deserved to make it in the UK charts but never did. 8: KISS ME HONEY – The Chantells. This relatively unknown outfit had a make-up of Lloyd Forest, Tommy Thomas and Samuel Bramwell. On this recording they have taken on a song recorded by Shirley Bassey way back and although a slower version it takes the Reggae rhythm really well. Can be found on ‘Duke Reid’s Greatest Hits’ album and at 5mins 18seconds is longer than many Reggae tracks. 10: NEVER ENDING SONG OF LOVE – Smokey 007. This artist will not be widely known but he does a fine job on this which is a cross between Reggae and Calypso, moving along at a fast pace. Smokey gives the listener a cool vocal on a song taken to the top of the UK charts by The New Seekers. 13: MY PRECIOUS LOVE – The Saints. This comes once again from another of the lesser-known Jamaican outfits and is a stomping slice of Reggae. It has some good guitar and percussion on the rhythm track and is a catchy number, never having been previously released. 16: WOLVERTON MOUNTAIN – Roman Stewart. This is a typical Pama Records recording, released on the Camel label in 1975. This is a straight Reggae version of a much-recorded song. Roman is helped out at various times by female backing vocalists and Roman gives a pleasant vocal. For the record, Roman is the brother of Tinga Stewart and his first recording was in 1968. 19: TONIGHT IS THE NIGHT – Claudette Miller. This Duke Reid production features a singer who was much underrated and this number shows the listener why she should have gained higher praise. It is a mid-tempo sound with a chug-along rhythm track with clear and precise vocals. 22: REVELATION – Mind, Body & Soul. A cool slice of Reggae produced and arranged by B.B. Seaton, writer unknown. Mr Seaton could be a member of this outfit as the vocal sounds familiar. Nothing complicated about this, would look for further recordings by this outfit. 24: MIKE – Sly Roker & The Slick Connection. This has more of a Calypso rhythm, from an outfit that will no doubt be new to many Jamaican music fans. Female chorus on the backing and when released in Jamaica it was on Duke Reid Greatest hits.

To sum up this two CD collection comprising of known and unknown tracks, some from artists we will be familiar with and others probably not one has to say that CD 1 is a collection of top Reggae sounds. The second disc is full of fine Dub sounds, that may not be for everyone and some of which are versions of tracks on the first CD. Overall this is a good collection from Cherry Red Records and comes with the usual formative eight-page booklet at £11 99p from the above record company it is worth adding to any Jamaican music collection. Happy Listening!

Claudette Miller – Tonight Is The Night

Conclusion CD One is a collection of top Reggae sounds, while the second disc is full of fine Dub sounds.