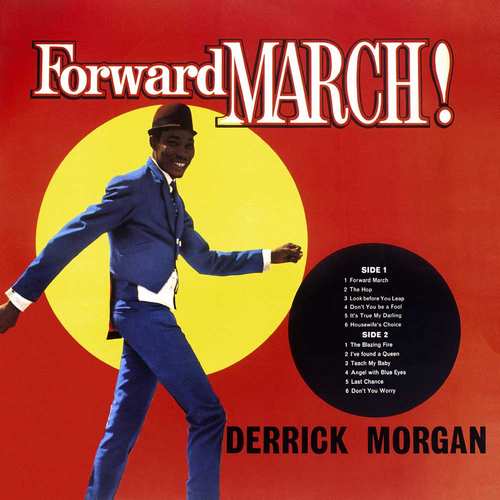 This collection commemorates Jamaica’s 60th year of independence and Doctor Bird presents Derrick Morgan’s album, the title track becoming a national anthem for the Jamaican public in 1962. The album has not appeared on CD before and the collection includes the remainder of Derrick’s early recordings for Leslie Kong on Beverley Records, 1961 to 1963. The second disc focuses on Derrick’s return to Beverley’s during the Rock Steady era and the album ‘Best Of’, first issued on Doctor Bird in 1969. It is bolstered with various Rock Steady and proto-Reggae recordings for Doctor Bird.

1: FORWARD MARCH. Starting off with the words Forward March over a military style intro this becomes a Blue Beat number with a fine vocal from Derrick. As mentioned previously this commemorates Jamaica’s independence and is a great opening to this disc. 2: THE HOP. This again is a Blue Beat number and has a mid-tempo jump rhythm track with some fine saxophone playing. Very much a toe-tapping sound. 3: LOOK BEFORE YOU LEAP – Derrick Morgan & Patsy Todd. Derrick is joined on this by a female singer who Derrick often recorded with. This is faster than previous tracks and Derrick takes the main vocal with Patsy coming in at various times throughout. 4: DON’T BE A FOOL. This comes as a soulful number without the Jamaican rhythm. Some good organ mid-way and another catchy sound. 5: IT’S TRUE MY DARLING – Derrick Morgan & Patsy Todd. On this track we go back to the Blue Beat sound and Patsy has more of the vocal. The rhythm track comes with some fine sax playing and the overall sound has a country feel. 6: HOUSE WIFE’S CHOICE – Derrick Morgan & Patsy Todd. For followers of Derrick’s recording career, this track will be familiar and was originally titled ‘You Don’t Know’. The song never mentions the title in the lyrics and it was producer Leslie Kong who changed the title for radio purposes. It was a popular recording in both Jamaica and the UK. 7: BLAZING FIRE. This starts with a short spoken intro before going into a classic Blue Beat style. The rhythm track comes with some fine trumpet playing and it turns out to be a sing-along number. 8: I’VE FOUND A QUEEN. On this track, we hear the lilting melodic style of Louisiana Rhythm and Blues. The trumpet playing on the rhythm track is classic and the whole sound get one jigging along. 9: TEACH MY BABY. This comes with a rhythm track slightly more towards the Ska sound even though it remains a Blue Beat sound. Derrick’s vocal is soulful and full of classic tones and overall it is a fun number. 10: ANGEL WITH BLUE EYES. This track comes without a Blue Beat rhythm but has Calypso tones. Slower than previous tracks and has Derrick softening his voice to emulate Wilfred ‘Jackie’ Edwards who was having hit after hit in Jamaica with dreamy ballads in this style. 11: LAST CHANCE. Another track on which Derrick tones down his voice to give the listener a smooth Soul sound. Some fine organ playing on the rhythm track, a nice change of style, suits the Derrick Morgan voice. 12: DON’T YOU WORRY – Derrick Morgan & Patsy Todd. This was the final track on the original album and takes the listener back to the Blue Beat sound. We find Patsy back on board for this toe-tapping number and it was a fine way to finish the original album.

13: NO RAISE NO PRAISE. This again is Blue Beat at its best with some fine sax playing midway through. The rhythm track moves at pace and we end up with a catchy number. Originally released on the Island label. 16: GYPSY WOMAN – Derrick Morgan & Patsy Todd. This is based partially on The Impressions song of the same name. It comes as an early Soul style number until we have the harmonica sound that gives it a Jamaican feel. The backing is supplied by The Beverley All Stars. 18: SUNDAY MORNING (aka SHE IS GONE). Originally released on the legendary Blue Beat label in 1962 Melodisc Records Ltd. The punchy rhythm track gets the body moving, as always Derrick is on top form on a self-penned recording. 21: SEE AND BLIND. More of the same Blue Beat on this self-penned number with some fine sax playing mid-way through. Original release on Island’s red and white label in 1962. 24: CHERRY HOME. This track was the top side to the previous track and is a rougher sounding Blue Beat number. This time it has a trumpet solo mid-way through and towards the end. UK release on 7″ vinyl in 1962 27: DOROTHY. This is a Beverley’s pre 1962 recording and was released in the UK in 1963. This number moves along and gets the toes tapping, who Dorothy is one has no idea, this is 2min 13secs of top-rated Blue Beat. 30: TELL IT TO ME. This was recorded on the yellow and black Beverley’s label in 1962 and had ‘The Hop’ on the top side of the single. This comes without a Jamaican rhythm track and is a soulful sound with some fine brass on the backing. This track is the final one on disc 1.

DISC 2: THE BEST OF DERRICK MORGAN

The original album release was on the Doctor Bird label in 1969 and the original album is bolstered by a further 17 bonus tracks. We take a look at a selection of the tracks. 1: TOUGHER THAN TOUGH. On this Derrick is backed by Desmond Dekker’s group The Aces. It was released in 1967 and co-written by the vocalist and producer Leslie Kong. This is a top-rate slice of Blue Beat at a mid-tempo pace and has cool piano playing on the rhythm track and a vocal about a Rude Boy being in court. Great recording to start this disc. 2: WOMAN A GRUMBLE. This 1968 release has various vocalists on it even though Derrick is given the vocal credit. A full-on sound with a pulsating rhythm track on which we have sax and trumpet. Once heard it is hard to get out of one’s head. 3: DO THE BENG BENG – Derrick Morgan (with Desmond Dekker). Not one but two Jamaican legends on this, Desmond being on the harmonies with his brother George. This has a floating rhythm track and the vocal mentions the Rude Boy genre. Some of the vocal is spoken and was released in 1968, co-produced by Derrick along with Leslie Kong. 4: COURT DISMISS (aka THE RETRIAL OF RUDIE). As on many of Derrick’s recordings we hear about Rude Boys and this is no exception as expected from the title. This overtones of Prince Buster with some of the vocal being spoken. Released in UK 1967. 5: NO DICE. Another top-notch recording on which along with Derrick we have a female helping out on the vocal, could be Patsy Todd but given no credit on the album. Some fine brass work on this toe-tapping sound 6: ME NAW GIVE UP (aka WHAT A LA LA BAMBA). Derrick Morgan (featuring George Agard) George Agard was a member of The Pioneers during their heyday. Released in 1968 in the UK on the red and black Beverley’s label. Derrick is on the main vocal with George backing him up, vocalising in a polish way. This is a boss sound and had ‘Johnny Pram Pram’ on side two when issued as a 7″ single. 7: JUDGE DREAD IN COURT. Another Prince Buster style sound and another court in session sound. Derrick’s vocal is spoken with a chorus on the backing track. This is top notch and the words should be carefully listened to. 8: WHAT’S YOUR GROUSE. This, as with the previous track has Derrick on a spoken vocal and he is heard having a telephone conversation with a female. This like many of Derrick’s recordings was aimed at the skinheads of the time. 1968 single release with the B side by The Beverley All Stars is a Ska sound 9: KILL ME DEAD. 1967 release with the 7″ single and Derrick is back to a semi-sung vocal along with a female chorus. This is a Rock Steady scorcher with sexy lyrics. 10: JOHNNY PRAM PRAM – Derrick Morgan (with George Agard. This sounds like Desmond Dekker’s ‘Problems’ and is another skinhead boss sound. Fast-moving sound on which the two vocalists complement one another. 11: GREEDY GAL. On some of the releases of this song, he is joined on the credits by Yebo, who this is one has no idea. The vocals work well together on a catchy sound, again it has a slight Desmond Dekker feel. Released in 1967 on Beverley’s red and white label as a 7″ single and for the record had ‘The Cat’ by Roland Alphonso and The Beverley All Stars on the b side. This was the final track on the original album.

There are 17 bonus tracks on this disc and as usual we take a look at a selection of these. 12: I AM THE RULER. Starting off the bonus tracks we have a Rock Steady number on which Derrick is helped out by backing vocalists at times. Good sax work on the backing and released in Jamaica on the red and black Beverley’s label at 135a Orange Street, Kingston, Jamaica. 15: WANT MORE. A mid-tempo slice of quality Rock Steady with a smooth backing track. Released on the Pyramid label in 1968 it shows off Derrick’s slick vocal to the fore. On the b side as a single recording it features Roland Alphonso with ‘Goodnight My Love’. 18 DON’T SAY – Derrick & Pauline Morgan. Strange backing track on this, not sure what genre to put it under. Pauline Morgan was Derrick’s sister and together they blend well. This track can also be found on the album ‘Moon Hop – The Best Of Derrick Morgan 1960 – 69’ released by Trojan Records. 21: TRY ME. No problem with the genre on this, Rock Steady all the way. The backing track is straight and Derrick gives his usual clear and cool vocal. Can also be found on the album ‘Do The Beng Beng’. 24: I’M LEAVING. On some recordings of this song the vocal credits go to Derrick and Hortense Ellis but not on the information booklet that comes with this collection. This is Rock Steady and has a jumpy rhythm track. Released in 1968 and produced by Leslie Kong as a vast number of Derrick’s recordings have been. 26: WILL YOU MARRY ME – Derrick Morgan & Pauline Morgan. This track comes across as a nursery sound on which Derrick and sister Pauline take turns on the vocal. This has a raw Rock Steady rhythm played by Lynn Taitt and his band and was recorded at the Federal Studio.28: BE STILL. Starts off with a long instrumental intro before Derrick gives a polished vocal on a classic Rock Steady number. Released on the Prince Buster label in Jamaica and not given a UK release. This comes as the final track on disc 2 and the collection as a whole.

To sum up this collection, if you are looking for a comprehensive collection of Derrick Morgan recordings this is a good way to purchase it. All the tracks are produced by Leslie Kong and feature many recordings new to CD and this is a perfect way to pay tribute to one of Jamaica’s greatest foundation artists. Again Cherry Red Records have come up with another classic collection at £12 99p.