Lutan Fyah – These Are My Better Days 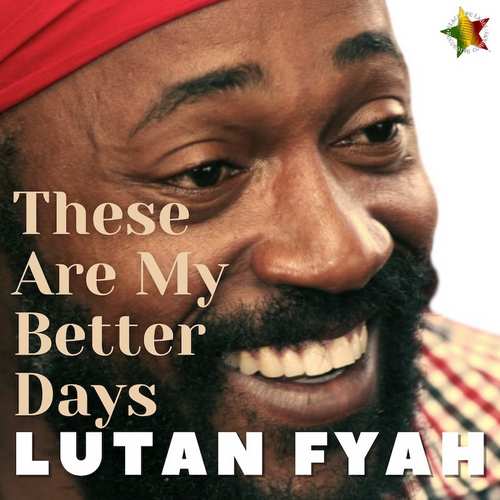 Despite being a huge fan of conscious reggae and the Rastafarian lifestyle that drives the music of artists like Luciano, Sizzla, Anthony B, and Capleton to name a few, I’ll be the first to admit I don’t know all there is to the ethos, mantras, and principals that they adhere so strongly too. Many of us who are fans simply appreciate the message of black self-awareness and reliance on “Jah” in their lives, and relate on some level to the music, all of which the aforementioned have produced both prolifically, and exceptionally. One thing you can’t call the Rasta man is lazy, as Lutan Fyah, a torch bearer for the movement, proves what followers of these artists have always known. Each one of these iconic performers could produce an album’s worth of material in their sleep! I once opined to a friend that there are three certainties in this world: death, taxes, and a new Sizzla album. He’s that prolific. You get the joke, but a glance at the discographies of these gentlemen shows that there’s mostly proof in that pudding.

These Are My Better Days is the latest offering from the Bobo Shanti representer, and adds another notch in Lutan’s 20-year career. Over that time, what has made artists like him so popular is that voice. Whether you’re in your favorite reggae club, or simply vibing to a selecta in the way that suits you best, there is no mistaking that melody and chat style. Confident, bold, and seasoned to perfection (a little nod to the chalice perhaps?) Fyah’s voice grips you up, and takes you exactly where HE wants you to go. For this album however, I wish I could say it was a place of enjoyment. A short play of only 8 songs, T.A.M.B.D opens strongly enough on the title track, setting a midtempo, minimalist riddim, allowing Lutan to dominate nicely with a lyrical stiff arm to hypocrites and foes who try to stress him out despite the reassurance of Jah’s blessings. This being my favorite song on the album, we slowly go downhill from here. The next track, Live Up, sports a ’90s style dancehall track, which while nice, clocks in at a little over 2 minutes, not quite satisfying my desire to hear Lutan murder it as only he can. He follows up with Back To School which sounds as if it were a Chaka Demus & Pliers studio session reject track. Featuring a call and response with a bunch of kids imploring them to get an education, (“Children, Children”….”Yes Daddy?”) it reeks of a good idea gone bad. Love the message, hate the song! T.A.M.B.D also shows that Rasta business isn’t impervious to attempts to appeal to the R&B crossover market, with three sleep-inducing submissions, When Will Africa Unite, Wild Princess, and the album’s closer She Love the Rastaman. Bogged down with lazy production, and listless choruses, songs like this are sometimes a sobering reminder that not everyone has the ‘Koffee/Chronixx’ budget where the best producers across multiple genres can be tapped.

In summation, I wouldn’t go so far as to label These Are My Better Days a throwaway album. I have too much respect for Lutan Fyah’s resume, and what he brings to reggae music. However, when you compare this latest project to the utterly remarkable Longest Livah, released by Lutan just 3 years ago, the difference is pretty damning. In combining forgettable, underproduced tracks and songs that end way too soon (Honey another worthy cut is literally 2:00 long!) it’s entirely fair for those of us who expect better to quickly shove this album aside and wait patiently for the next L.F gem. In the meantime, we’ll always have that new Sizzla album to hold us over!

Conclusion Unfortunately, this isn't one of Lutan Fyah's best projects.