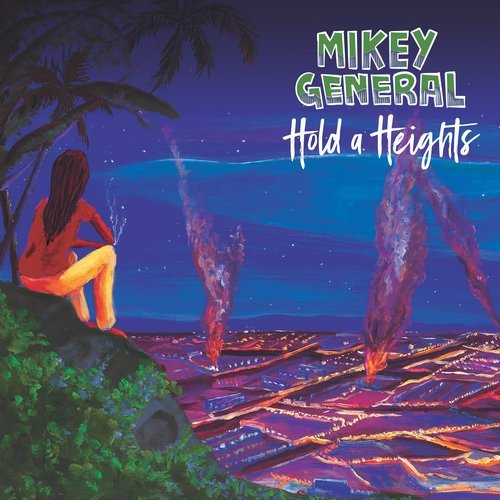 In 2020, Mikey General released the Rawle Collins produced album We The People, which came to fruition via the artist’s own Qabalah First Music and the small American record label Footprintz Music Group. For the creation of a follow up of one of his most solid albums, Mikey General teamed up with producer Kris Kemist of UK based Reality Shock Records. And thus, two years after the release of We The People, the brand new album entitled Hold A Heights is out on streets.

Michael Taylor aka Mikey General is a veteran of over 40 years in the reggae music business. Born in the UK and growing up in Jamaica from the age of 2, he recorded his first single Roots Mi Roots for sound system owner Ruddy Silence in 1980. He returned to the UK in 1982, and three years later the Dub Vendor produced track Dancehall Vibes earned him ‘performer of the year’. After 10 years in England, Mikey General moved back to Jamaica where he met Luciano for the first time at Castro Brown’s New Name Studio in 1993. They not only became good friends but also became mainstays in Phillip ‘Fatis’ Burrell’s Xterminator Crew. It was the time when Mikey General grew his dreadlocks, adopted a true and natural lifestyle. Throughout the years that followed, he managed to establish himself as one of the prominent reggae artists of his generation.

Listening to this album from beginning to end, it’s obvious that producer/musician Kris Kemist has done a fine job and, for his part, Mikey General has done exactly what we’ve come to expect from him by delivering another solid piece of roots reggae music. To get this set started with the title track, Hold A Heights, is an obvious choice. It’s a superb song with a relaxing vibe that will surely be appreciated by more seasoned reggae fans, although those not very familiar with Mikey General will most likely value this tune too. In all, the perfect opener for an album that turns out to have a handful of outstanding and nearly outstanding songs. Next comes the gorgeous Integrity with a beautiful riddim behind it, undoubtedly one of the best listens on the album. One of the biggest efforts is Revolution, which is done in collaboration with Jamaican art collective and roots reggae dub poetry band No-Maddz comprising Sheldon “Sheppie” Shepherd and Everaldo “Evie” Creary. Another winner and, just like the previous mentioned track, one that goes on repeat is the wholly satisfying praise called Praise HIM. Another track that deserves to get a special mention, not least because of its captivating sound, is the ganja tune Can’t Leave It Alone. And then, at the end of the album, there’s the collab piece with Yared entitled Look Within, which is a true gem and thus rightfully can be ranked among the best tracks of this album.

Hold A Heights is a mightily interesting album from an artist who is internationally known for his unique voice and conscious lyrics.