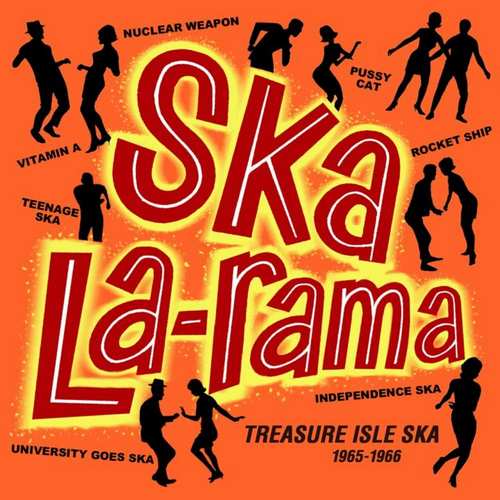 DISC ONE: FROM THE CHARTS

DISC ONE: FROM THE CHARTS

1: SKA LA-RAMA – Lyn Taitt & The Comets. This sound opens the disc and is the collection’s title. This time around Lyn Taitt is with The Comets and not as usual The Jets, could be one of the same. 3: INDEPENDENT SKA (PUSSY CAT) – Baba Brooks £ His Band. This fast-moving number naturally has great trombone from Baba along with other percussion. First released in the Summer of 1965 this can be found on several vinyl albums and the CD collection ‘Jump Up Calypso’. On 45rpm this was released on the red and white Island label. 6: KOO KOO DOO – Stranger Cole & Owen & Leon Silveras. This comes with a fast Ska/Calypso rhythm and combined vocals. Stranger is in top form with two artists new to me and many more Jamaican music fans no doubt. This comes written by Stranger and is a get up and dance number. 9: DUCK SOUP – Baba Brooks Band. This first appeared on the album ‘Intensified Original Ska 1962 – 1966’. It is a very fast moving number with two of Jamaica’s best playing together. As a 45rpm single it was released on the red/white Island label in 1965. It’s a stone cold classic and a Ska rave. 11: NUCLEAR WEAPON – Roland Alphonso & Baba Brooks. Written by Roland Alphonso and released on the Treasure Isle and Ska Beat labels in 1965. It moves and grooves with take-off sounds and some spoken lyrics towards the end, an epic 2min 59sec sound. 14: RUN JOE – Stranger Cole & Techniques. This starts with Calypso tones although it is a Ska sound and Stranger is helped out by backing vocals on this catchy number. Techniques are given credit on this collection but on the single release, it is Baba Brooks Band given the credit for the backing track. Can be found on the album ‘More Intensified Vol.2 Original Ska 1963 – 67’ and released on the Treasure Isle label as a single in 1965. Good old early Ska. Awesome. 16: DON’T CALL ME DADDY – Derrick Morgan. Another Jamaican legend on this number that was released on the Ska Beat label in the UK in 1965. Again this is a fast moving track on which one hears some fine trumpet playing behind the unmistakeable vocal sound from Derrick. It comes together as a Boss Ska tune. 19: VITAMIN A – Baba Brooks Band. This can be found on the albums ‘Street Corner Ska Classics’ and ‘Original Rude Boy Sound’ and was the flip side to Alton Ellis’s ‘Dance Crasher’. It has great percussion playing and the usual well-known Ska click sounds and it ends up a catchy sound and one sees it as a heavy monster sound. 21: STAMPEDE – Don Drummond & Baba Brooks. Two Jamaican legends on one track, what more could you want. This Island 7″ from 1965 had Justin Hinds & The Dominoes ‘Come Bail Me’ on the other side and strangely on the original release the credits went to Don Drummond and Drumbago. This catchy number has all the attributes of a great Ska recording, great musicianship and the Ska click etc. The tune gets one bopping around and feeling good. 23: YOU ARE A FOOL – The Clarendonians. Originally released on the Ska Beat label it is not a Ska sound but a slow soulful recording that is cool and soft and released in 1965. This outfit consisted of Ernest Wilson, Pete Austin, and also Freddie McGregor. 26. TRIBUTE TO DON – Roland Alphonso & Baba Brooks. Recorded on the Treasure Isle label, it has a pulsating rhythm track. This is the real deal in Ska terms and of course is a tribute to the legend that was Don Drummond, The listener will find it hard not to groove to this 3min classic track, a fine way to conclude disc 1.

DISC TWO: FROM THE VAULTS

1: GUNS FEVER – Baba Brooks & His Band. Released on the red/white Island label in 1965 this is a classic Ska sound with all the expected click sounds. This is a cover version of a song named ‘My Shawl’ by Xavier Cougar and this is a fine start to this disc. 4: FORTY MILES OF BAD ROAD – Lyn Taitt with Baba Brooks & His Band. Originally a hit for Duane Eddy in the 60s, this Ska version was the flip side to ‘Wake Me’ Shake Me’ by The Zodiacs. This tune lends itself well to Lyn & Baba’s version and comes over as a fine sound from more of the Jamaican legends. 6: SMOKEY SKA – Baba Brooks & His Band. Very short spoken intro on a classic slice of Ska that comes with the click sounds. This was the flip to ‘Renegade’ by The Zodiacs that appears on disc 1. Originally released on the Treasure Isle label. 9: VERONA (Take 3) – Justin Hinds & The Dominoes. Justin Hinds and his backing outfit give a professional performance on this catchy Ska number. Justin is helped out on the vocals by The Dominoes. This track can be found also on the box set ‘Trojan Ska Vol.2’ A move and groove sound. 10: STORM WARNING (TAKE 3) – Lyn Taitt & The Comets. This is a take on the original recording and is not vastly different. Lyn and her band give a polished sound and the trombone playing is excellent. Catchy sound and also a track on the ‘Classic Ska Essentials’ collection. 15: LOVE ME OR LEAVE ME (TAKE 2) – Owen & Leon Silvera. Backed by The Baba Brooks Band this came out on the Dutchess label in the UK and produced by Duke Reid. Nice catchy number with cool vocals and a classic Ska rhythm track. 3mins 18secs, can be found on the limited edition box set ‘Treasure Isle Ska Rarities’. 18: I’M ALL ALONE (TAKE 2) – Frank Cosmo. Backed by The Baba Brooks Band the vocalist does a fine job on this excellent slice of foot-tapping Ska. More fine trombone work mid-way and the overall sound has a slight Calypso feel. 20: THE CLOCK (TAKE 2) – Baba Brooks & His Band. This is as laid-back as Ska ever gets and is a groove sound. Excellent brass work and was released in 1966 on the Treasure Isle label. 23: WHAT A BAILING (TAKE 4) – Duke Reid’s Group. This was released on the Dutchess label in the UK ON 7″ vinyl. Backed by The Baba Brooks Band this vocal sound has a hard to understand vocal. Trumpet work mid-way is first-class and this gets the feet-tapping during the 2min 34sec. This is also on the ‘Ska Rarities’ collection. 26: AFTER THE STORM – Baba Brooks & His Band. Credited to Baba Brooks & His Band on this collection, on the original release on 45 rpm it also credits Justin Hinds & The Dominoes. It seems that as this is a vocal sound Justin Hinds must have been present. The track sounds very much like ‘Carry Go Bring Come’ recorded by Justin, this was released in 1966 on Treasure Isle. The track comes as the final recording on disc 2 and completes the collection.

This 52 track, 2CD collection contains recordings from many of Jamaica’s finest artists and from start to finish the collection has a good feeling. Cherry Red Records have come up trumps again with yet another fine collection. This is an essential purchase for anyone who remembers the very best Jamaican Ska sounds. At £12 99 this is outstanding value.

Derrick Morgan – Around The Corner

Conclusion From start to finish the collection has a good feeling