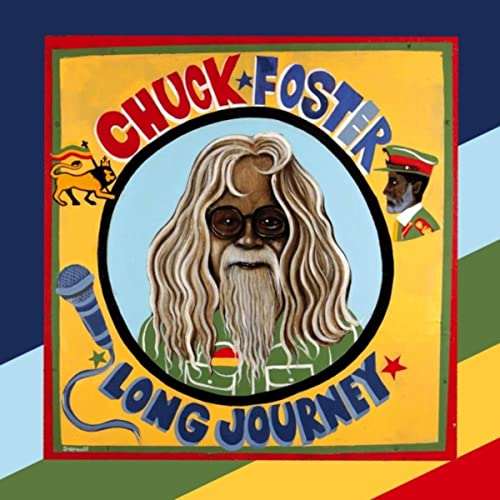 1 Get Up
2 Long Journey
3 Babylon Chain
4 Too Much Confusion
5 Compass
6 Duke of Oblivion
7 How You Feel
8 Mr. Businessman
9 Passion and Compassion
10 On My Own
11 Pancho Villa
12 Dread A Dread
13 Not Too Late
14 You Can Change It All
15 The Way
16 What About Love
17 Path of Freedom
Recently we received Chuck Foster’s latest set, entitled Long Journey, which is his eight vocal album. Although he has been active in the field of reggae music for decades, in the beginning, his musical preferences were more focused on blues and rock. Fortunately, he became infected by the reggae virus in the early 1970s. What followed can be described without exaggeration as an impressive career as a writer, musician, and producer. As host of Reggae Central on KPFK radio in California, he regularly presents positive reggae music to a loyal audience. He is also the owner/founder of Catch Me Time Records.

As a musician, he regularly releases music, inspired by traditional roots reggae. Chuck is averse to gimmicks, his music is authentic, ‘live’, played by a group of competent musicians, including Soul Syndicate’s guitarist Tony Chin, Studio One stalwart Tony Bird, Zacky Bernard (Twinkle Brothers), and long-time compadres Mike Irwin and Mystery Man. His style of singing is unadorned, his tonal range is limited, and he sings straightforwardly, seemingly effortlessly. He takes his themes from everyday life, he observes, describes, and then gives his frank opinion, in which he stands up for the weak and the needy in society. The basis of his songs is the Jamaican drum and bass pattern, in which he mixes touches of rock and blues. It is to his credit that he makes little use of the well-known Jamaican riddims, and only plays songs written by himself. Also on this album, on which he performs no less than 17 tracks!

Everyone can find something to their liking here. Tunes that we played more often are Dread A Dread, the catchy Duke Of Oblivion and the biting Mr. Businessman. Songs that should also not go unmentioned are Babylon Chain, the remarkable track Pancho Villa and the convincing title track Long Journey. Compass also has the good vibes, helped by a beautiful ‘vintage’ arrangement! In addition, there is the positive You Can Change It All, a song that you immediately start humming along, so to speak.
In summary, we can safely say that Long Journey does not disappoint us, of course, it does not bring musical surprises, but solid good traditional reggae, sung from an authentic reggae heart. And that last one is worth a lot!