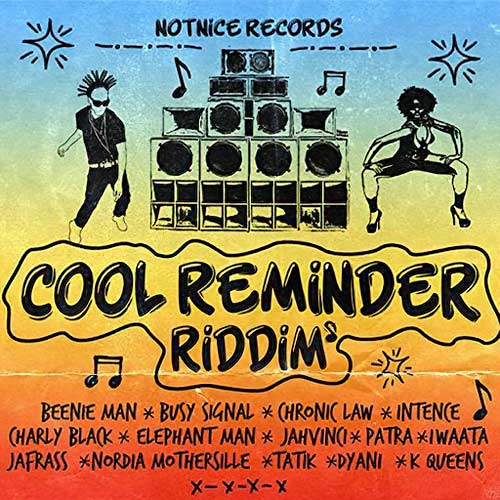 1 Beenie Man – One More Time
2 Busy Signal – Lock The Place
3 Chronic Law – Notice
4 Intence – Heads Up
5 Charly Black – Slow Wine
6 Elephant Man – Cool Reminder
7 Jah Vinci – One Less Trouble
8 Jah Vinci – No Boundaries
9 Patra – Love Your Body
10 Iwaata – Perform
11 Jafrass – Level Up
12 Nordia Mothersille – When I’m Alone
13 Tatik – My Style
14 D’Yani – Lose Mi
15 K-Queens – Teeny Tiny
Biggup NotNice in a major way as, earlier this month, he did us all a big favour when he set out his latest creation, the Cool Reminder Riddim. I try not to make it a habit out of thanking people for doing what they’re supposed to do, but that is what I find myself doing at the moment given the dearth of such things: I am thanking a DANCEHALL PRODUCER for making DANCEHALL RIDDIM (biggup Frass as well with the Dancehall Night Riddim)! Unfortunately these are so rare these days that I now feel the need to celebrate such moments when they occur.

The Cool Reminder Riddim is absolutely golden AUTHENTIC DANCEHALL MUSIC and something which almost brings tears to my eyes. It is such a sweet vibe that has gone away and I MISS IT DAMMIT! Handling the vocal duties are the likes of Beenie Man, an impressive Chronic Law, Patra (YEP), Busy Signal, Tatik who does very well on My Style, and others.

Still, taking top honours here is a downright DOMINANT Ele who reigns supreme with the riddim’s title track. Hopefully, courtesy of NotNice and some of his peers (like Frass and Suku), we arrive at a place where such productions are far more frequent, but until then (and even after then) – the Cool Reminder Riddim will THRILL.