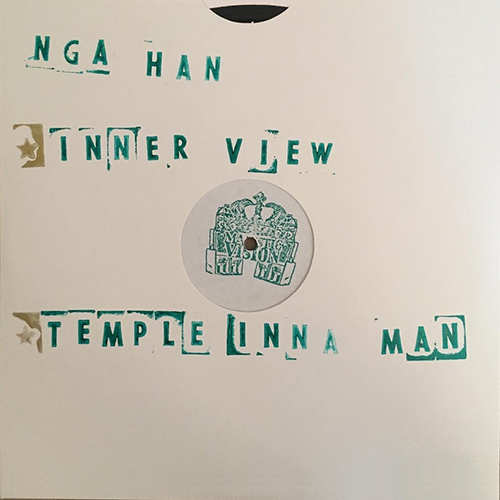 Nga Han, the roots reggae singer/songwriter/multi-instrumentalist who hails from Green Hill, St Ann, Jamaica, has unleashed another worthwhile effort, this time a 10″ vinyl release produced by Majestic Vision Soundsystem out of the UK in collaboration with Netherlands-based Roots Unity Music, the production team and label behind the artist’s great 2020 album The Living Stream: Chapter One.

Coming as a limited edition of only 50 copies, but nevertheless also available as digital download, the 10″ vinyl single features the meditative vocal cuts Inner View and Temple In A Man, which were recorded earlier this year in the UK and will also be part of Nga Han’s forthcoming full length album, slated for release late 2022/early 2023. Both vocal tracks are followed by their own dubbed out version.

When you’ve dropped the needle at the beginning of the track Inner View and the music starts to leap off the speakers it doesn’t take long to know that Nga Han has recorded a song that absolutely thrills. Immediately Inner View becomes one of the strongest songs heard from this spiritual roots revivalist. Previous releases have shown that he’s a great lyricist and Inner View as well as the other track called Temple In A Man affirm that once again. And also musically this platter leaves nothing to be desired. The riddim underpinning the mighty Inner View is tightly played and benefits from the sound of the horns blown by Dave ‘King David Horns’ Andrews (Trombone) and Cyrus Yeomans (Trumpet). Together with Inner Dub, this majestic side of the vinyl platter creates big big vibes!

On the other side, Temple Inna Man needs a bit more listenings to get the full appreciation it surely deserves. Although the lyrics are interesting to listen to, it’s the riddim of Temple Inna Man that doesn’t instantly has great appeal as it has a more babbling sound. After several spins, Temple Inna Man literally stands up and simply fully deserves to be qualified as a convincing effort worth hearing – and so is Temple In A Man Version.

This release is recommended to the roots purists.