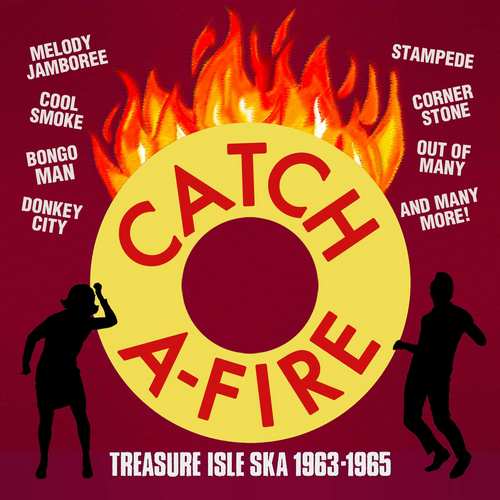 This 2CD collection comes with 47 tracks from the Treasure Isle archives and features the cream of Jamaican Ska music. It contains 23 tracks new to CD and by 1963 Ska was the first indigenous style to achieve international success from the island. It also contains Jamaican R&B tracks from the catalogue of Duke Reid and the recordings were released on various labels in the UK as 7″ vinyl singles. As with all Doctor Bird collections, we take a look at a selection of the various tracks.

1: DONKEY CITY PART 1 – Baba Brooks & His Band. Starting off this disc we have one of the true Jamaican legends along with his band on this self-penned instrumental from 1964 on the Dutchess label in Jamaica. Pleasant jump rhythm and a cross between Blue Beat and Ska. Top-rated trumpet from Baba and an all-around top opening track. Not previously released in UK. 4: COUNTRY TOWN – Baba Brooks & His Band. Baba again on a Ska instrumental, self-penned again. This is a catchy sound on which we hear as always his wicked trumpet playing and simple as it may be it gets the feet-tapping. Original UK release Blue Beat. 7: CONQUEROR – Stranger Cole (with The Baba Brooks Band). Written by Stranger and Gladstone Anderson it is a pure Jamaican sound on which the artist shows off his soulful vocal talents. The rhythm track is straight and it ends up as a damn good tune. Other releases of this have the vocal credits down to Stranger and Gladys and it is a duet of the same song. Original UK release Island. 9: JFK’S MEMORY – Don Drummond (with The Baba Brooks Band). The composer of this tune is unknown. This comes as a Blue Beat number with Don full-out on his trombone. Catchy number and found on various vinyl/CD pressings over the years. Released on Island in the UK. 12: MELODY JAMBOREE – The Baba Brooks Band. This is a familiar tune being ‘Melody Amour’, recorded by many artists over the years and came as the B side to ‘Spider’ on 7″ vinyl. Back in 1964. Real name Oswald Brooks and born in Kingston in 1935. This has a jazz feel and a shuffling beat. Released on Black Swan in the UK. 15: NOTHING TRIED – Stranger Cole (with Tommy McCook & Lloyd Brevett). This has a long instrumental intro before Stranger comes in with his usual soulful vocal. Nothing outstanding about the rhythm track just a good Blue Beat number. Original UK release R&B. 18: OUT OF MANY – Stranger Cole (with Tommy McCook & Lloyd Brevett). Self-penned by Stranger this is a tune with Bluebeat overtones and as always Stranger is full-on with the vocal. Having two of The Skatalites group on the rhythm track is a bonus. Original UK release R&B. 21: SAILOR BOY – The Melody Enchanters. This comes with an unknown writer and is early Ska. 1963 saw this release by artists probably not known by most Jamaican music fans. Produced by Dule Reid, it has fine musicianship. Original UK release Black Swan. 23: LITTLE BOY BLUE aka BLU BOY – Stranger Cole. Written and performed by Stranger it starts with some fine percussion before moving into a fast Ska number. Trumpet mid-way through could be Baba Brooks and a punchy sound. Original UK release Black Swan. 24: DONKEY CITY PART 2 – Baba Brooks and His Band. Following on from Part 1, the opening track on this disc and not dissimilar. Infectious trumpet playing from Baba as expected. No original UK release.

1: CATCH A-FIRE – Baba Brooks & His Band. Baba Brooks played trumpet with The Eric Dean Orchestra and on this, he shows off his classy trumpet playing. Naturally, this comes as the collection’s title track and is a fast-moving sound. The track was also used on the vocal recording, ‘Carry Go Bring Come’ by Justine Hinds. Original UK release Island. 4: CORNER STONE – Don Drummond (with The Baba Brooks Band). The Satchmo of Jamaican music maybe, Don Drummond here on a mid-tempo slice of cool Ska with top trombone playing. May be familiar to the listener as it was a well-known Drummond release and is a very catchy sound. Original UK release Island. 7: PUNCH YOU DOWN – Joe White & Chuck Berry as Joe White & Chuck Joseph (with The Baba Brooks Band). This is a belligerent sound from Joe White and a name change for Chuck Berry, obvious why. Written by Duke Reid and Tommy McCook this is based on the song ‘Walls Of Jericho’ and it lends itself well to this vocal Ska version. “Chuck Berry sings Ska, I think not”. Original UK release Ska Beat. 10: TEARS ARE FALLING – Dorothy Reid & Bonnie Frankson as Dotty & Bonnie. This duet do a fine job on this fast-moving Ska number on which they are backed by Baba Brooks & his band. It has an unknown writer but nevertheless is a catchy sound and deserves its inclusion on this collection. Original UK release Island. 13: MY BUSINESS – Duke Reid (with Tommy McCook & The Skatalites). Good to hear the legend that is Duke Reid on this fast moving Ska sound, on which he is backed by legends of Jamaican music. This release has been credited to Lord Tanamo at times, not sure why and one wonders why The Duke didn’t sing and release more of his own vocal tracks as his voice lends itself well to the Ska sound. Original UK release Ska Beat. 16: COOL SMOKE – Don Drummond with Baba Brooks & His Band. Fast moving classic Ska number from 1964 with the usual trombone sound from Mr Drummond. This was the flip-side to The Techniques’ ‘Little Did You Know’. Original UK release Island. 19: MY LOVE FOR YOU – Owen & Leon Silvaras (with Roland Alphonso). Owen and Silvaras were brothers and on this R&B sound that is like some of Derrick Harriott’s tracks. They combine together to bring the listener a different genre to most of the other tracks on this collection, it comes from 1964 and was written by the duo. Original UK release Island. 22: I’LL KNOW – Bonnie Dorothy Reid & Bonnie Frankson as Dotty & Bonnie. The writer on this is unknown, this is another track that comes as an R&B sound and they duet well together. Some fine guitar playing mid-way through. R&B became popular in Jamaica in the mid-’60s and suited many of the artists recording at the time. It comes from 1964 and is a refreshing change of genre. Original UK release Island. 23: TWO OF A KIND – Derrick Morgan & Naomi Phillips as Derrick & Naomi (with The Baba Brooks Band). A fast-moving Ska track with one of Jamaica’s legends and an artist that many will probably not remember. Once again the duo performs well together and mid-way through we hear the classic trumpet sound of another legend, Baba Brooks. Fine track to conclude this collection. Original UK release Island.

In summing up this collection it is the final collection featuring the history of producer Arthur Reid and his career as the man who had an ever-growing record business. Reid did not have his own recording studio but kept up with the Ska scene as one will appreciate from this collection of classic tracks. 48 tracks make up this collection featuring Ska and R&B from a top producer. Not all tracks will be familiar and many have not been available on any format for nearly 60 years. Having said all this one has to praise Cherry Red Records and the team for putting together another class collection and all self-respecting original Ska fans would do well to include it into their music collection. At £12 99p it is a good-value collection.

Stranger & Ken – We Are Rolling