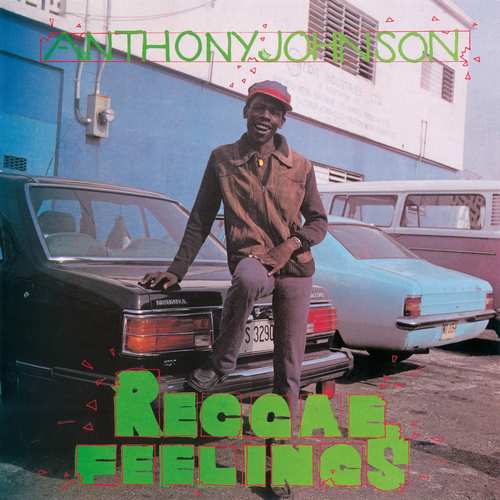 Born in Kingston, Roy Anthony Johnson was raised by his mother in a tenement yard in the heart of the notorious Trench Town ghetto. Biah’s yard at 15½ James Street was significant in Johnson’s development as an artist and musician. This yard, owned by an Indian who had moved to Kingston from Cuba, doubled as a popular dance hall on weekends and holidays. Some of the big sound systems of the era, including King Tubby’s, played at dances in Biah’s yard. Many of the top Jamaican singers of the time were also from Trench Town, and Johnson took inspiration from the likes of John Holt, Dennis Brown, and Alton Ellis, regularly visiting the latter’s yard in nearby White Street. When political violence escalated in Kingston, Johnson moved away to Montego Bay, where he stayed with Ellis’s younger brother Irving. While there he sang with Irving’s steel band, which performed at local hotels. When Johnson moved back south, he lived in Portmore, where he befriended Carl Bradshaw and played in his backing band.

In the mid-1970s, he began auditioning at Kingston’s studios along with his friend Horace Grassett (better known as Badoo). His first recording was Free Black Man for producer Bunny Lee, although this was not released; Lee did, however, suggest that Johnson drop ‘Roy’ from his name, and he has performed as Anthony Johnson since. He went on to record for the Hoo Kim brothers at Channel One Studios and was sufficiently successful that he could buy a guitar. Johnson spent a lot of time at the Rasta camp on Selassie Drive, where he met Les Clarke and Balvin Fials, with whom he formed the vocal trio Mystic I. They recorded several tracks with Linval Thompson, which he released without their knowledge as the album Mysterious in the UK in 1979. The group then recorded three tracks for Lee “Scratch” Perry at his Black Ark studio, with Forward With Jah Orthodox released by Perry as a single on his Black Art label. Ongoing solo, he recorded for several of the top Jamaican producers, most at Channel One Studios, including Linval Thompson (Africa”, Life Is Not Easy), Henry “Junjo” Lawes (Let Go This One, Now I Know), and Harry J (Follow Them Footsteps), but had his greatest success working with Nkrumah Manley “Jah” Thomas who produced his first big hit in 1982 with Gunshot, which pleaded for a cessation of the so-called “shotta” mentality and together with Triston Palma’s Entertainment was critical to the development of the dancehall style. The single was followed by Anthony Johnson’s debut album of the same name. Johnson continued to record for deejay turned record producer Jah Thomas, which led to the release of Reggae Feelings, released in the UK by Vista Sounds.

The 10 tracks featured on Reggae Feelings take the listener back to the mid-period dancehall music when its style was rough, raw and rugged. This classic ’80s dancehall album was recorded at Channel One with Errol “Flabba” Holt’s band the Roots Radics, who provided some really heavy riddims across which the singer covered various topics Which at the time were popular among dancehall patrons. Mixing was done by Winston “Professor’ Brown at King Tubby’s. Side A kicks off with the message tune Fussing & Fighting, certainly one of the finest tracks to be heard on this album. The riddim used for the solid Run Too Much is the same as the one used for the Linval Thompson produced Barry Brown tune Love Is What The World Want from 1981. And also the riddim for the tuff Natty Dread Come In A Dance comes from a Linval Thompson production, in this case, Wayne Wade’s 12″ single African Monica. Natty Dread Come In A Dance is a big tune and thus a great listen. The solid Reggae Feelings is underpinned by the riddim known from Prince hammer’s self-produced song King In A The Ring found on the 1982 LP Africa Iron Gate Showcase Swapping riddims between producers wasn’t a rare phenomenon as it happened quite often. Don’t overlook the lovers piece Baby Your Loving, because this one is another great tune on a tuff riddim. The other side of this vinyl platter features more dancehall niceness, starting off with the boom tune Dread Locks, which is followed by a moving ode to his mother, whom he thanks for keeping him away from wrong every day. It continues with the wicked Loving You, followed by the really nice sounding Settle Down. Underpinned by a familiar sounding solid riddim, the great Sitting Everyday comes in fine rub a dub style.

Natty Dread Come In A Dance