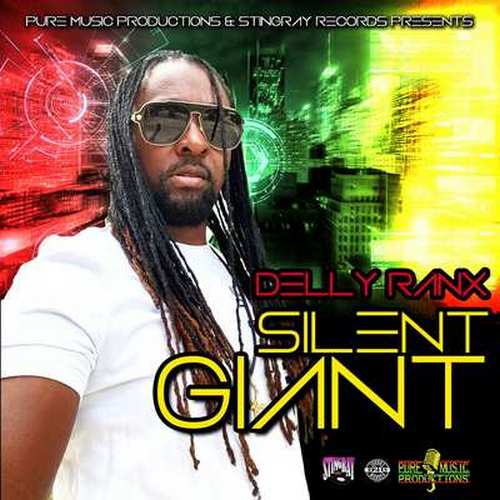 Born Delroy Isaac Foster, Delly Ranx has been active in the Jamaican dancehall reggae scene since the early 1990s. Starting off as an artist, Throughout the last decade of the past century, he recorded for a variety of producers and was successful in Jamaica and abroad with major hits, like Pon Di Corner with Mega Banton, Redbull And Guinness, Ghetto Whisky, Solid, and the remake of Love and Devotion with Jimmy Riley. The singjay then started to combine his skills as an artist with developing into a successful producer. It wasn’t until 2007, that he finally came up with his first album Break Free. Fifteen years later, Delly Ranx adds a new studio album titled Silent Giant to the seven albums he already has under his belt.

Co-produced by his own Pure Music Productions imprint and UK-based Stingray Records (with whom he recorded his 2018 Reggaelution EP), Silent Giant is Delly Ranx’s first full-length reggae project featuring eleven tracks with strictly clean lyrics and a whole heap of refurbished foundation riddims. Besides charming the ladies with songs like Special Lady and Good Looking Girl, he also treats the listeners to several message tunes. The first track, Mama Love – an ode to his mother – is done in typical Stingray fashion, which surely will be appreciated by those familiar with Stingray productions. It’s followed by another ode, this time it’s his Special Lady who makes him feel so good and nice when he’s around her. The third track of the album’s opening part, Settle Down, also touches on affairs of the heart. These first three tracks are underpinned by riddims that sound very familiar to the ears as they are relicked versions of classic riddims.

Next comes the powerful Battlefield which carries a totally different vibe and fires on all cylinders. Big tune fi sure. With Sound Clash Start we’re taken to a clash in the dance hall. A nice tune delivered across a revitalized Studio One backdrop. Delroy Wilson’s Run Run riddim, also from Studio One, is revisited for the solid ganja piece High Grade. It’s followed by the gorgeous I’m Leaving, a tormented sung lover’s piece that one can relate to. Again time for a herb song, this time Delly Ranx tells about the adverse effects the legalization of herb causes. The Death In The Arena riddim, originally by Roland Alphonso & Soul Vendors, is the riddim that underpins Good Looking Girl, while Modern Flex is performed over the sweet Queen Majesty riddim. With the last track, Di Chant, Delly Ranx delivers a Rastafarian anthem with solely Nyahbinghi drumming backing his incisive lyrics.

Delly Ranx’s new album is a big deal and a pleasure to listen to for fans of good reggae music.

Conclusion This album is a big deal and a pleasure to listen to for fans of good reggae music.