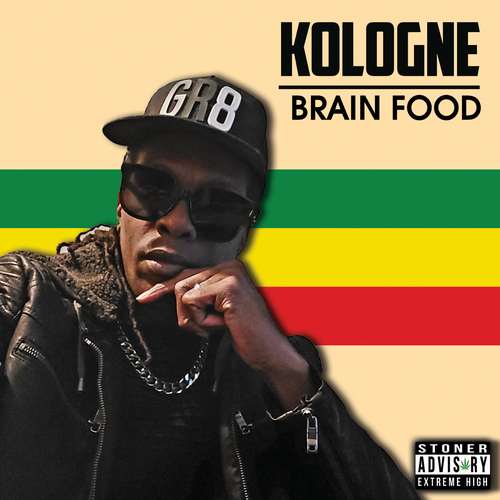 1. Burn Down Babylon
2. Freedom
3. Brain Food
4. It Must Be The Most High
5. Place On Fire
Kologne, also known as Cologne & Singing Cologne, was born Oral Kirk Brown. He grew up in the countryside in Linstead, Jamaica and started to sing at school, where he joined the school choir and became the lead singer not long after. In 1988 he linked up with producer Fatis Burrell and for many years he honed his skills. In 2007 he joined Sizzla on a European tour, which was a major boost in his career. In 2018 he releaesed the EP Ease Off and 2019 saw the release of a new full-length album entitled A New Chapter. The album contains 14 tracks and features two collaborations; one with Turbulence and one with Juicy Badness.

Nowadays he resides in Belgium where he frequently performs with The Beljam Rockers. This band, founded by five enthusiastic and experienced Belgian musicians, forms his permanent backing band. A few weeks ago we received Kologne’s new EP, –Brain Food– recorded with and partly produced by these Beljam Rockers, in collaboration with Puur Live Entertainment. Engineer was Kevin Lennon @ Kbase Music in Jamaica. This five track EP is self-published.

We were already familiar with the fact that Belgium is an excellent breeding ground for reggae, as witnessed by the productions of Panache Culture, Pura Vida, Collieman and the Skyblasters. After listening to these five tracks, we can safely add The Beljam Rockers to this select group of names. We were also familiar with Kologne’s vocal qualities, a fine singer with an appealing vocal delivery, which sometimes reminds us of Admiral Tibbet, and that should certainly be taken as a compliment!

Five roots reggae tracks, with inspiring lyrics, carried by the playing of the tight backing band, in which Kologne’s voice fits in seamlessly. We hear four original, tasty riddims, while Place On Fire cleverly uses the bass line of the Jamaican classic riddim, Things And Time. The songs are all catchy, skanking and quickly invite you to hum along. We cannot point to a weak number. From the opening notes of the opening track, Burn Down Babylon to the closing track Place On Fire, it’s all Irie Vibes! This really tastes like more….