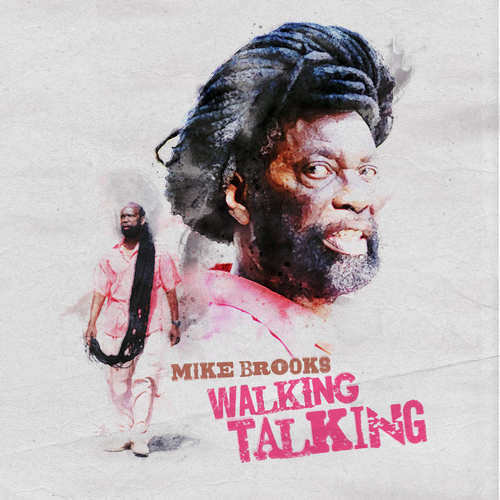 Veteran Jamaican artist and producer Mike Brooks comes up with a brand new album named Walking Talking, which includes thirteen songs – most of them never heard before. Participating in laying down the backdrops are Jamaican musicians like Kirk Benett, Dean Fraser, Bongo Herman, and Delroy ‘Pele’ Hamilton (of Raging Fyah), and the Swiss bands The 18th Parallel, The Dubby Conquerors, and One Camp Crew. Furthermore involved are people like the late Robert Dixon aka Bobby Digital, Dougie Wardrop, Gaylord Bravo, and Lloyd ‘John John’ James.

Mike Brooks has been in the reggae music business for more than 50 years, both as an artist and producer. In the late ’70s, he founded the Teams label with his long-time friend Patrick ‘Jah Lloyd’ Francis. It was at Channel One Studio that Mike Brooks really made his mark as a producer, creating riddims with the famous studio band The Revolutionaries between 1974 and 1977. Among the tracks produced during this time was The Mighty Diamonds’ classic Shame and Pride. His production skills took him to Duke Reid’s Treasure Isle Studio, where he produced Pat Kelly’s Night And Day with the flip side being Jamming So – voiced by deejay Trinity. Mike Brooks’ production credits include artists like Blacka Morvell (Wonderful World), Earl Chinna Smith & Soul Syndicate (Cool Running), Gladstone ‘Gladdy’ Anderson (Holly Mount Zion), Bim Sherman (Down In Jamdown), and Bobby Melody (Hunger And Strife). During the early ’90s, he moved to London, where he became an active and indispensable force for reggae music in the UK.

After being a member of an obscure band named The Tots, Mike Brooks pursued a solo career and released high-quality hits throughout the ’70s and ’80s such as Guiding Star, Come Sister Love, Grooving, Open The Door and What A Gathering, and several albums. His latest full-length album, Walking Talking, is largely one of pure excellence! Gifted with one of Jamaica’s best falsetto voices, the singer Mike Brooks fully shines on each and every track. Add to this the expertly played riddims and the excellent production work of Elia Salomon, Michele Bochicchio, and Mike Brooks for One Camp Records and Fruits Records (Mother Earth), and you have an album that is really a joy to listen to from beginning to end. The music on this set ranges from Roots Reggae and Rub A Dub (Respect, Mother Earth, Positive, King Man), to Ska (Ruff & Ready), Soul and R’n’B (Love You For Sure, Walking Talking, Just The Hype) to dancehall (I’m A Superstar). Lyrically the songs deal with love, respect, happiness, and even Clarks shoes, a brand for which he works as a salesman.

The album opens with an outstanding track called Respect, which is particularly delightful and instantly attracts the listener’s attention to never let loose again. The same goes for the next tune, the previously – by Fruits records – released single Mother Earth, in which Mike Brooks delivers a strong environmental commentary on a gorgeous stepper riddim. Next comes the soulful title track Walking Talking, a fine effort with some very distinct qualities. Introduced by Barrels Skit, it’s Mike Brooks’ previously released single I’m A Superstar which lets him act as a singer as well as a salesman of Clarks shoes whereby he expresses the feeling that every Jamaican can feel like a superstar with the latest shoes on his feet. When the superb Just The Hype leaps off the speakers it’s ‘Reggae meets Soul’ in a very appealing way. A song that undoubtedly gets stuck in your head. In the uplifting Don’t Worry, Mike Brooks expresses not to worry about a thing as in life things don’t go the way you want them to be sometimes. The next three tracks are solid Reggae offerings throughout with perhaps the gorgeous Positive being the most appealing. One that definitely goes on repeat is Love You For Sure. Here Mike Brooks’ falsetto voice comes to full expression on a riddim that carries a Jazzy feel, not least because of Vivian Scott’s wonderful trumpet playing. A Different vibe and feel come in next with the cheerful sounding tune King Man, which is continued by the album closer Ruff & Ready.

Conclusion This is a strong album from an underrated singer veteran. Highly recommended!