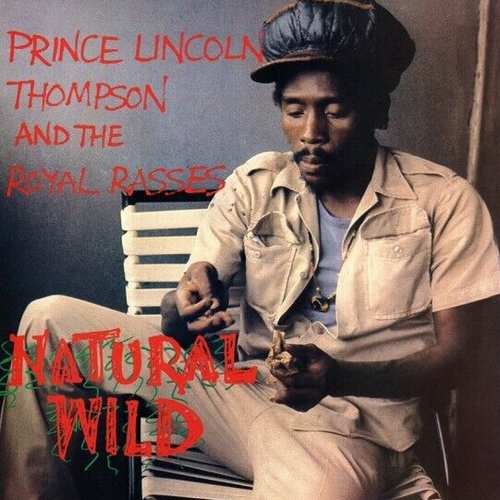 Side A
1. Mechanical Devices
2. Natural Wild
3. My Generation
4. Natural (Reprise)

In a short space of time, Burning Sounds has reissued four Prince Lincoln Thompson LPs. After first having re-released the remastered version of the 1979 LP Humanity, they followed it up with Ride With The Rasses on red vinyl, Natural Wild on green vinyl, and Experience..! on yellow vinyl. Having already reviewed Humanity, Ride With The Rasses, and Experience..!, it’s now time to take a closer look at Natural Wild, a 8-track LP from 1980 that was recorded at Island’s Basing Street Studio in Notting Hill, London, and was produced by Prince Lincoln Thompson and hit making British rock musician & singer Joe Jackson. The first and third track on Side A & B are produced by Prince Lincoln Thompson and feature musicians like Mikey “Boo” Richard (drums), Bertram “Ranchie” McLean (bass), Ansel Collins (organ, grand piano), Aswad’s Tony ‘Gad” Robinson (synthesizer) and Radcliffe “Dougie” Bryan and Willie Lindo (guitar). The rest of the tracks are produced by Joe Jackson and feature musical backing by the members of his band.

To be fair; recalling the controversy working with Joe Jackson caused at the time and knowing the LP turned out to be a commercial flop, expectations were very low when the needle fell into the first groove of the vinyl record’s A side. After having listened to each and every track on both sides, it’s clear that this isn’t one of Prince Lincoln Thompson’s best albums, but this doesn’t imply at all that this LP is not worth giving a listen. Natural Wild certainly has its moments and in some cases it simply takes some time to grow on you. However, it’s Prince Lincoln Thompson’s distinctive soaring voice above his own harmonies and the lyrics that in the end make the difference. Although the four Joe Jackson produced tracks don’t sound totally out of order, it are the other tracks that leave the best impression in the end. In paerticular Mechanical Devices and People Love Jah Music are good to hear with the latter of the two being the better of them.

As said, Natural Wild isn’t one of the artist’s best albums but nevertheless, it shouldn’t just be brushed aside when you come across this vinyl platter.