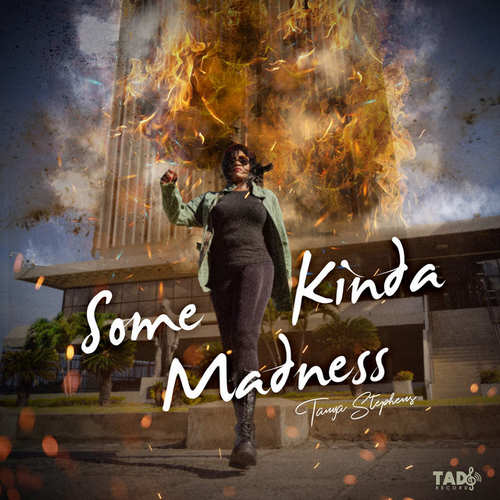 Fans as well as reggae aficionados have been waiting a very long time for Tanya Stephens’ follow-up to her ninth studio album Guilty which came out in 2013 on Sanctum Entertainment and was distributed by VPal Music. But although it took her quite some time, it finally happened thanks to a collaborative effort between Tanya Stephens and producer Tad A. Dawkins Jnr. Exclusively done for Tad’s Record Inc, the veteran singer-songwriter’s album Some Kinda Madness is a massive project which features no less than twenty tracks.

Born Vivienne Tanya Stephenson in the rural parish of St. Mary, Tanya Stephens grew up in St. Mary and St. Ann, attending Zion Hill and Ocho Rios primary schools and St Mary High. Throughout most of her schooling, she showed no sign of pursuing a musical career; her introverted nature kept her close to her schoolbooks until her final year when her interest in singing was sparked by going to dances. After graduating she started to take things more seriously and began the arduous task of going to studios, walking in, and saying that she liked to sing. After a string of knockbacks, she returned to Grove Music studio in Ocho Rios which she has tentatively investigated whilst still attending school. Producer/musician Barry O’Hare heard her sing and invited her to join the Grove Music family. There she recorded the single Big Things A Gwan – in 1994 followed by an album of the same name – which established her name in the public arena. Ten years after her debut album and with four more albums under her belt, she reached notable heights with the excellent Gangsta Blues album which was very popular and really pushed her to another level of stardom. And just two years later she hit back with Rebelution, yet another master class of a record. Tanya Stephens was amongst the most popular stars of the genre for a time and while things have changed from then, those two albums and the work which constructed them are impossible to forget. When it comes to lyrics, Tanya Stephens has very few peers. Without a doubt, she’s one of the island’s most gifted songwriters and for that reason, she deserves not only attention but some level of respect as well.

The twenty songs that are featured on Some Kinda Madness take you on a wild ride through the mind and music of one of Jamaica’s most celebrated artists. Tanya Stephens is a woman who’s been through a lot, and as a result, is immensely strong, confident, and unconventional, which can also be heard and felt on her brand new album. Previously released tracks from this project include the steel pan-driven Zig Ziggler, the heartfelt ballad World Goes Round, the moving hit song Diamonds In The Sun which features Cedella Marley and Diana King, and the collab with Patra titled Fifty. The album starts with Be Who We Be, a tune that gives listeners forewarning that they’re about to enter Tanya Stephens’ zone; a place where she will not be told how to think, feel or behave. From there the artist treats us to songs like Intervention, Too Much Party, Zig Ziggler, Aloe Vera, Jezebel featuring Sabrina Qureshi, and Fifty – all centered around intimate relationships and having a good time. She gets serious on Weight In Gold – a solid reggae tune done with Nadine Sutherland and then continues with a series of reggae songs like Not Today, Feels Like Love, Reset featuring Big Youth, and Some Kinda Madness featuring Singer J. All of these songs come across relicked versions of classic riddims such as Israel Vibration’s The Same Song and Horace Andy’s Every Tongue Shall Tell. A few acoustic and world-beat riddims are added in as can be heard while listening to songs like World Goes Round, So Damaged featuring Tanya’s daughter Kelly Shane, Serendipity, River, and Diamonds In The Sun, which addresses domestic abuse. Things are rounded off with a bonus track, the tuff tune called Silence. This album has songs that will automatically induce good feelings, but it also has tunes that will make you stop and think.

Tanya Stephens’ much anticipated new album largely lives up to expectations not least as it contains several big pieces of candy for your ears.

Conclusion This 20-track album contains several big pieces of candy for your ears.