The Heptones – Better Days & King Of My Town 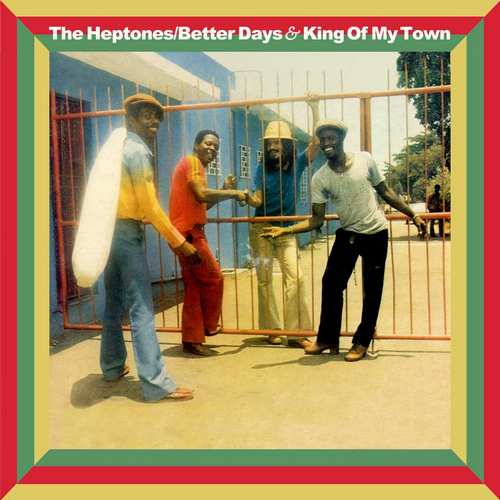 THE HEPTONES ‘BETTER DAYS’
1 Suspicious Minds
2 Crystal Blue Persuasion
3 Land Of Love
4 No Bread On My Table aka Oh Jah
5 Better Days
6 God Bless The Children
7 Ready Ready Baby
8 Every Day Life
9 Mr. Do Over Song
10 Key To The Heart
PAGE ONE & THE OBSERVERS ‘OBSERVATION OF LIFE DUB’
11 Mind Blowing Dub
12 Persuasion
13 Love In The Land
14 Nuff Bread On Our Table
15 Africa’s Times Now
16 Jah’s Children In Style
17 Ready For It
18 Way Of Life aka Life Every Day
19 Observer’s Style
20 Lover’s Dub

This collection was recorded for producer Niney and includes all recordings for the producer. The Heptones were one of Jamaica’s most popular vocal groups of the ’60s and ’70s. By 1978 the group was comprised of Earl Morgan and Barry Llewelyn along with new member Naggo Morris and started n extremely fruitful working relationship with Jamaican producer Niney. This collection includes a selection of bonus tracks, the first disc contains Dub mixes and the second the discomixes.

1: SUSPICIOUS MINDS. This Elvis cover version lends itself well to the laid-back Reggae rhythm. Combined group vocals are smooth and clear and is probably the best Reggae version of this song. Awesome. Released in the UK on Banana. 2: CRYSTAL BLUE PERSUASION. This is a cover version of the Tommy James & The Shondells hit and The Heptones come up with a fine version. This comes across as a tune made for this outfit and again it comes with group vocals along with a laid-back rhythm track. Released in the UK 3: LAND OF LOVE. This is fast-moving, pure Reggae sound with a catchy make-up. The rhythm is toe-tapping and at 2mins 59secs it’s rather short for such a classic sound 4: NO BREAD ON MY TABLE aka OH JAH. This track is slower than the previous and has a chug-along rhythm. It comes with a main vocal and has the rest of the group on backing vocals. 5: BETTER DAYS. As the album’s title track it is a slow number and goes back to having group vocals. The rhythm track is straight and has a catchy feel. The Heptones at their best. 6: GOD BLESS THE CHILDREN. Also recorded by Nicky Thomas this will be familiar to many Jamaican music fans. There is a recording of this song by The Heptones on the Prince Buster label on which it is the B side with ‘If I Ruled The World’ by John Holt as the A side from 1972. 7: READY READY BABY. Starting off with a strange intro like a phone it moves into a slick Roots Reggae sound with Barry Llewelyn on main vocal with the other group members helping out on backing vocals. Nice bongo drums on the backing track. 8: EVERY DAY LIFE. This is not an out-and-out Reggae sound but has a slight Dub feel. The vocal is clear and classy and some fine piano on the rhythm track. 9: MR. DO OVER SONG. This is a slower number with a haunting rhythm track. The overall sound is not unlike a Bob Marley recording and has high-quality vocals. 10: KEY TO HER HEART. Mid-tempo number on which we have mostly combined vocals over a Rootsy rhythm. Nothing out of the ordinary, just a classic Jamaican sound and the final track on the original vinyl album.

PAGE ONE & THE OBSERVERS ‘OBSERVATION OF LIFE DUB’.

11: MIND BLOWING DUB. This is a slow instrumental which consists of nothing more than a Dub rhythm, it turns out to be rather a boring recording. 14: NUF BREAD ON OUR TABLE. This is a more up-beat Dub sound and in its way catchy. 17: READY FOR IT. Starts off with a cool rhythm track before going into a Dub sound. Nothing special about this recording. 20: LOVER’S DUB. Mid-tempo sound that will excite Dub fans. As with most Dub recordings, there is nothing complicated about the overall sound.

DISC TWO: KING OF MY TOWN

1: WATCHA GONNA DO ABOUT IT. This is a fast-moving pure Reggae sound on which The Heptones excel vocally. The song was recorded by Doris Troy back in 1964 and The Heptones version stands alongside well. 2: LOSING YOU. Released in 1979 on 7″ this was written by The Mad Lads who one knows nothing about. The actual title of this is ‘I Can’t Get Used To Losing You’, not the song recorded by various other artists in a pop vein. This is a soulful number with fine percussion at various times. 3: BEHOLD. As with the previous track it was released in 1979 on 7″ and comes with a classic lead vocal from Barry Llewelyn along with a backing chorus supplied by the other group members. It is a mid-tempo number that has a catchy lyric and can be found on various compilations. 4: HOLY MOUNT ZION. The original recording from 1979 is credited to Naggo Morris & The Heptones and is a drum orientated sound. On the original release, it is titled ‘Mount Zion’ and is a Rastafarian-based recording and can be classified as Dub/Roots Reggae. 5: MOTHERLESS CHILD. This Roots Reggae number starts with a spoken intro over some fine organ work. It is a mid-tempo cool Reggae sound with a lead vocal and chorus. 6: PRISONER GIRL. This is a rhythmic Reggae song with a somewhat strange intro. Another track that is drum orientated and has another fine lead vocal and a backing chorus. It comes with a Reggae/Lovers Rock style. 7: KING OF MY TOWN. This is a faster track and gives its title to the original album. This was composed by Barry Llewelyn and has all the group members on vocal at various times. Once again bongo drums feature on the backing track. 8: AFRICAN CHILD (JAMAICA). This comes with a wicked riddim and has Naggo Morris on lead vocal. A mid-tempo track on which Naggo gets help on the backing from fellow group members. Produced by Lawrence ‘Jack Riley’ Lindo and appears to have been released in 1979. It comes with a solid bassline and is deep thoughtful Roots music at its best. 9: TRIALS AND TRIBULATION. This is a slow track and out-and-out Roots Reggae. Some class, laid-back percussion on the backing track. Released in 1979 and as with all original album tracks is produced by Winston ‘Niney The Observer’ Holness in Kingston, Jamaica. 10: WHICH SIDE ARE YOU. This is classic Roots and comes with a full-on vocal and has the other group members helping out. Mid-tempo and with a laid-back rhythm track that includes percussion, 3min 2sec of class. 11: A HARD DAY’S NIGHT. Yes, you’ve guessed it a Roots version of the Lennon/McCartney song and it lends itself well to this slower recording. Full of ooh aah’s throughout that contributes to making this a fun sound and obviously easy to sing along to. It is also the final track from the original album.

12: THROUGH THE FIRE I COME. This has an infectious beat and is a fast number. Sung and spoken vocals and a catchy hard to forget recording. 14: BOOK OF RULES. I am sure most Jamaican music fans will know this song that comes with a deep meaning. Barry Llewelyn is up-front on vocal and the other group members are helping out on the backing. There is another version by The Heptones that is faster but this is one of the best ever Jamaican recordings. 16: LOOSING YOU (12″ MIX). This comes as nothing more than an extended version of the song on the ‘King Of My Town’ album and it can be found as track two on this disc. 18: EVERY DAY LIFE (12″ MIX). This is a slow number with a laid-back rhythm track. Naggo takes the lead vocal and this was released on the Observer label in Jamaica. To put this into a category one would call it Dub/Roots Reggae from the late ’70s. This track is the final one on this 2 disc collection.

To sum up, this collection one has to say that there is no doubt that The Heptones come up the ratings amongst Jamaican vocal groups and this collection shows us why. The two original albums are full of great tracks and cover the period 1970 – 1979. As for the bonus tracks on disc 1, they may not be to everyone’s taste but if you are into the Dub sound then the tracks on the first disc certainly will be. The bonus tracks on disc 2 are 12″ disco mixes of the tracks from the original albums.

One has to praise Cherry Red Records and the team for putting together another class collection and all self-respecting Reggae fans would do well to include it in their music collection. At £12 99p it is not a high price to pay and remember it comes with the usual 8-page informative booklet.

Nuff Bread On Our Table

Conclusion The two original albums included on this dbl CD are full of great tracks and cover the period 1970 - 1979.