The Now Generation – For The Good Times 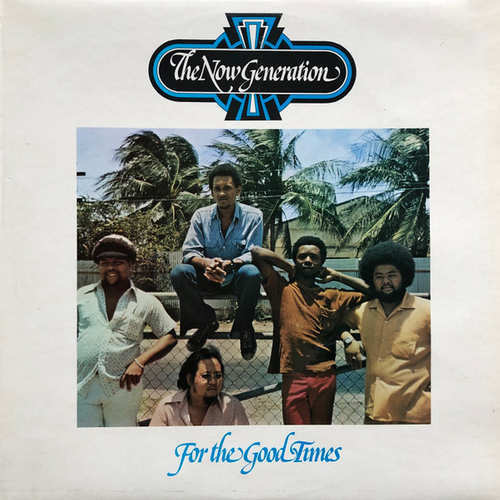 This (super rare) album begins with a track previously performed by the Chosen Few in a reggae style, Children Of The Night. This version is instrumental and simple in construction with rhythm & lead guitar, drums, and organ being used. The Now Generation come in at intervals on and off. Track two is Baby Don’t Do It which was put out on a single performed by the Now Generation and although it didn’t register we have a good sound which again has a simple construction and brass is brought into this to add well. Next is the Perry Como hit and the album’s title track For The Good Times. The song is a good one and it lends itself well to a basically instrumental reggae treatment. The Now Generation do come and go on this and when they do, a good group vocal comes over. Alone Again Naturally is well-known to record buyers and this reggae treatment is first-class. Piano is naturally used and the Now Generation vocalise well when they come in. The organ and brass used in the backing go together very well and here we have what is my favourite track on this album. The Stylistics had a hit with the next track, Stoned In love With You, which has a simple construction with organ, drums and guitars being the instruments used. The rhythm is fairly fast and this is a song that has been given the reggae treatment quite a few times and it lends itself well to this. To finish side one we have the Michael Jackson hit “Ben”. The song was very nice originally and the reggae treatment the Now Generation gives it is first-class. Again the construction is simple and very easy to take in.

Side two starts with Guitar Man Reggae and is another British chart hit given the reggae treatment. The outfit known as Bread had a hit with this and here it is given a very nice reggae treatment on which the construction is simple with Moog being the dominant instrument, playing the tune. This is one of the best tracks on the album. People Make The World Go Round is track two and is a number that the Chosen Few put out some while back and the vocals on this version are pretty similar. The backing has a nice balance and is uncomplicated. Nice album track this one. Track three is Everything (Version) which is easy to take in, having a good straight backing and a chorus that sounds rather femine. This could stand a chance when put out on a single. On If I Don’t Get You Back Again there’s some very good instrument playing and first-class vocal work. Nothing very special about the backing but it blends in with the vocal very well. This is another track that is strong enough for singles material and is one of my favourite tracks. You’ll Never Know is track five and this moves along at a brisk pace and contains another good piece of vocal work from the Now Generation. The feature of this is the brass section which adds very nicely to a commercial piece of very pleasant reggae. To finish off the album we have a version of the Carole King hit It’s Too Late on which a funky guitar is present along with another one of the same instrument. This song lends itself well to the instrumental reggae treatment given and although this is a well-known song, here we have a fresh rendition. Good track to finish off with and a high standard is maintained throughout.

Baby Don’t Do It

Children Of The Night

Stoned In Love With You