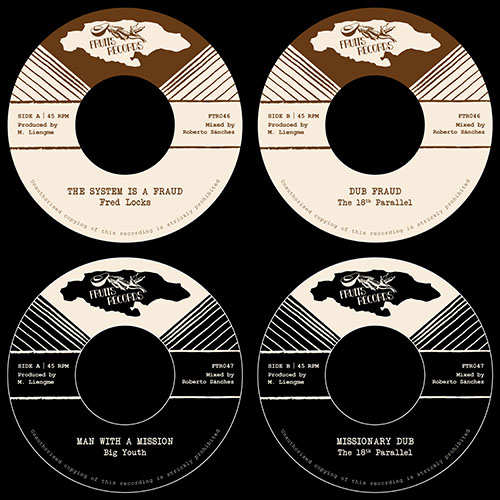 What undoubtedly can be seen as an announcement of the upcoming 18th Parallel album Downtown Sessions (to be released on November 18th) the good people of highly acclaimed Swiss reggae label Fruits Records have issued two brand new 7″ vinyl singles – available as digital download as well. And like they did with previous releases, they’ve engaged guest vocalists from the golden age of Jamaican roots reggae; Fred Locks and Big Youth.

Stafford Elliot, in Reggae circles better known as Fred Locks, is a Roots Reggae singer who’s best known for his mid-1970s single Black Star Liners and the album of the same name, one of the best Roots Reggae albums with some of the big hitting tunes such as Songs Of The Almighty, Vision Of Redemption, Wolf Wolf, Walls, and of course Black Star Liners. In the late 1970s, Elliott was also a member of the vocal trio Creation Steppers, along with Eric Griffiths and Willy Stepper, releasing records in Jamaica on their own Star of The East label, and having a hit in Jamaica with Stormy Night. In 1980, the trio began an association with London-based sound system operator and producer Lloyd Coxsone, who released a number of singles by the group, and also some Fred Locks solo records. For almost 50 years, Fred Locks brings Roots Reggae fans conscious and militant songs deeply rooted in his Twelve Tribes of Israel faith. Back in 2013, The 18th Parallel met him in downtown Kingston to record The System Is A Fraud which has been finally released. Added to the Swiss musicians was legendary drummer Leroy “Horsemouth” Wallace to create another classic stepper riddim especially built for Fred’s vocal style. Also, Maga Lion and Brother Wildman from the Emeterians had their touch on this record by singing backing vocals in the same way Creation Steppers would have done back in the day. Last but not least, Roberto Sánchez created the Dub version that is featured on the flip side. Anyone who loves the sound of the late 1970s shouldn’t overlook this Fred Locks single, which undeniably is a Roots anthem.

The single Man With A Mission follows up Big Youth’s earlier this year released Rockers one drop Long Road on Skankin’ Society Records. This second single features a heavy rub a dub riddim driven by a powerful bassline and again with Leroy “Horsemouth” Wallace on drums. With the addition of awesome horns, a Moog synthesizer, and spring reverbs, the riddim creates a great atmosphere – perfectly suited to Big Youth’s poignant vocals. Interesting is the story of the way the song was recorded. It was March 2013, downtown Kingston, 45 Charles Street at night. Gunshot in the neighborhood, police in the streets, and Big Youth outside the Small World Studio. The artist who’s also named Jah Youth went right to the recording booth, never gave a listen to the riddim, asked the engineer to roll and put his heart and soul into the song: no filter, no second thought, just pure inspiration and message in the lyrics. Everything was done in one take! The final result is a real killer, which is definitely worth going on repeat. And as usual Roberto Sánchez did a great job as a true Dub master with Missionary Dub.

With these two singles, it looks like The 18th Parallel’s Downtown Sessions is going to be a very strong album.

Where to get the Fred Locks

Where to get the Big Youth