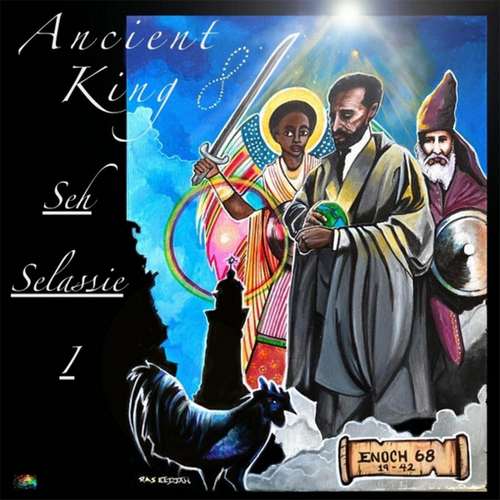 The very first time I took notice of Ancient King from St. Croix was way back in 2005, when his debut album, Conquering Sound [“Give me the chief of staff! Give me the battlefield marshal!”], provided the FIRE portion of I Grade Record’s ‘Fire – Earth – Wind’ promotion (which also featured albums from NiyoRah and Ras Army, respectively). That album, still his opus, carried pieces such as She’s So Awesome, Get the Best, St. Croix Run Red and others which weren’t so hyper-focused (Heading For Failure was on Conquering Sound as well – big tune).

His sophomore set, 2007’s Judgement would feature less in the way of diversity and what we saw was a gradual shift in Ancient King’s music, in retrospect (on the back of Judgement it reads “All songs itected and ivinely inspired by H.I.M.” It tells you all you need to know) (Judgement was probably a better album than it got credit for being in its time. Biggup Full Grown Records). In late 2012/early 2013 (released at the same time as Midnite’s Free Indeed if I recall correctly on Higher Bound Productions), he’d return with another album, perhaps, ahead of its time, the STUFFED Ethiopie. With seventeen selections, clocking in at over an hour and a quarter, Ethiopie had tons of things going on, but the CLEAR centralizing theme was espousing the greatness of Haile Selassie I [“One man stand out: The little short man from Ethiopie. The Tribe of Judah, Haile Selassie”].

During our hiatus, there was album #4, Swords Of Wisdom for Adios Babylon. Quietly, Swords Of Wisdom was a strong release. It featured Ancient King even more ‘stationary’ than we had previously seen him in terms of his lyrical direction. The vast majority of it was directly or indirectly about His Majesty and it was on Swords Of Wisdom where I came to the thought that, although I thoroughly enjoyed it (and, listening to it now, it’s aged well. You can check it out and I may slap a review on it one day), I didn’t think that it was for everyone. I’ll go in more on this in just a second, but Ancient King has a very DIRECT style. Along with his virtually constant subject matter, his delivery is what it is and it doesn’t change much at all. Over the course of an entire album, well over an hour long (in the cases of both Swords Of Wisdom and, as I mentioned Ethiopie) (Conquering Sound was also more than an hour but barely), I can see how that could wear on listeners and that is perfectly fine, it wore on me a bit but, like I said, I like being worn down. I enjoy it and part of my affection for Swords Of Wisdom definitely exists in just how challenging of a release I found it to be.

So, given our ‘history’ together, now dating back nearly two decades, and what he had done in the immediate past, I would be damn interested in hearing a new album from Ancient King and look what the summer of 2022 has brought in. Released just a day before my forty-first birthday is the latest and fifth album from Ancient King, Seh Selassie I, through the St. Croix based Ras Elyment Records. The label is probably best known, as of late, for its 2020 release The Spirit Of Standing Up from Akae Beka (which I will CERTAINLY get around to reviewing one day), but actually has a very RICH and interesting musical history beyond that. Lyndon ‘Ras L’ Williams, a former member of the Midnite band, heads Ras Elyment Records and he’s produced several albums for the pioneering Virgin Islands staple including the likes of Maschaana, Thru & True and Full Cup. So, if you weren’t familiar with their name, if you’ve read this far into a review, you probably do know the work of Ras Elyment’s. Personally, when I noticed who had vibed Seh Selassie I, it made it an even more intriguing project for me and I looked at it as, potentially, a very nice musical birthday gift for myself.

Not only does AK reference my favourite artist he references the title track from an album which, although not regarded as one of his strongest, I absolutely ADORE, Rastafari Teach I Everything. It is a “modern classic” for me (and if only for me, that is just fine) and, given what he says here, especially, I’m assuming that it also registers with Ancient King in a similar way. In His Law does not struggle at all in keeping the vibes high following Give Up Your Soul, although it may take you a few spins through to realize it. I would tell you to maybe focus more on the latter portion of In His Law where it really hits its full stride where the artist delivers a stirring message about the wonders of following the LAW of His Majesty.

Conclusion Seh Selassie I is the finest piece of work Ancient King has produced since Conquering Sound.