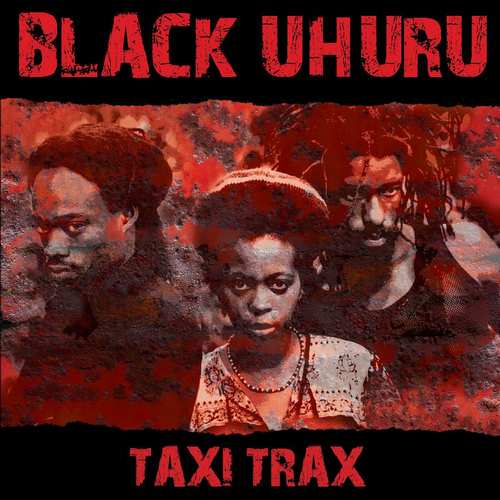 This year, French reggae label TABOU1 celebrates its 25th anniversary. Over the years the label has released about a hundred albums including a notable amount of albums coming from an exclusive alliance with Sly Dunbar and the late Robbie Shakespeare. Amongst them are Michael Rose’s X-Uhuru, Yami Bolo’s Freedom And Liberation, Black Uhuru’s Live 84 and Dubbin’ It live, Junior Natural’s Militant, and Brinsley Forde’s One Fine Dub to name a few. And now, in collaboration with Taxi and Paris-based vinyl specialists Diggers Factory, the label that specializes in “Roots With Quality” Jamaican music has put out a remarkable Black Uhuru dbl LP titled Taxi Trax, a compilation of singles released in Jamaica on Sly & Robbie’s Taxi imprint.

The story of Black Uhuru started in 1972, years before they achieved their international breakthrough in 1981 with the Island Records released third album Sinsemilla for which they had joined forces with Sly & Robbie. The group, formed in 1972, initially as Uhuru (Swahili for ‘freedom’), underwent several line-up changes over the years with Derrick “Duckie” Simpson as the mainstay. Their first release, Folk Song, was an interpretation of The Impressions’ Romancing To The Folk Song. The single, produced by Paul Finlayson-Fuller & George Philpotts for Tommy Cowan’s Top Cat subsidiary wasn’t a success and they split up, with Don Carlos pursuing a solo career, as did Dennis Garth, before joining The Wailing Souls. Duckie Simpson then formed a new version of Uhuru. He recruited Errol Nelson, who had sung with the Jayes and the Royals, on harmonies and a new lead singer, Michael Rose, who had previously released a number of solo singles. In 1977, the group, now taking the name Black Sounds Uhuru, began to record at Harry J’s recording studio with Prince Jammy in the engineer’s chair and a variation of Bunny “Striker” Lee’s Aggrovators session band that included Sly Dunbar on drums and Robbie Shakespeare on bass. It resulted in the release of their Prince Jammy-produced debut album, Love Crisis. The 1977 album proved to be not only a foundation stone for Black Uhuru but also an important stepping stone towards the next stage in their career. Four years later Love Crisis was re-mixed and re-titled Black Sounds Of Freedom and re-released by Greensleeves Records at the beginning of Black Uhuru’s worldwide renown. Meanwhile, Errol Nelson had returned to the Jayes and his place was taken by Sandra “Puma” Jones from Columbia, South Carolina. Her ethereal harmonies added an entirely different dimension to the group.

Sly & Robbie’s recordings with Black Uhuru for their Taxi label began with an interpretation of Bob Marley & The Wailers’ Sun Is Shining (also released on Channel One’s Hit Bound subsidiary), Aquarius with the Tamlins, a reggaefied version of The 5th Dimension’s Aquarius/Let The Sun Shine In from the 1967 musical ‘Hair’, a cover of the oft versioned No No No also known as You Don’t Love Me, and their interpretations of the Wailers classic Let Him Go and Ken Boothe’s Artibella. But Black Uhuru’s real impact on the reggae community took place when the trio began recording original compositions such as Plastic Smile, Abortion, General Penitentiary, Shine Eye Gal, and a new version of Michael Rose’s solo hit Guess Who’s Coming To Dinner. Black Uhuru became the most dynamic and progressive reggae act, releasing three excellent albums with uncompromising roots reggae music that were given international distribution by Island/Mango. Their rather weakest album, Anthem, appeared in 1984 and won the first ever Grammy Award for Best Reggae Album the following year. Musically, this album fused roots reggae and dub with ‘synthetic’, electropop instrumentation and effects, resulting in an ‘ambiance of pop-reggae futurism’. The album’s success led to tensions between Duckie Simpson and Michael Rose, resulting in Rose’s departure from the group. He was replaced by Junior Reid. Puma Jones left the group after the release of the 1986 album Brutal due to ill health (she died in 1990 from cancer).

The first disc of this iconic dbl LP features eight vocal cuts including rarities and singles previously unreleased outside Jamaica. Kicking off with a nicely done version of Dawn Penn’s Studio One classic You Don’t Love Me (No, No, No), the listener is then treated to an unexpected interpretation of “Aquarius/Let The Sun Shine In”, which features the Tamlins on harmonies. This is a really nice inclusion for Black Uhuru completists, but not one that goes on repeat. It’s followed by the rockers style version of Ken Boothe’s Artibella that sounds really good. It’s when Abortion and then the mighty General Penitentiary drop in that we are treated to the so well-known powerful militant music of Black Uhuru and Sly & Robbie. This track, just like all the others featured on this album, comes with the original Jamaican mix which creates a much rawer feel and vibe than the ones known from the international album releases. Side One is rounded off with the group’s excellent version of Bob Marley & The Wailers’ Sun Is Shining. Side Two features three extended Jamaican mixes. It takes of with a blistering interpretation of the Wailers’ 1966 Studio One tune Let Him Go (Rude Boy Get Bail), and then continues with the awesome Guess Who’s Coming To Dinner and the stunning Shine Eye Gal. Two great Black Uhuru tunes that, even when you’ve heard them countless times, never get bored.

The second disc is earcandy for Black Uhuru fans and dub heads alike. They are offered no less than twelve Jamaican dub mixes. Four of them – Happiness, Plastic Smile, Sit And Wonder (No Loafing), and Sensimillia – aren’t related to the vocal cuts featured on the first disc. The dub mixes of Happiness and Abortion are heavy as lead. Both are wicked & wild killer dubs driven by Sly Dunbar’s extraordinary drumming and Robbie Shakespeare’s superb bass play. Next are the dub versions of Aquarius, No, No, No, and Artibella, which lack the heaviness and intensity of the previous two tracks but nevetheless are worth hearing. Side Three comes to an end with a throughout solid dub version of General Penitentiary. Just like Side Three, the other side starts in a stunning way with the awesome dub version of Plastic Smile, which appeared on the flip side of the 7″ single from 1978 on Bunny Lee’s Gorgon Records as Powder Face. It’s then the dubbed-up Sit And Wonder (No Loafing) that takes no prisoners. This is an extremely heavyweight piece with Robbie Shakespeare in top form. Although it looks like it’s going to outmatch the dubs that follow, it surely isn’t the case. The dub version of Sun Is Shining is a very strong effort, while the dub versions of Sensimillia and Shine Eye Gal are in the same class as Sit And Wonder (No Loafing). At the end of Side Four, it’s the dub mix of Let Him Go that rounds things off in a very satisfying way.

Note: TABOU1.com will release the digital version of this album as an NFT on its soon-to-be-launched NFT platform.

Conclusion An brilliant compilation of Black Uhuru singles released in Jamaica on Sly & Robbie's Taxi imprint. Not to be missed!!